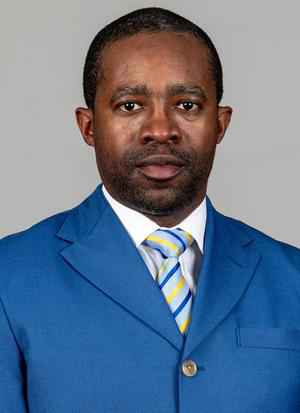 Ivan Lee OLY has been in the sport of fencing for 30 years. It began at the Peter Westbrook Foundation, where he developed and honed a set of skills that would earn him a full scholarship to St. John’s University. While at St. John’s, Ivan won the NCAA National Men’s Sabre title in 2001 and 2002, and led the Red Storm to the 2001 NCAA Team National Championship. He graduated in January 2004 with a Bachelor of Science degree in Journalism.

Ivan has been a referee for 25 years. He officiated his first collegiate meet at Hunter College, while still in high school, and has worked on the local, regional, high school, collegiate, national and international levels. He has been to 10 NCAA Championships, 10 Ivy League Championships and 16 US National Championships as a referee. He is nationally rated in all three weapons, is a certified referee instructor and observer, a member of the Ombuds Committee of the Referees’ Commission and works as a sabre assigner at various North American Cups each year. He has also served as a member of the Directoire Technique at junior and senior world cups held in the United States.

Ivan spent nearly 20 years serving the fencing community through the Public Schools Athletic League (PSAL), the governing body for high school sports in the NYC public school system. He spent 17 seasons as the referee assigner, two seasons as the Assistant Commissioner, and 10 as the Commissioner of PSAL Fencing. During that time, he upgraded the league by changing from a manual scoring system to an electronic one, he raised the funds needed to add epee to the foil-only program, and he ended the co-ed model and instituted separate boys’ and girls’ seasons.

In 2019, while still working for both the PSAL and NYPD, Ivan was offered the Head Coach position at Long Island University,  After accepting the offer, he immediately went to work recruiting, building and raising funds for the new Division I program. In just his second season, Ivan brought LIU the first DI National Championship in school history, as his very first international signee, Hungarian Laura Fekete, won the 2021 NCAA National Championship in Women’s Epee. In 2022, LIU added Men’s Fencing to the program and promoted Ivan to Head Coach of Men’s and Women’s Fencing. Ivan has also worked as the Head Sabre Coach at Long Island Fencing Center in Nassau County, NY since 2019.

In addition to his professional work, Ivan has served several different communities through volunteer work. He currently serves on the board of deacons and administrators at Cambria Heights Gospel Chapel, and is a founding board member of the Roslyn Yalow Charter School in the Bronx. He previously served as an instructor at the Peter Westbrook Foundation for 20 years, a board member of New Horizons Ministries, Inc., a selection committee member of the USOC’s Finding Leaders Among Minorities Everywhere (FLAME) program, and he currently serves on the College Coaches Committee of the United States Fencing Coaches Association.