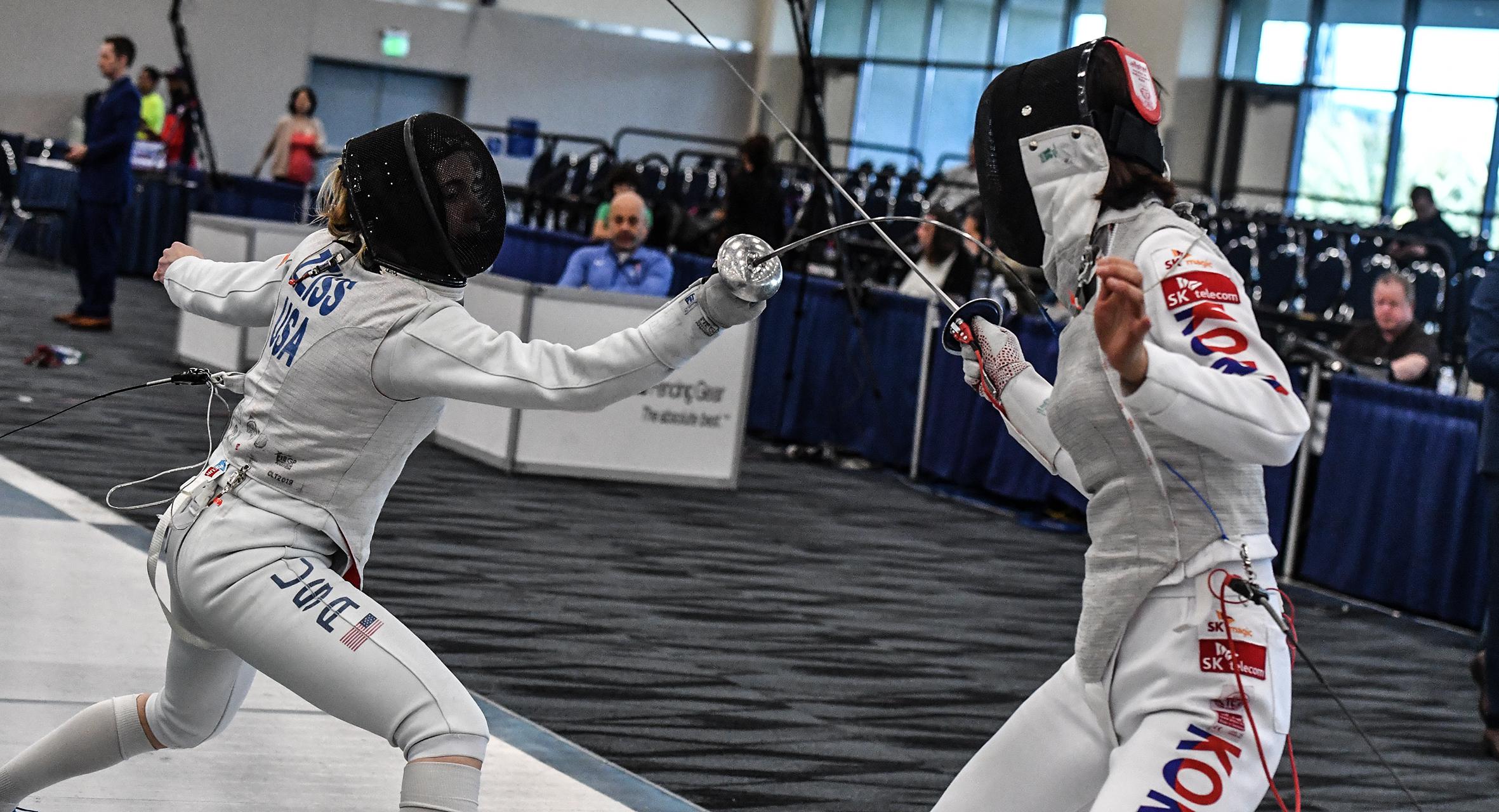 (Anaheim, Calif.) – Team USA will have nine fencers in the table of 64 on Sunday at the Absolute Fencing Gear FIE Grand Prix Anaheim, including four who will be competing in their first table of 64 at a senior international event.

For Zeiss, Sunday will mark her fourth appearance in the table of 64 this season. Although she had a slow start in pools, going 3-3, Zeiss found her rhythm in the direct elimination table as she cruised past two-time Asian Championship medalist Ha Na Oh (KOR), 15-5, and Eline Rentier (NED), 15-3.

A Southern California native fencing approximately an hour from her hometown of Culver City, Zeiss will get to sleep in her own bed tonight and is dealing with both the fun and challenging aspects of fencing on home turf.

“It’s weird. I went to work yesterday. I was checking my pool while I was at work,” said Zeiss, who works for the San Diego Chargers. “It’s an interesting mindset to have to do all the things I would normally do while traveling but do them from home, but it’s cool. I love it. A couple of my friends and co-workers are going to come out tomorrow to watch, which will be fun. I get to show my home world the fencing world and combine the two.”

Massialas is also fencing in her home state. In just her second international tournament this season and her third since 2017 due to injuries, Massialas started the event strong, going 5-1 in pools. In a pool that included teammate Morgan Partridge (Swansea, Mass.), Massialas’ sole loss came to Julia Walczyk (POL), who ranks in the top 20 in the world rankings.

“It was a weird start because I had my Notre Dame and USA teammate in my pool and we started out having to fence each other, so it was a strange start,” Massialas said. “I had a more tricky pool, so I had to focus on very precise, clean fencing, so it took a lot of discipline, but I think overall, I was able to do okay. I wish I could’ve gone 6-0.”

With a bye into the preliminary table of 64, Massialas needed just one win to advance, and she got it with a quick 15-6 victory over Yanan Shi (CHN).

Also conceding just one pool loss was Tieu, who went 4-1. With a dominant 15-4 effort over Alely Hernandez (MEX) in the preliminary table of 64, the 2018 Cadet World silver medalist has now advanced to the 64 at every senior international event she’s competed at this season.

“It was really keeping calm because during my pool, somebody dropped out, and that made me a little bit nervous because it really offsets the proportions, but I had to just keep going and focus on one bout at a time,” said Tieu as to her focus for the day. “I’m really excited because last year I was out after pools, so this is super exciting that I can see my own progress.”

Tan, Rhodes, Zhang and Lam each made her first table of 64 at a senior international event.

“[My key was fencing] like I would fence at practice,” Tan said. “Don’t let the nerves get to me, have clean actions and stick with my actions and be confident in everything I do.”

“I got cut last time, so it means a lot to see how far I’ve come,” Zhang said.

Rhodes and Lam, the youngest members of Team USA at 15 years old, are each competing at their first senior international event and Lam fencing at her first FIE event at the junior of senior level.

“I just told myself to not be nervous because it doesn’t help and I tried to not rush and tried to set up all my actions,” Rhodes said.

“It was difficult. Of course, she’s really good,” said Lam of her bout with Lu. “It took a lot of patience and I had to use a lot of different skills to defeat her.”

Competition will continue on Sunday with the top 64 men and women competing and the gold medalists being crowned on Sunday night.

Race Imboden (Brooklyn, N.Y.) enters the men’s tournament as the World No. 1 and reigning champion with Kiefer seeking to improve on her bronze medal at this event last year.

All bouts will be streamed live at www.youtube.com/fievideo.