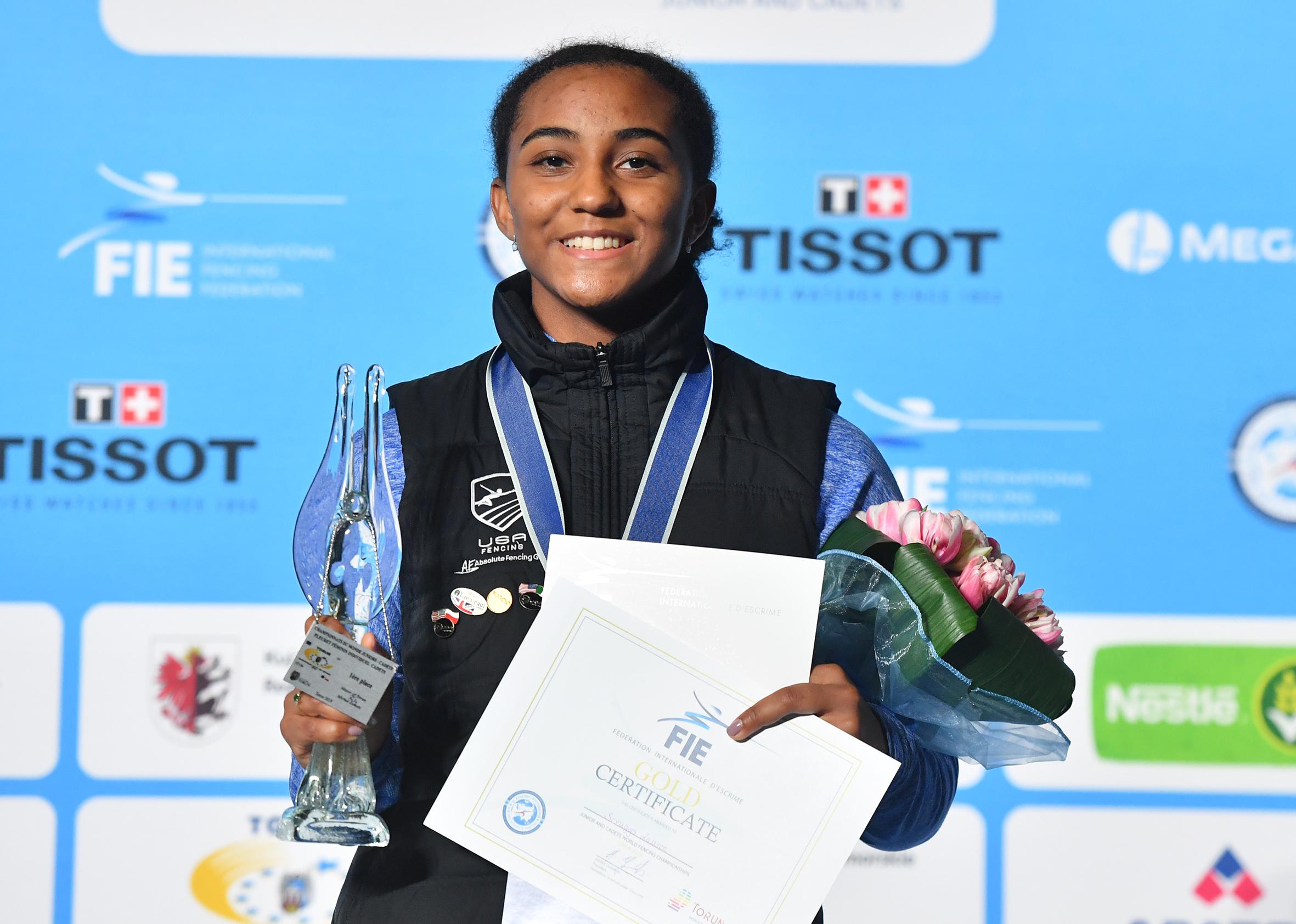 That has been the schedule for Team USA’s Lauren Scruggs (Ozone Park, N.Y.) for the past two days as the 16 year old followed her Junior (U20) World Championships win on Tuesday with a Cadet (U17) World Championship title on Wednesday.

Scruggs is now the only U.S. foil fencer in history to have won both titles at the same World Championships and joins Olympic saber medalists Mariel Zagunis (Beaverton, Ore.) and Becca Ward (Washington, D.C.) as the only Americans ever to have accomplished the feat. Zagunis won the double in 2001 and went on to win Olympic gold in 2004 and 2008. Ward won Junior, Cadet and Senior titles in 2006 and earned Olympic bronze in 2008.

While Yuka Ueno (JPN) won both titles in 2018, the last foil fencer to have done so prior to that was Aida Mohamed (HUN) who won Junior and Cadet gold in 1992 and earned four individual Senior World medals from 2002-2007.

“It’s kind of surreal. I still can’t believe that I won yesterday and this victory right now … I just can’t process it, so to be honest, right now I really don’t know,” said Scruggs who will aim for a third gold in three days on Thursday when she fences in the junior team event. “It feels amazing to win both golds at World Championships. It just shows that my hard work has paid off.”

Returning to the pool rounds at 8:30 a.m. in Poland on Wednesday, Scruggs may have been tired, but she ground through six wins, giving up just four touches total to take the top seed out of pools.

While she whipped through her first two direct elimination bouts with 15-7 and 15-3 wins over Isabela Sedlakova (RUS) and Sara Camacho (MEX), it would be her table of 16 bout that would cause the crowd at the Torun Arena to become the loudest of the week.

Scruggs took on Nicole Pustilnik – an up-and-coming 16 year old who previously represented the United States and won both Junior Olympic titles in February before making her World Championship debut for Israel this week.

Pustilnik became one of the few fencers in Poland to truly challenge Scruggs this week and appeared to have nearly secured the win with a 14-9 lead in the third when Scruggs took the energy level of the building to 10 as she scored the first of the five touches she would need with 24 seconds on the clock.

“At the end, I was like, ‘well if I’m going to lose, I might as well go out with a bash,’’ Scruggs said. “But then after that, my coach was like, ‘no. You can actually win this if you focus and do what I tell you.’”

With 4.9 seconds remaining in the bout, Scruggs cut Pustilnik’s lead to one and then ran her opponent down the strip to score the tying touch with 0.03 seconds on the clock.

The bout went into sudden-death overtime and Scruggs wasted no time, hitting Pustilnik off the line to take the win, 15-14, as her U.S. teammates roared for each action.

“I’m someone who feeds off that energy, so to have them out there is just amazing. It means a lot to me,” Scruggs said.

Scruggs’ next win would come in near silence, however, as she took on teammate Zander Rhodes (South Orange, N.J.)

With no coaches in the boxes and no cheering teammates as the Americans fenced each other, Scruggs built an 11-4 lead over Rhodes during the first period. Rhodes took five in the second, but couldn’t come back as Scruggs won the bout, 15-9 to secure a second podium finish in two days.

The medal would be the third career individual World medal for Scruggs who also won bronze at the 2018 Junior Worlds.

Within 30 minutes, Scruggs would be back on the finals strip, competing against Margherita Lorenzi (ITA) for a position in the finals.

With the score tied at seven in the first, Scruggs reeled off three straight touches to end the period at 10-7. After the break, Scruggs scored the first two hits of the second period and controlled the remainder of the bout for a 15-9 win.

Fencing Sein Hong (KOR) in the finals, Scruggs pulled away to a 9-6 lead after the first period and picked off touches one by one to end the bout, 15-9, to take the gold.

“[I just wanted] to fence how I usually fence, to be honest,” Scruggs said when asked about her strategy going into the final. “My coach and I, we didn’t really know how this other girl fenced, so we said, ‘Just go out there and do you,’ and that’s what I did.”

Scruggs said her final bouts were good stylistic matchups against Lorenzi and Hong.

“I think my fencing style gave me the advantage. I don’t know how to describe it … I think I started getting into my rhythm, my groove,” Scruggs said. “For the first part of the day, I was feeling really sluggish and tired and was really having to strain and whatnot to get into my super beast mode … but the last couple of bouts I just pulled it together.”

With a junior title in the books, many athletes would feel pressure to repeat gold in cadet, but Scruggs said any thoughts in that regard were minimal.

“A little bit. I was kind of was thinking, ‘oh, I got one. I’ll be satisfied with that,’ … Obviously I don’t want to lose a bout, but it wasn’t like, ‘oh I’m going to shamed’ or whatever,” she joked.

On Thursday, Scruggs will aim to join Zagunis as the only U.S. fencer to win all three gold medals – cadet, junior and junior team – at the same World Championships.

She will return to competition for the third day in a row as Team USA seeks to defend its 2018 Junior World title with all four fencers back in the lineup this year, including Scruggs and teammates Sylvie Binder (Armonk, N.Y.), Delphine DeVore (Westport, Conn.) and May Tieu (Belle Mead, N.J.)

“I think team is a great time for us to … bond as a team. I think it’s just something that we all really enjoy because it’s us working together and that feeling,” Scruggs said. “Personally, I really love team because that energy – I feed off of that energy, that cheering, so I’m excited.”

Rhodes, who went 4-1 in pools, shut out her first opponent, Melike Tasdelen (TUR), 15-0, in the table of 64. Rhodes fenced a close bout against Qianqian Huang (CHN) in the next round, building an 8-7 lead at the break and staying ahead for a 15-13 win. Fencing Samantha Catantan (PHI) in the table of 16, Rhodes led the bout, 5-3, after the first period and outscored Catantan, 10-6, in the second for a 15-9 win before her loss to Scruggs in the quarters.

Weintraub finished the pool rounds with a 4-2 record and defeated Michala Illekova (CZE), 15-7, in the 64. In the table of 32, Weintraub and Venissia Thepaut (FRA) felt each other out in the first period with the American scoring the only two touches in the first three minutes of the bout. Both athletes picked up the pace in the second as Weintraub went on a 6-2 run to take an 8-2 lead at the end of the period. Weintraub controlled the third as well for a 15-7 win. In the 16, Weintraub led her bout against Alina Poloziuk (UKR), 5-3, after the first period and closed at 15-9. Weintraub drew Hong, the eventual silver medalist, in the quarter-finals, but trailed 7-3 after the first break and 13-8 after the second before dropping the bout, 15-9.

Competition continues on Thursday with the men’s and women’s junior team foil events. Team rosters are as follows: