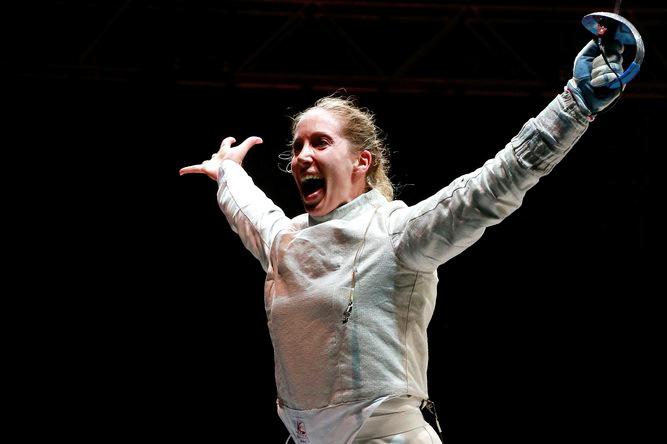 Zagunis, the most decorated athlete in the history of USA Fencing, earned the Division I National Championship on Friday in Salt Lake City, and has now won three straight golds on the North American Cup circuit after taking the NAC title in October.

The four-time Olympic medalist was perfect on the day, going 6-0 in pools and 5-0 in the direct elimination rounds.

In the semifinals, Zagunis bested 2012 National Champion Francesca Russo (Wayne, N.J.) by a score of 15-8. Up 10-7, Zagunis scored four straight touches and five of the next six to move into the final.

In a tight race for fourth position in the rankings, several athletes are in contention to qualify for the World Team, including Aleksandra Shelton (Tigard, Ore.) who bolstered her fourth place position in the National Team Point Standings with a top-16 finish in Salt Lake City. A 2018 Senior World Team member, Chloe Fox-Gitomer (Portland, Ore.), traveled from the Junior World Championships in Poland to Salt Lake to compete this weekend. After a top-eight finish in Salt Lake, the Princeton freshman sits fifth in the rankings. Monica Askamit (Matawan, N.J.), a Rio Olympic team medalist, is seeking to qualify for a fourth Senior World Championships, but currently holds the sixth-place position in the rankings.

Wheelchair National Championships also were on the line on Friday as Will Chase (Dacula, Ga.) and Shelby Jensen (Salt Lake City, Utah) claimed the men’s and women’s épée titles.

Competing in her hometown, Jensen won her first National Championship title and second gold on the NAC circuit as she took the top step of the podium at the October NAC.

Jensen qualified second out of pools at 6-2 and earned a bye into the semifinals. After edging out Vikki Espinosa (Portland, Ore.), 15-13, Jensen dominated the final against Ellen Geddes (Johnston, S.C.), who took seventh at the Kyoto Wheelchair World Cup, by a score of 15-2.

Chase went 11-1 in pools to take the No. 1 seed and a bye into the semis, where he continued to roll with a 15-5 victory over Volkers.

In the final, Chase overcame Russell by a score of 15-10.

Kocab went undefeated on the day with a 6-0 sweep in pools and a 4-0 record in the DEs.

After cruising past Carol Dannhauser (Fairfield, Conn.), 10-3, in the 16, Kocab reached the gold medal match with a 10-6 victory over Joanne Groening (Farmingdale, N.Y.) and a 10-7 win over Louise Leighton (Mishawaka, Ind.)

With a 10-6 victory over Michele Tayengco (Henderson, Nev.), Zafft secured a medal. That medal would be gold with 10-8 victories over Totemeier and Brisk.

In the final, Estrada fenced six-time individual Vet World medalist Diane Kallus (Round Rock, Texas) and came out on top, 10-8.

With a medal guaranteed, Zolinski bested both Chimienti and Quinlan, 10-7, for gold.

In the veteran 50-59 men’s foil competition, Frets Olivares (New York, N.Y.) broke though for gold after taking bronze at his last four NACs.

Lawrence, who won gold at this event in 2017, started the DE rounds with a 10-6 victory over Thomas Chambers (Lansdale, Pa.)

His next two bouts would come down to a single point as he edged out Matt Wilbert (Boxborough, Mass.), 6-5, and Philippe Bennett (New York N.Y.), 5-4.

After a 10-8 win over Kaihatsu in the semifinals, Lawrence came up with another clutch win, this one over six-time Vet World Team member Darricau, 7-6.

Competing in the +70 category for the second time, Hambarzumian won his first gold in the category and second NAC title overall.

Undefeated on the day with a 4-0 record in pools, Hambarzumian cruised past William Pegues (Reston, Va.), 10-4, and nearly earned the sweep over John Rea (Wilmington, N.C.), 10-1.

At his first NAC, Teo held Dan Berke (Kirkland, Wash.) to just two points before defeating Chen in the semifinals, 10-5.

In the final, Teo posted a 10-7 victory over Tang.

Four golds were also handed out in the Division II and Division III events.