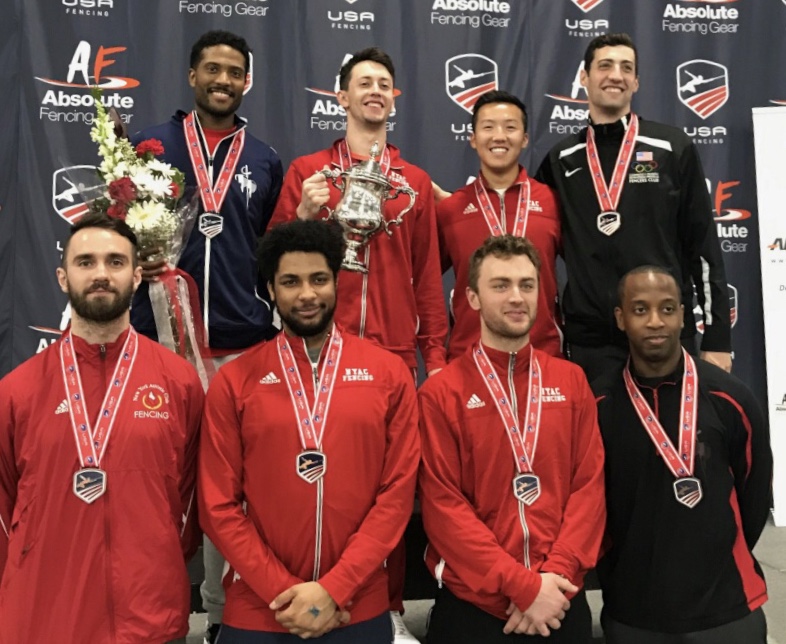 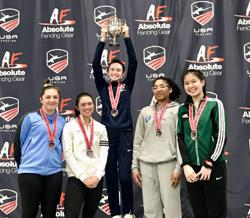 For 16-year-old Weintraub, who competed at her first Cadet World Championships in Torun, Poland just five days before, the gold marks her second straight podium finish at a national event and she becomes the youngest to win a Division I women’s foil championship since Margaret Lu (Greenwich, Conn.) won the first of her six titles in 2010.

Jumping out to a quick 7-0 run against Joshua Zhang (Old Brookville, N.Y.) in the semifinals, Hoyle advanced to the final, 15-5, where he faced 2017 World Team member Adam Rodney (New York, N.Y.)

In the Division I women’s foil event, Weintraub cruised past her first two opponents before besting Quinn Crum (Providence, R.I.) in the table of 16, 15-10.

In the semifinals against three-time Junior World team medalist Sylvie Binder (Armonk, N.Y.), Weintraub took a 5-3 lead into the first break, but Binder scored the first four points of the second period to take a 7-5 lead. Weintraub re-grouped and ended the bout on a 10-1 run for a 15-8 victory.

Isabelle Elizondo (Cypress, Texas) also claimed a place on the podium with bronze.

A National Championship also was awarded to NYAC gold in Division I Team women’s epee.

Still up one entering the final bout, Angen fenced Washington, who won the individual title on Sunday. Angen won the anchor leg over Washington, 5-4, to ensure the gold for NYAC.

Controlling her quarter-final against 11-time Vet World medalist Jane Eyre (Woolwich Twp, N.J.), 10-3, Deming advanced to the semis, where she overcame Enochs, 10-7, before cruising past Berman for gold.

Lee also went 5-0 in pools to secure the No. 1 seed in the direct elimination rounds. After a quick 15-4 victory in the 32, Lee guaranteed a medal with two 15-10 victories.

In the semis, she outtouched Samantha Renton (Rockville, Md.), 15-14, and bested Aya Taira (Lincolnshire, Ill.) in the final.

In the Division II men’s foil competition, Jorge Rojas (PUR) earned his second title of the weekend as he won Division III event on Sunday.

With two 15-8 victories against Jeanelle Christina Myers (Victorville, Calif.) and Gifford in the quarters and semis, Nguyen earned her best result at a NAC with a 15-12 victory over Reid.

In the Division III men’s epee competition, Boris Muga (San Antonio, Texas) made his first podium finish at a NAC a gold.

Muga then secured a place in the gold medal final with a 15-8 win over Simon Todreas (Belmont, Mass.) and took the title by edging out Brian Li (Tacoma, Wash.), 15-13.