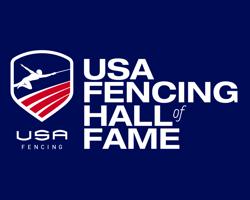 On Saturday, June 29, seven USA Fencing greats will be honored for their contributions to the sport as four Olympians and three coaches are inducted into the USA Fencing Hall of Fame.

Tickets are available online at http://bit.ly/19HOFTix for $35 per person and include heavy hors d’oeuvres and two complimentary drink tickets.

Hall of Fame inductees include: