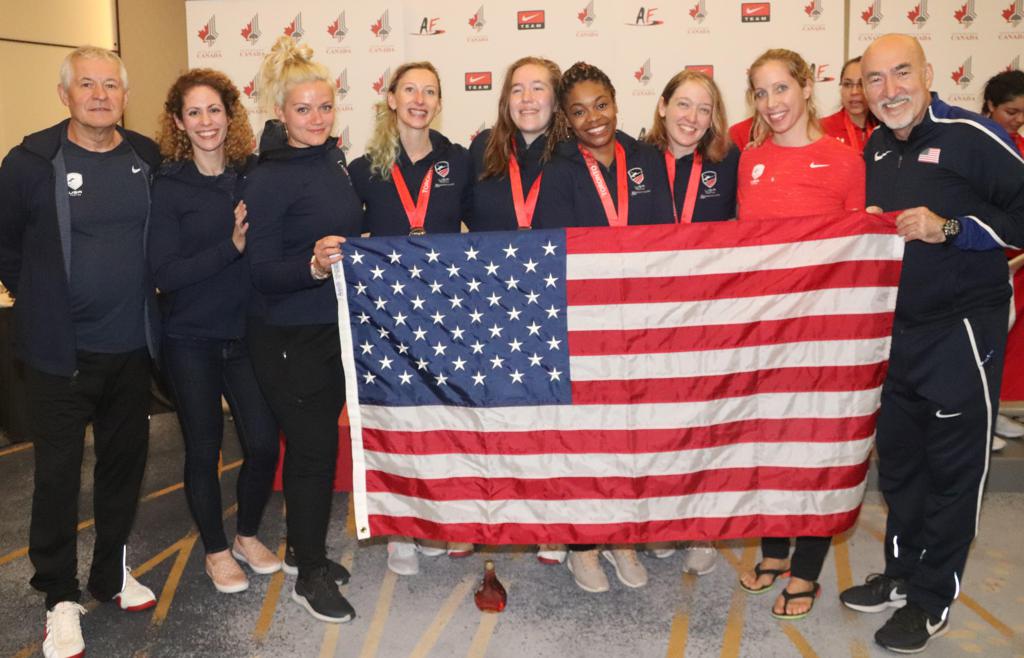 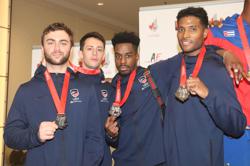 (Toronto, Canada) – The U.S. women’s saber team stood on the top step of the podium for the second straight year at the Pan American Championships while the men’s épée team earned silver on the final day of the competition in Toronto, Canada.

Team USA led the medal count with 15 podium finishes, including 10 of the 12 golds. Canada finished second with 10 medals.

For the women’s saber squad, the gold marks a strong start to Olympic qualification as the top four teams in the world by April 2020, and the next best team each zone, qualifies for the Games if that team is in the top 16 in the FIE World Rankings.

“[This gold is] incredibly important,” said Eliza Stone (Princeton, N.J.), who won her second title of the week after taking the title in the individual competition. “It’s the Olympic qualifying year and team gold means that we will qualify a team to the Olympic Games almost certainly, so it was incredibly important for us to bring our A game and the girls all came together, fought hard and we made it happen. I’m proud of them.”

In its first bout of the day, the United States won or tied eight of the nine bouts to defeat Argentina, 45-25. Shelton led Team USA with a +9 indicator.

“This is Ola Shelton’s first gold medal as part of Team USA and she fenced her heart out and got it for us,” Stone said. “I’m so proud of her and I know she’s over the moon about it.”

Team USA then saw its toughest match of the day in the semifinals against Mexico. Two years ago, Mexico won gold and this year it gave the United States an incredibly tough match, making Team USA come from behind.

Down 35-31 after seven, Shelton tied the bout at 39 against three-time Junior World medalist and two-time Junior Pan American Champion Natalia Botello, but Mexico took a narrow one-point lead at 40-39 into the final round.

Stone prevailed in the anchor bout over 2017 Pan Am silver medalist Julieta Toledo, 6-2, to clinch a place in the gold medal match with a 45-42 victory.

“We got in our own heads and Mexico fenced extremely well and we were down going into the second to the last bout,” Stone said. “Ola came in, had a great bout and set me up in the final. I basically didn’t watch any of it and I came in at the end with my blinders on and with everything in me, ready to get every single touch I possibly could and fight as hard as I could, whatever happened. One touch at a time, I made it happen. Thank God,” Stone said with a laugh. “It’s all experience for the Olympic Games and I’m happy to have been there.”

In the final, Team USA gained momentum as the match went on. After splitting the first four bouts with Canada to take a two-point lead, 20-18, the United States won the remaining five bouts for a 45-34 victory. Stone led the squad with a +8 indicator.

“We were just becoming confident in our own moves, controlling our emotions more,” Stone said. “The four of us are still getting to know each other as a team and we came together real strong. We clearly learned that we are all there for one another. Every single one of us was supporting each other perfectly and the emotions got under control and we fought our hardest, did our actions and brought home the medal.”

The men’s épée team entered as the reigning champions.

In the quarter-finals, Jake Hoyle (New York, N.Y.), James Kaull (New York, N.Y.), Curtis McDowald (Jamaica, N.Y.) and Adam Rodney (New Orleans, La.) bested Chile, 45-26. Coming from behind, Team USA faced a 14-9 deficit in the fourth before Rodney closed the gap to two by the end of the fourth. McDowald, who tallied a +14 indicator on the match, won the fifth, 11-4, to give Team USA a 25-20 lead and the United States won the final four bouts to win.

“Chile actually gave us a harder time than we thought [it would], but none of us flinched for a second,” McDowald said. “We knew what we had to do. We knew what our strengths were and we knew one of them would crack. It just so happened that I was the fencer on the strip for that to happen.”

Fencing Canada in the semifinals, Team USA won six out of the first seven bouts to go up, 34-19. Canada made a final push, taking the final two bouts, but the United States held on, 45-39, for a chance to defend its title.

The final pitted the United States against Cuba, which earned Pan Am silver in 2016 and won the title in 2014.

While Team USA edged out Cuba earlier in the year, 45-43, the United States fell behind early in Toronto and never recovered. Down by as many as seven points, McDowald brought the team back within one after six at 23-22, but Cuba won the next two bouts to go up seven again, 35-28. McDowald started his run in the final bout, cutting the lead down to four at 38-34, but Canada held on for the 45-34 victory.

“Once we were down, that was going to be our best option was to break their anchor,” McDowald said. “It was close. It was a critical mistake at the end and it’s just tough to make a comeback in épée. With the double touch and three minutes, it’s a little tough, but I definitely thought I had it.”

Although Team USA was aiming for gold, the silver still marks a good start to Olympic qualification, especially as Venezuela, who is likely the U.S.’ biggest competitor, lost in the quarter-finals.

“This is great for us,” said McDowald of the silver. “Even though we didn’t win, we’re in a better position for the Olympic qualification now than we were actually last year … It’s a good start for us going into the qualification.”