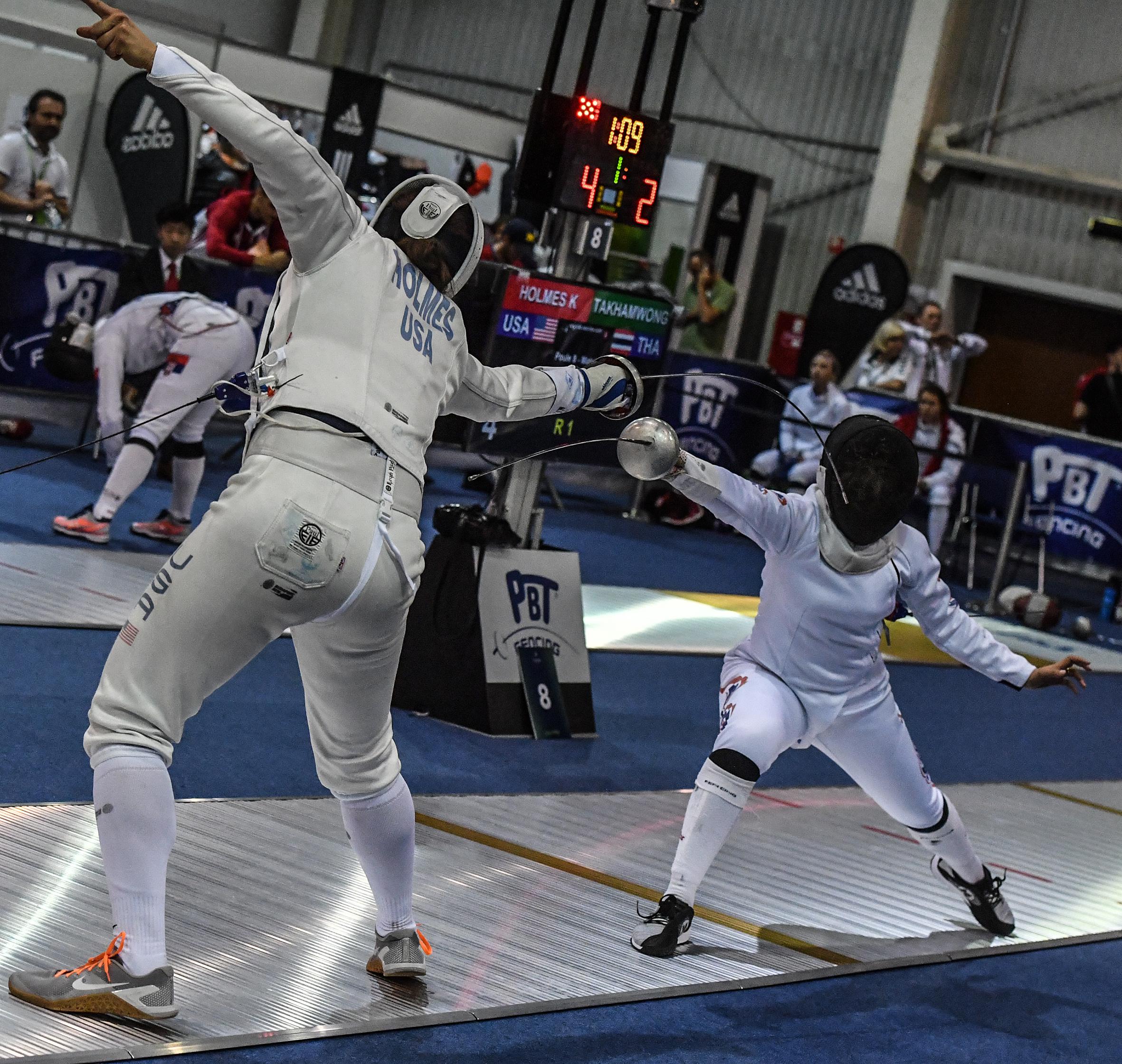 Kat Holmes (left) went 6-0 in pools to advance to the table of 64 in Budapest. Photo Credit: #BizziTeam

(Budapest, Hungary) – Team USA will have the maximum of four men’s saber fencers and three women’s epeeists competing in the table of 64 at the Senior World Championships on Thursday after the conclusion of the first day of preliminary rounds in Budapest.

In the women’s epee event, Rio Olympian Kat Holmes (Washington, D.C.) celebrated her 26th birthday on Monday with six straight pool bout wins to advance from pools to the table of 64 on Thursday.

Holmes will join her teammates from the squad that won the team event at the 2018 Senior Worlds, Courtney and Kelley Hurley (San Antonio, Texas) who are ranked No. 7 and 11 in the world, respectively, and did not have to fence the preliminary rounds as the top 16 seeds are exempt from pools.

Holmes won her first three pool bouts and then found herself tied at one after three minutes against Nozomi Sato (JPN). With 16 seconds remaining in the sudden death minute, Holmes attacked and picked up a single on her opponent – a move she became known for in 2018 when she secured three overtime wins for the U.S. Women’s Epee Team en route to its first Senior World Championship title win.

“I remember all the other overtime matches that I’ve had as of late and also my senior year thesis I wrote at Princeton where I was like ‘Attacking is more successful than defending’” Holmes said as she reflected on using her undergraduate research to analyze fencing. “I did this whole computational model thing where I wrote about what you should do in overtime and I was like ‘I know I should fleche, I know I should fleche.’ I saw the moment, did it and I was like ‘Ah! Success for fencing and science!’’

Holmes won her next two bouts and ended the round in eighth place with the top 16 advancing to the table of 64 on Thursday where she will fence 2010 Cadet World bronze medalist Amalia Tataran (ROU). The winner will take on either Young Mi Kang (KOR), a 2018 Senior World team silver medalist and individual World No. 7, or Kabita Devi (IND) in the 32.

“I’ll have a couple days to watch video, do analysis, formulate a more detailed plan,” Holmes said. “But it’s all about remembering who I am and [then I’ll] make them fence my game, make them come to me, take them out of their comfort zone and just be really confident in who I am.”

Although the Senior Worlds are one of the most significant point qualifiers for the 2020 Tokyo Olympic Games, Holmes said going back to the basics always applies.

“At the end of the day, it’s still fencing. What I did 16 years ago, 17 years ago, when I started fencing, it’s still the same basic concepts, so trying to not have that myopic view and be like ‘Oh, it’s all about the Olympic Games,’’ she said. “Just really focusing on touch by touch, action by action, how I’m feeling being in the moment and being present and not looking forward to a year from now.”

In the table of 64, Courtney Hurley will face Yana Botvinik (ISR). After two podium finishes in the last three events on the World Cup circuit, the 2018 Senior World bronze medalist is aiming for a repeat, but a potential matchup against 2018 World Champion Mara Navarria (ITA) stands between Hurley and the podium. The two have only fenced individually once with Hurley winning, 15-14, en route to a bronze medal finish at the Chengdu World Cup in March. Also watch out for Hurley to run into 2010 Senior World bronze medalist Natalie Moellhausen (BRA) in the 16. Although Courtney has only fenced Moellhausen in competition once in the last eight years, she has watched older sister Kelley defeat the Brazilian three times in the six months.

For her part, Kelley Hurley will fence Barbara Rutz (POL) in the 64 after defeating Rutz in March at the Budapest Grand Prix. Watch for the winner to take on 2012 Olympic Champion Yana Shemyakina (UKR) or Hyein Lee (KOR). Hurley has yet to defeat the Ukrainian, but kept their last bout close at the Cali Grand Prix in May, falling by two touches at 15-13.

Kasia Nixon (Los Angeles, Calif.) also fenced in the women’s epee event on Monday, but did not advance to the second day. Nixon went 3-3 in pools and moved on to the preliminary tables where Niki-Katerina Sidiropoulou-Christodoulou (GRE) held a 7-4 lead in the third period before 2017 Junior World silver medalist Nixon pushed three straight singles to send the bout to overtime. After a double, her opponent took the winning touch to end the bout at 8-7.

In the men’s event, Thompson and Spear will advance to the 64 with teammates Eli Dershwitz (Sherborn, Mass.) and Daryl Homer (Bronx, N.Y.) who were exempt from pools due to their No. 1 and 14 world rankings, respectively.

Thompson went 4-1 in a short pool to advance to the table of 64 where he quickly built an 8-3 lead over Inaki Bravo (ESP) at the break. Closing out at 14-4, Thompson gave up three before ending with a 15-7 victory.

“I was a little nervous. It’s a little difficult to close a bout, especially when you’re winning by a score like that, but I was able to get back into it and close 15-7,” Thompson said. “I shouldn’t have given up so many touches, but it’s ok.”

While the 2019 Senior World Team features seven newcomers, Thompson is the only U.S. fencer in the individual event who has never competed at either a Junior or Senior World Championships and remains new on the World Cup circuit. The 2017 Junior Pan American Champion has caught up quickly, though, earning four top-64s on the circuit as well as a 32 during the eight tournaments this season. Competing at his first Senior Pan Ams last month, Thompson was stopped only by Homer who won their bout in the quarters.

“I’ve been only traveling for a year and a half and there’s been a lot happening in that year and a half, but it feels great to travel with some of the veterans on the circuit,” Thompson said. “Eli is No. 1 in the world. Daryl’s an Olympic medalist. Jeff is a well-seasoned veteran and it’s pretty good to be with those guys,” Thompson said. “There’s a good, tight-knit group between us these past few months and I just hope we all do well and that we do well in the team event.”

When he returns to competition on Thursday, Thompson will fence three-time individual Senior World medalist Tiberiu Dolniceanu (ROU) in the 64 in a rematch of their bout at the Seoul Grand Prix in April where the Romanian edged Thompson, 15-13.

“I’m really looking forward to it. The last time we fenced, I lost to him, 15-13, in Korea and hopefully this time will be a different bout,” Thompson said.

Khalil is one of two Thompsons in Budapest as his older sister, Kamali, is making her World Team debut in the women’s saber team competition and could be heard cheering her brother on for every bout.

“Having my sister here is probably one of the best things ever. Just knowing that my sister’s always been in my corner – whether she’s away at another tournament or I’m at home or she’s at home and now us being here cheering for each other is going to be helping me a lot more than I can be helping her,” Khalil said.

Spear finished the pool rounds at 4-2, but still earned a bye into the preliminary table of 64 where the London Olympian took an 8-4 lead at the break before defeating Ahmed Ferjani (TUN), 15-8.

“I’m happy I made it work. It was a little bit close in the beginning, but I was able to get my rhythm and figure out what I was doing and finish strong,” Spear said. “I had a couple of good bouts, a couple of not so good bouts, but I made it through and I’m ready to fence on Thursday.”

Spear will draw 2013 Senior World Champion Veniamin Reshetnikov (RUS) in the 64. Although Spear has never defeated the Russian, the two also haven’t fenced since 2015 and Spear has posted close scores against some of the world’s best on the circuit this season.

Spear also is in a quadrant with reigning World silver medalist Dershwitz whose opener is a 64 bout against Yu Yong Choy (SGP) meaning that the soonest the Americans could meet up is in the eight. Dershwitz’s bracket also includes a potential matchup in the 16 with former Olympic and World Champion Aldo Montano (ITA). Although Montano is now 40 years old, he won silver at the Padua World Cup this season and came into the Senior Worlds seeded 16th. Dershwitz and Montano fenced twice in the 2017-18 season with Dershwitz scoring both wins. In addition to Spear and Reshetnikov, Dershwitz could run into Junho Kim (KOR), the World No. 7 who Dershwitz held off for a 15-14 win in the semis at the 2018 Senior Worlds. In their last matchup, Kim defeated Dershwitz, 15-10, in the quarters of the Barcelona World Cup in May and a rematch is guaranteed to be fast action and intense on both sides. Watch out for Andras Szatmari (HUN), the 2017 Senior World Champion who will be competing at home and could take out Kim in the quarters.

Homer, the 2016 Olympic and 2015 Senior World silver medalist will open with a table of 64 bout against Hansol Ha (KOR), the gold medalist at the Algiers World Cup in November. Homer will be looking to avenge a loss earlier this season in the table of 32 to potential opponent Ali Pakdaman (IRI) who bested Homer, 15-13, at the Moscow Grand Prix in May. Homer also could find himself in a rematch of the 2016 Olympic final against Aron Szilagyi (HUN) who defeated Homer to win his second straight Olympic gold. Although the two have fenced six times in the direct elimination rounds throughout their careers, they have not faced off since Rio and Szilagyi will have both the blessing and curse of being the hometown favorite to contend with.