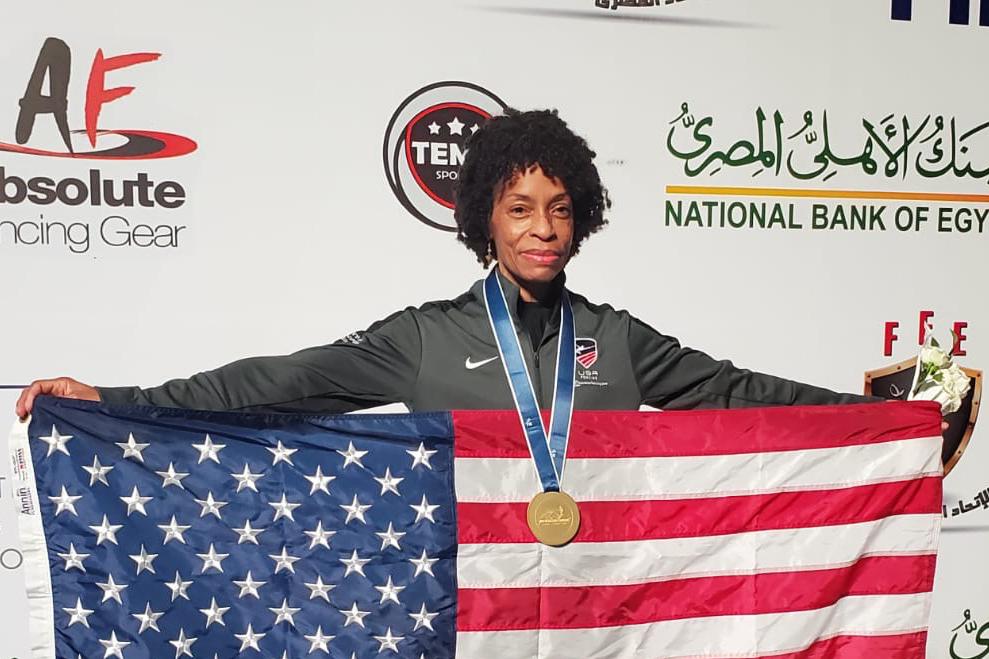 The medal was one of two for Team USA on the day as the men’s saber team brought home bronze, its fifth podium finish in the last six years.

Starks-Faulkner went 5-0 in the direct elimination rounds, giving up no more than six points to any single opponent.

With a 10-4 victory over Akiko Tanaka (JPN), Starks-Faulkner advanced to the semifinals, where she overcame three-time medalist in the 50-59 event Gianna Cirillo (ITA), by a score of 10-5.

Starks Faulkner’s podium finish marks the fifth time in the last six years that a U.S. fencer has claimed a medal in the event.

Competing at her first Vet Worlds, Elizabeth Merritt (Billerica, Mass.) posted a 10-8 win over 2010 bronze medalist Tatiana Zhdanova (RUS), 10-8, in the 32, but lost by the same score the following round to two-time team medalist Caron Hale (GBR).

In the semifinals, Team USA built a 20-18 lead with two bouts remaining. Germany took the lead after the fifth round, and down 29-27, Brown came back to tie the score at 29. However, he couldn’t complete the comeback and the Americans lost by a point, 30-29.

The bronze medal final featured a rematch of a pool bout with Team USA taking on Japan. Although the United States lost by one in pools, it jumped out to a 15-5 lead halfway through the match. Japan cut the gap to three at the end of the fourth, but Team USA won the final two bouts for a 30-21 victory. Runyan tallied a +9 indicator for the United States.

With the two medals, Team USA how now amassed 12 medals in the first three days of competition, including four golds, which leads the medal count.