Gerek Meinhardt Wins Silver, Climbs to World No. 3 at Olympic Qualifier in Bonn 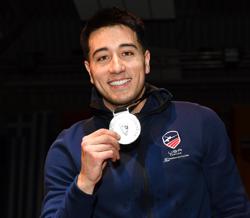 (Colorado Springs, Colo.) – Three months after the U.S. Men’s Foil Team won its first ever Senior World Championships title in history, the members of that squad were back in action on Saturday, fighting for points towards individual qualification for the 2020 Tokyo Olympic Games.

The team’s veteran, three-time Olympian Gerek Meinhardt (San Francisco, Calif.), would lead the way for the Americans in the individual event at the Bonn World Cup in Germany, winning his 12th individual career medal on the circuit with a silver and moving up to No. 3 in the world rankings behind 2018 Senior World Champion Alessio Foconi (ITA) and former World No. 1 Race Imboden (Brooklyn, N.Y.)

“I couldn’t be happier to have started the new World Cup season with a podium finish in Bonn. This is going to be a long, competitive season, and it was rewarding to see the work I put in this offseason pay off early. There’s plenty of good and bad to take away from the day, so hopefully I can continue to improve as the season progresses,” said Meinhardt who defeated both Olympic and World Champions en route to his silver medal.

The podium finished moved Meinhardt from fifth to third in terms of USA Fencing Olympic qualifying points, trailing behind his teammates Nick Itkin (Los Angeles, Calif.), a 2018 Junior World Champion seeking to qualify for his first Olympic Games, and Alexander (Massialas (San Francisco, Calif.) who won individual silver and team bronze in Rio. The other two members of the Rio squad, Imboden and Miles Chamley-Watson (New York City, N.Y.), are fourth and fifth in qualifying points. The U.S. Men’s Foil Olympic Team will be announced on April 19 at the conclusion of the USA Fencing Division I National Championships in St. Louis with the top three athletes in the USA Fencing National Team Point standings qualifying for both the individual and team events and the fourth athlete qualifying as a replacement athlete for the team event only.

Seeded fifth in the tournament, Meinhardt was exempt from the pool and preliminary rounds on Friday and bested Daniel Giacon (FRA), 15-5, in the table of 64.

Meinhardt would go on to defeat three of Italy’s best fencers in the upcoming rounds to advance to the finals.

Although 2015 European medalist Edoardo Luperi led their table of 16 bout, 7-4, after the first break, Meinhardt scored the first five touches of the second period and went on to close the bout at 15-11.

To guarantee himself a medal, Meinhardt would need a win against 2016 Olympic Champion Danielle Garozzo in the quarter-finals. While the two have fenced countless times in team events, this would be their first individual bout since 2013.

Leading by just one touch at 6-5 in the first minute, Meinhardt went on a tear, scoring seven unanswered touches to bring the score to 13-5 76 seconds into the bout. Although Garozzo scored four touches late in bout, Meinhardt ended with a 15-9 win in the first period.

“Garozzo is an incredible fencer, and I wanted to make sure that I came out of the gates with a high level of intensity. After going back and forth for the first several touches, I thankfully was able to gain some momentum and string together a run that gave me a solid lead,” Meinhardt said. “He was able to put together a run of his own, but I maintained my composure and focus to close it out.”

For Meinhardt and Foconi, this would be their third bout in 2019 alone with the Italian winning the first two in the finals of the Paris World Cup in January and the quarters of the Shanghai Grand Prix in May. Both athletes held the score close with Foconi keeping a 9-7 lead after the first period and Meinhardt tying the score at 11 in the second. Although Foconi took the next touch, Meinhardt ended with four straight and a 15-12 win.

“I lost a couple close bouts to Foconi last season and definitely went into the match hoping to avoid some of the recurring mistakes I had previously made. We went back and forth, with Alessio scoring some great touches,” Meinhardt said. “Thankfully, I was able to limit my mistakes and stay sharp at the end of the bout to pull ahead and come out on top.”

In the finals, Meinhardt fenced Julien Mertine (FRA) – a three-time Senior World team medalist who defeated Massialas, 15-11, in the 32 and bested a pair of Olympic Champions in the medal rounds, defeating Benjamin Kleibrink (GER), 15-3, and Andrea Cassara (ITA), 15-10, to make the finals.

Mertine kept the pace lightning fast, building a 7-3 lead against Meinhardt in the first 45 seconds. While the American scored three touches to cut Mertine’s lead to 7-6, the Frenchman earned his second title of the year, ending the match, 15-9.

Seeded seventh in the table of 64, Massialas defeated Junyoung Park (KOR) in the opening round before his 15-11 loss to Mertine who pulled away from a tie at eight to defeat Massialas, 15-11, in the 32.

Itkin entered the tournament as the reigning bronze medalist after earning his first career senior medal in Bonn in 2018. After a 15-12 win over three-time Junior World medalist Mengkai Huang (CHN) in the 64, Itkin fenced 2016 Junior World bronze medalist Kyosuke Matsuyama (JPN) in the 32. Matsuyama led the bout, 5-2, after the first and 7-4 after the second, but Itkin scored two clutch touches in the final 16 seconds of the third to tie the bout at 10 and force an overtime period. Matsuyama attacked quickly, however, scoring the winning touch after nine seconds.

Moelis was one of two members of the U.S. squad to qualify for the 64 through the pools and preliminary rounds on Friday, finishing 5-1 in pools and earning two direct elimination round wins to making the second day, defeating Jeremy Fafa Keryhuel (CIV), 15-10, and Vladislav Zhuravlev (RUS), 15-8.

In the 64, Moelis edged 2019 Junior World silver medalist Vladislav Zhuravlev (RUS), 15-13, to set up a table of 32 bout against Garozzo. Although Moelis took an 8-4 lead in the first period, the Olympic Champion tied the bout at nine and scored six of the next seven touches to close at 15-10.

Moelis’ finish allowed him to climb to No. 6 in Olympic qualifying points.

Imboden and 2017 Junior World Team Champion Geoffrey Tourette (Cupertino, Calif.) each finished in the table of 64.

Tourette, who is now No. 7 in Olympic points, went 4-2 in pools and won his preliminary DE bouts both by 15-9 scores over Justus Olbrich (GER) and Michal Siess (POL) to make the 64 where he fell to 2018 Senior World silver medalist Richard Kruse (GBR), 15-9.