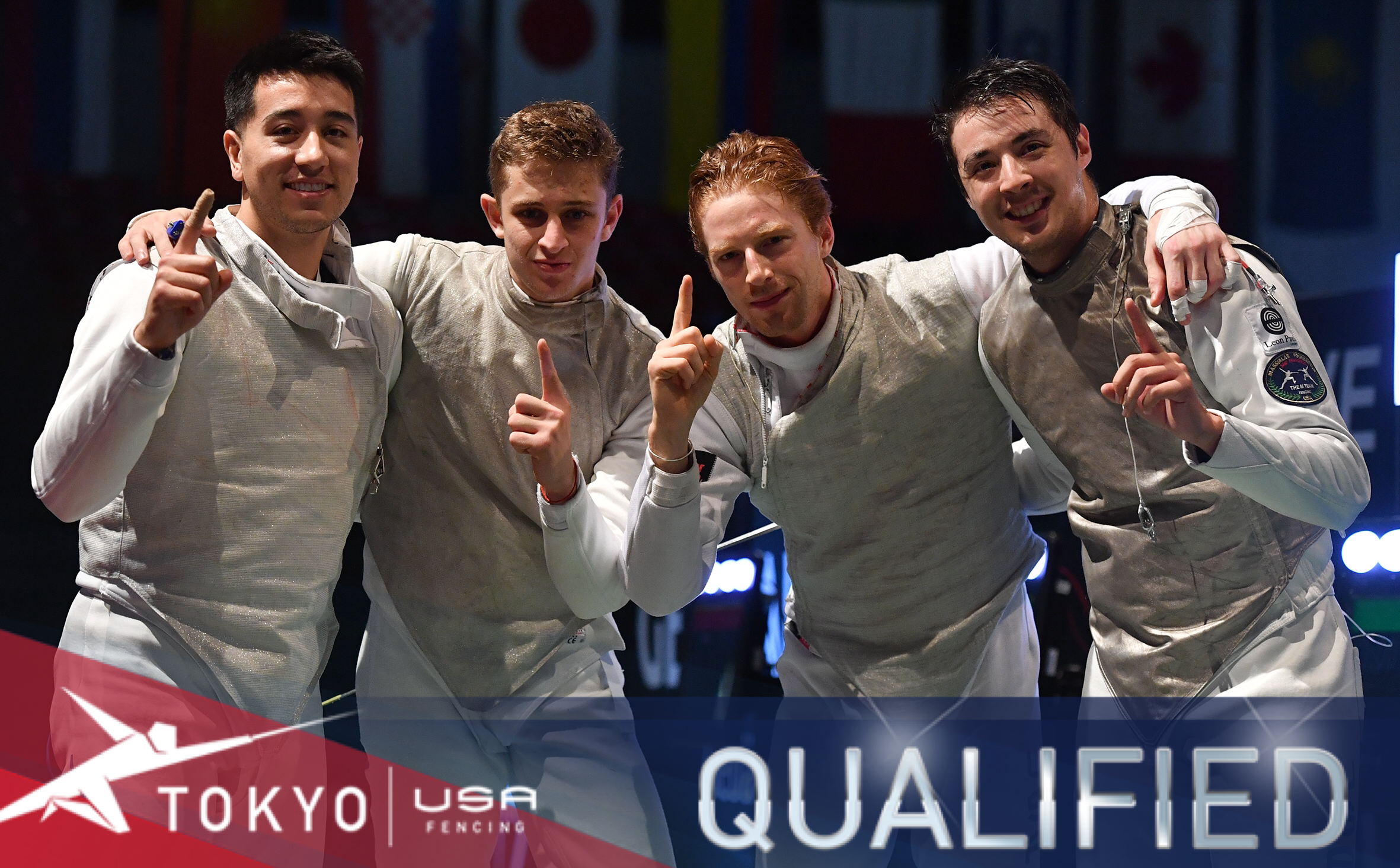 (Colorado Springs, Colo.) – The U.S. Men’s Foil Team earned the first quota for the 2020 Olympic Games for any fencing team in any weapon on Sunday following a fourth straight gold medal finish during the qualification period.

Team USA won gold at the Bonn World Cup in Germany, sweeping the first four titles in the qualification series that included its first ever Senior World Championship title in July as well as gold medals at the Pan American Championships in July and the St. Petersburg World Cup in May.

Ranked No. 1 in the world and No. 1 in the Olympic Qualification Standings with three tournaments remaining in the selection period which ends on April 4, the U.S. team has accumulated enough points that it cannot be passed by any other team in the America’s Zone. After becoming the first men’s foil team in history to sweep all five World Cups in 2017-18, the U.S. squad is aiming to enter the 2020 Olympic Games as the No. 1 seed and earn the first Olympic gold medal for a USA Fencing team in any weapon.

If the U.S. team remains ranked among the top four teams in the Olympic Qualification Standings at the end of the qualification period and an additional team from the American Zone finishes in the top 16, the zone will be represented by two nations in the field of eight or nine teams in Tokyo. Currently, Canada and Brazil are ranked No. 13 and 15, respectively.

Team USA’s lineup in Bonn featured three of the athletes who won gold at the Senior Worlds in July and bronze in Rio in 2016: Alexander Massialas (San Francisco, Calif.), Gerek Meinhardt (San Francisco, Calif.) and Race Imboden (Brooklyn, N.Y.) Former Junior World Champion Nick Itkin (Los Angeles, Calif.) made his second career appearance in the team event after placing in the top 32 in the individual event at his first Senior Worlds this summer.

After a bye into the table of 16, Team USA opened with a 45-28 win over Denmark. Imboden led the squad with a +10 indicator with Massialas earning +6 and Itkin posting +1.

In the quarter-finals against Germany, the Americans dropped just one bout with Imboden, Massialas and Itkin each going +2 in key victories against five-time Senior World Champion Peter Joppich. Itkin also outscored 2008 Olympic Champion Benjamin Kleibrink, 5-3, in the fifth with Massialas splitting touches against Kleibrink at 5-5 in the anchor bout to close with a 45-30 win.

The semifinals would create a rematch of the World Championship semi between Team USA and Russia – the 2016 Olympic Champions. Eager to avenge its loss over the summer, Russia slowly built a 30-28 lead by the end of the sixth bout. In the seventh, both teams put in their youngest fencers with Itkin taking on 2019 Junior World Champion Kirill Borodachev. Itkin made up the two-touch deficit, tying the bout at 33 with two touches in the final minute to change the momentum of the bout. Imboden took the strip in the setup bout against 2016 Olympic bronze medalist Timur Safin and got to work quickly, outscoring Safin, 6-2, at the start of the bout before ending with a 40-37 lead. In the final bout between Massialas and 2014 Senior World Champion Alexey Cheremisinov, Massialas took a 44-41 lead and gave up just one more touch before clinching the win at 45-42.

The finals put Team USA against Korea – a team that entered the tournament as the sixth seed, but upset No. 2 Italy in the semifinals, 45-37, and is aiming to qualify for the Olympic Games with a team in men’s foil for the first time since 2004. In recent years, however, the Koreans have become a force on the foil scene, placing fourth at the 2018 Senior Worlds in the team event with Jun Heo and Young Ki Son winning individual bronzes in 2018 and 2019, respectively.

The Americans won four of the first six bouts as Korea fought to stay in the match, trailing by just five after the sixth bout at 30-25. In the final rotation, however, the Americans turned up the heat and refused to be caught. Itkin scored five straight against Son to end the seventh at 35-26 and Imboden gave up just two against Heo to give Team USA a 40-28 lead after the eighth. Massialas anchored against Kwanghyun Lee, finishing the match with a decisive victory at 45-31.

Overall, Imboden (+22), Massialas (+16) and Itkin (+11) each posted outstanding indicators on the day with Meinhardt serving as the team reserve after winning a silver medal and fencing six individual bouts on Saturday.

With the Olympic quota secured, eyes turn now towards the race for qualification for each of the four spots on the team. After the conclusion of the individual event in Bonn, Itkin, Massialas, Meinhardt and Imboden are ranked No. 1-4 in Olympic qualification points with two-time Senior World Champion and Rio Olympic bronze medalist Miles Chamley-Watson (New York City, N.Y.) in fifth. The U.S. Men’s Foil Olympic Team will be announced on April 19 at the conclusion of the USA Fencing Division I National Championships in St. Louis with the top three athletes in the USA Fencing National Team Point standings qualifying for both the individual and team events and the fourth athlete qualifying as a replacement athlete for the team event only.

The Road to Tokyo resumes in December when the men’s foil fencers will compete in back-to-back weekends with points on the line at the December North American Cup in Salt Lake City (Dec. 6-9) and at the Tokyo World Cup (Dec. 13-15) which will serve as the Olympic test event for fencing.