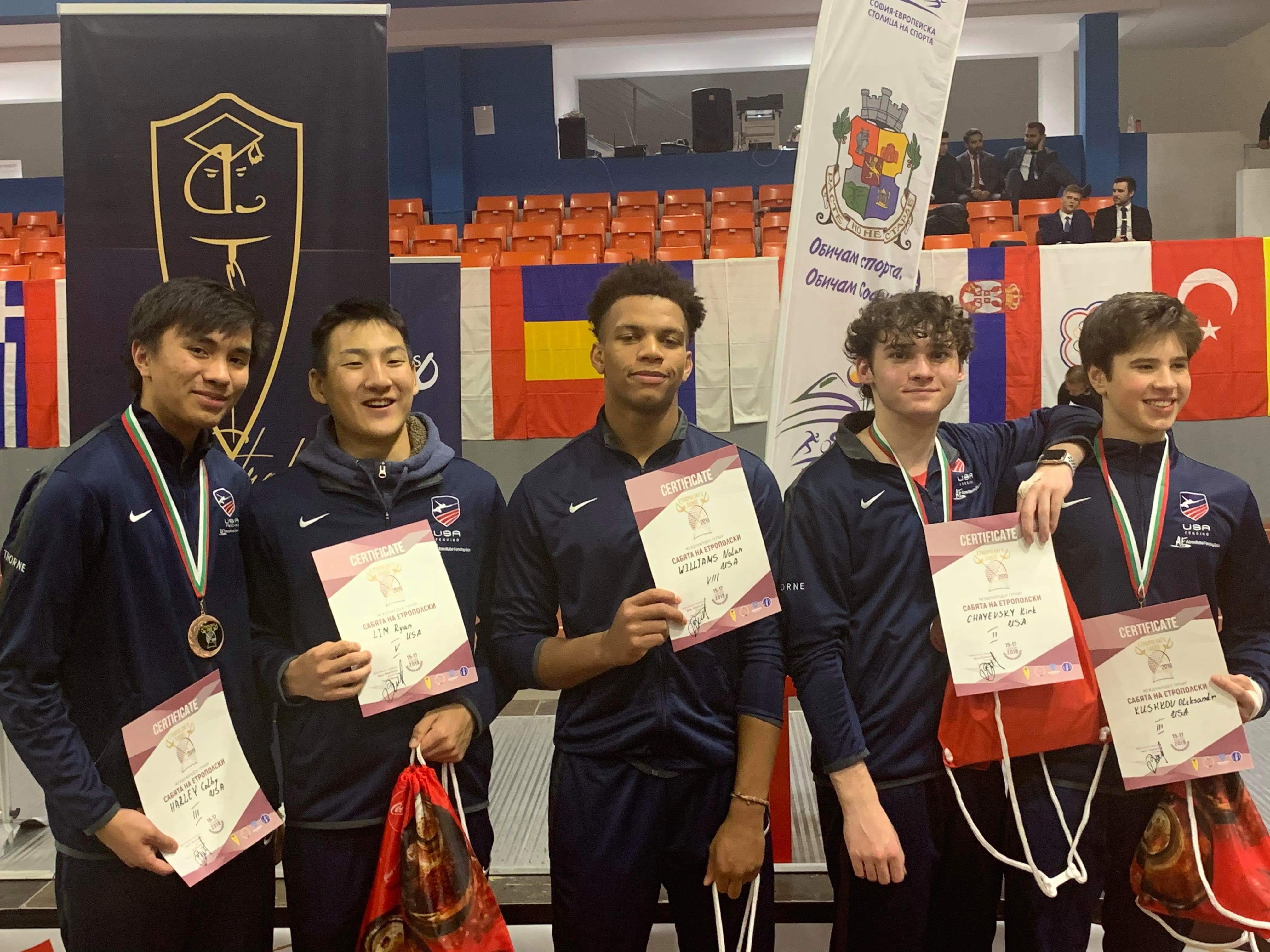 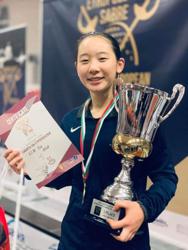 (Colorado Springs, Colo.) – Team USA’s red, white and blue was plentiful on the podium at the Sofia Cadet European Cup as the United States won seven medals across the four events.

With her first international medal, Kim was perfect on the day, going 6-0 in pools and 7-0 in the direct elimination rounds.

Kim earned a bye to the table of 128 as the No. 3 seed out of pools and the 2018 Y14 National Champion picked up two quick 15-4 victories over 2019 Cadet World Team member Kristina Milanova (BUL) and Veda Anna Wladimir (HUN).

Kim advanced to the table of 16 with a 15-6 win over teammate Chelsea Delsoin (Jersey City, N.J.), making nine members of Team USA in the table of 16.

With the top step of the podium, Kim currently ranks No. 3 in the European Cadet Fencing Rankings and No. 2 in the newly released USA Fencing Cadet Women’s Saber Team Point Standings.

After a 15-12 victory over three-time Cadet World Team member Ilinca Pantis (ROU), 15-12, and a 15-9 win against Maria Kuznetsova (RUS), Guthikonda clinched a medal with a 15-12 effort over Konstantina Kefala (GRE).

The United States started the day with a dominant 45-15 victory over Slovenia / Austria before reaching the medal rounds with two wins over squads from Turkey’s No. 4 and No. 2 teams at 45-30 and 45-31, respectively.

The semifinals set up a match-up with USA 2, which was represented by Sullivan, Delsoin, Madison Four-Garcia (North Bergen, N.J.) and Erica Wu (Marietta, Ga.)

USA 2 also ended on a high note, rebounding from the semifinal loss to win bronze over control the bronze medal match against Turkey 1, 45-23.

In the men’s individual competition, Team USA nearly swept the podium and had seven fencers in the top 16.

En route to the silver, Chayevsky came up with several clutch performances, including three 15-14 victories.

The semifinals saw Chayevsky earn his third 15-14 victory of the day as he overcame Harley, but he came up short in the final with a 15-9 loss to Todor Stoychev (BUL).

Harley, who won bronze at his first Cadet European Cup in Godollo earlier this season, won his second international medal with bronze.

The 2019 July Challenge Champion in the cadet event, Harley cruised through his first two bouts, posting a 15-5 victory over Oleksandr Hryhoruk (UKR) and a 15-6 win against Ethan Hilton (GBR).

With a 15-11 victory over Muhammed Furkan Kalender (TUR), Harley reached the table of 16, where he outtouched teammate Jaden Callahan (Carlsbad, Calif.), 15-14.

A 15-8 victory over teammate Nolan Williams (Watchung, N.J.) earned Harley his second Cadet European Cup medal before falling to Kirk by a one-touch margin at 15-14.

On the other side of the bracket, Kushkov also claimed his second career Cadet European Cup medal after taking bronze in Bucharest last season.

He then easily won his next two bouts, cruising past Nikita Kisin (RUS), 15-9, and Radu Nitu (ROU), 15-6, to secure a medal and put three members of Team USA on the podium.

Although Kushkov fell to Stoychev, 15-3, in the semis, he currently ranks No. 5 in the European Cadet Fencing Rankings.

In the first set of USA Fencing Men’s Saber Cadet Team Point Standings, Harley leads at No. 1 while Kushkov and Chayevsky rank second and fourth, respectively.

Team USA advanced to the quarters with a dominant 45-14 victory over Iceland and a 45-33 victory over Hungary 2.

A tough loss to Russia 3, 45-43, in the quarter-finals placed the United States in the 5th-8th place table, but the Americans finished on a high note, taking two victories.