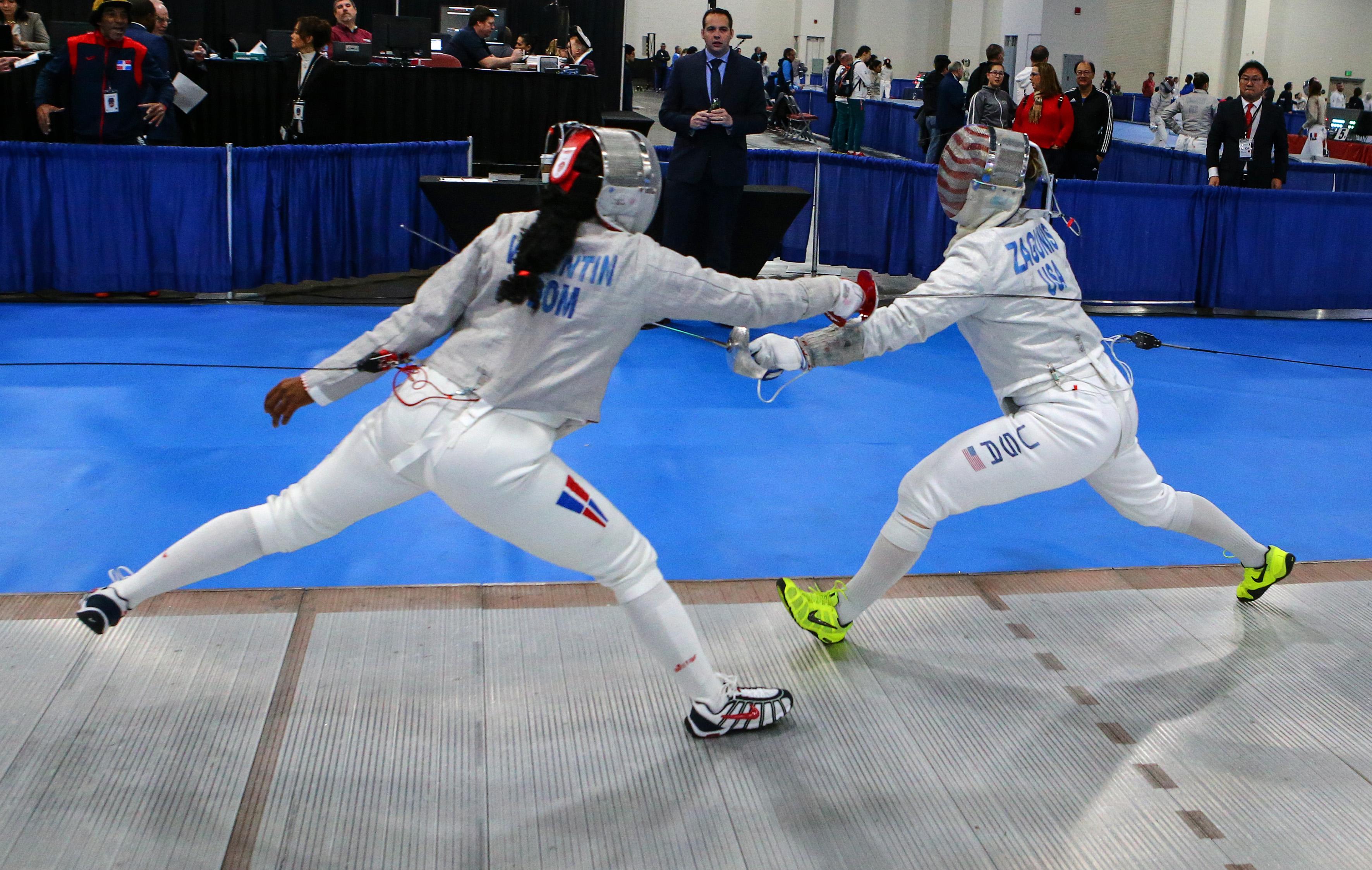 (Salt Lake City, Utah) – Team USA will have six fencers competing in the table of 64 on Saturday at the Absolute Fencing Gear Women’s Sabre World Cup in Salt Lake City.

Eliza Stone (Chicago, Ill.) was exempt from pools due to her top-16 ranking.

With Olympic qualification points on the line, Zagunis, a two-time Olympic Champion, went 6-0 in pools with a +20 indicator to move directly into the table of 64.

“I’m feeling great. I can’t explain how much it makes a difference to be on a home field advantage,” Zagunis said. “I feel refreshed. We had the [December North American Cup] less than a week ago, so I had to take care to make sure I was recovered from that so that I was feeling fresh going into this competition, but I felt good today.”

Chamberlain started her day 3-2 in pools before using a strong finish to best 2017 Pan American Championship bronze medalist Marissa Ponich (CAN), 15-8, in the PT128. To reach Day 2, Chamberlain came from behind to outtouch Sevil Bunyatova (AZE), 15-14, in the PT64.

“In the pool bouts, I started off strong. I won my first pool bout, 5-1, and then I think I was too excited, so I lost the next two bouts. I had a short pool and I brought myself back again to win the last two,” Chamberlain said. “I think I was a little bit shaken from pools, so I had a rough start to my first DE. It was 7-7 in my first bout and then I managed to regain my composure to win. Then I came from behind for my second DE. I just needed to listen to my coach because I was getting too nervous and I just need to have confidence in my actions. I figured out the pattern at the end of the bout.”

“[Funke] actually came to our club last year and stayed with us for six weeks, so I had a good idea of what she was going to do,” Berke said. “My coach and I talked it over and we started out with a really good plan and the fencing fell into place from there. I’m happy with how I fenced my DE bouts.”

Both Tartakovsky and Singleton-Comfort had a tough start, going 2-4 in pools, but recovered to make Day 2.

Tartakovsky and Criscio fenced for the first time last month at the Orleans World Cup, where Crisicio took the victory, 15-11. However, on home turf in Salt Lake City, Tartakovsky dominated the bout, taking a 15-6 victory.

“I did well in pools [in Orleans] and she didn’t, and [when we fenced], I got scared because Criscio used to be in the top 16 in the world,” said the two-time Junior World team bronze medalist. “I was rushing a lot and I wasn’t fencing like myself, and so I thought a lot about that bout because it was the first World cup. I learned and I came back and I wanted to see how well I was able to make the change. What did I learn from last time and how can I improve the result this time? And this time I was able to beat her.”

“There’s good support from the team,” said Singleton-Comfort of fencing in a World Cup held in the United States. “We have a lot of USA fencers, so it feels good. I heard, ‘Go Leanne, go USA!’ It was really awesome to have such a big crowd in your corner.”