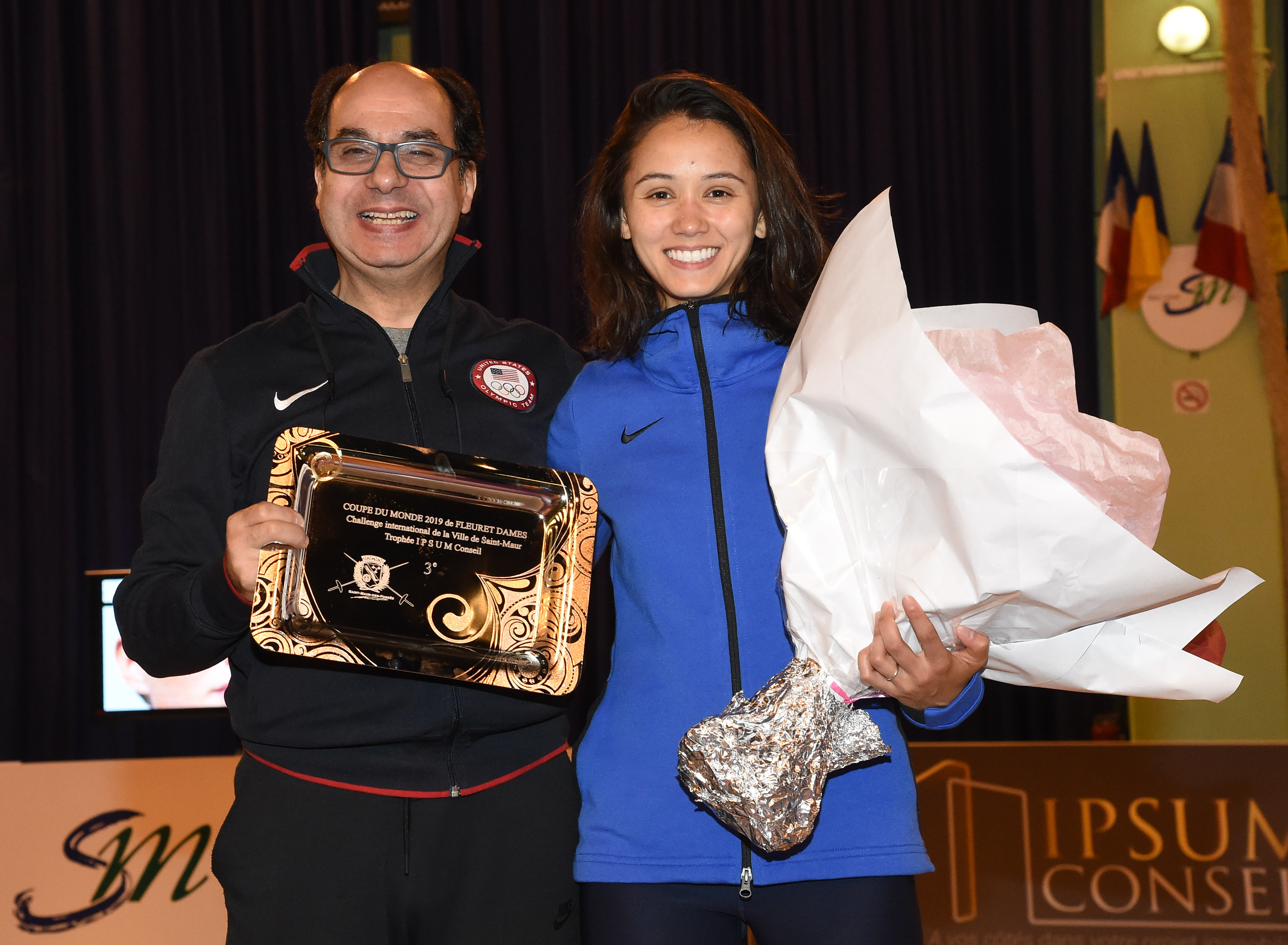 Five years later, Kiefer earned her 18th World Cup circuit medal in St. Maur on Sunday with a bronze – her third podium finish in the city outside of Paris.

The win is Kiefer’s first medal of the season as the four-time Senior World medalist aims to qualify for her third straight Olympic Games.

Exempt from pools on Friday, Kiefer fenced two-time Junior World medalist Yiting Fu (CHN) in the 64. Fu led the bout, 4-3, after the first period and built a 9-5 lead in the second before Kiefer went on a 6-2 run to end the period with a tie at 11. Kiefer’s control continued in the third period with four straight touches in just over 30 seconds to take the win, 15-11.

In the table of 32, Kiefer scored five straight touches against Fanny Kreiss (HUN) late in the first period and entered the second with an 11-6 lead. In the second, Kiefer closed the bout at 15-9.

Kiefer came up against Jackie Dubrovich (Riverdale, N.J.) – her teammate on the squad that won bronze at the 2019 Senior Worlds – in the table of 16.

A four-time Junior World medalist, Dubrovich is seeking to qualify for her first Olympic Team and earned medals at the first two domestic qualifiers of the season after losses to Kiefer in the semifinals at the October North American Cup and the finals of the December NAC. The two have fenced in each of the first four tournaments of the season with Kiefer also claiming a win over her teammate in the table of 64 at the Cairo World Cup last month.

On Friday, Dubrovich finished the pool rounds undefeated at 6-0 to advance directly to the table of 64. She went on to earn her first top 16 of the season after direct elimination round wins against Morgane Patru (FRA) and Adelya Abdrakhmanova (RUS) by 15-12 and 15-13 scores, respectively.

Dubrovich’s 13th place finish allowed her to move up to No. 2 in the newly released USA Fencing National Team Point Standings. The top three women’s foil fencers in the standings at the conclusion of the 2020 USA Fencing Division I National Championships will earn nominations to the 2020 U.S. Olympic Fencing Team in both the individual and team events with the fourth athlete qualifying as a replacement athlete for the team event only.

Kiefer’s quarter-final would be a rematch of the 2019 Senior World quarters against 2012 Olympic silver medalist Arianna Errigo (ITA). While the two-time individual Senior World Champion defeated Kiefer, 15-9, in July, Kiefer kept the bout close from the start and pulled away from a tie at seven in the final minute of the first period to take a 12-8 lead going into the second. Kiefer closed strong, splitting touches with the Italian at 3-3 to end with a 15-11 win. Kiefer now holds a 3-1 record against Errigo during their individual bouts since the 2016 Olympic Games.

In the semifinals, Kiefer fenced 2018 Senior World Champion Alice Volpi (ITA) and pulled away from a two touch deficit with just over a minute in the first period, scoring six straight touches to take a 13-9 lead. Volpi answered with seven touches of her own to pull away to 14-13 as the clock closed out the period. In the second, Volpi scored first to take the bout, 15-13 and go on to win gold.

At the conclusion of the tournament, Volpi and Kiefer each retained their world rankings at No. 2 and No. 5 in the world, respectively with three-time individual Senior World Champion Inna Deriglazova (RUS) remaining No. 1 after a bronze medal finish in St. Maur.

With seven U.S. fencers advancing to the second day in St. Maur, the World Cup also had an impact on several athletes aiming to qualify for the 2020 Tokyo Olympic Games.

Sabrina Massialas (San Francisco, Calif.), a 2016 Junior World Champion, has struggled with injuries during the last two seasons and was forced to withdraw during the individual event at the 2018 Senior Worlds. Now the younger sister of two-time Olympic medalist Alexander Massialas (San Francisco, Calif.) has graduated from Notre Dame and her tie for 13th earned Massialas her first top-16 at a World Cup since 2016.

Massialas finished 6-0 in pools, tying with Dubrovich for a +18 indicator on the first day of competition. In the direct elimination rounds, she blew through both of her Italian opponents in the first two rounds, defeating both Elisa Vardaro and Valentina De Costanzo by 15-6 scores.

In the 16, Massialas ended the first period against 2014 Senior World silver Martina Batini (ITA) down by one at 9-8, but tied the score at 11 in the second. Massialas pulled up to 13-12 before the two-time Senior World Team Champion pulled away with a 15-13 win. Batini went on to take silver after a 15-14 win over Deriglazova in the semifinals.

The result follows a top-32 finish in Cairo for Massialas who moves up to No. 5 in the National Team Point Standings. Kiefer has nearly secured a berth on her third straight Olympic Team with a 4,000+ point gap between her No. 1 position in the standings and Dubrovich at No. 2. London Olympian Nicole Ross (New York City, N.Y.) is in third, although an injury at the December NAC forced her to withdraw from the St. Maur World Cup. There remains just 32 points between Massialas and fourth-ranked Iman Blow (Brooklyn, N.Y.) – a four-time Junior World medalist who lost to 2019 Cadet World Team member Maia Weintraub (Philadelphia, Pa.), 15-13, in the preliminary table of 128.

Seventeen-year-old Weintraub earned her first top-32 result on the Senior World Cup circuit during the Olympic qualifying season after a top-64 result in Cairo.

Weintraub went 3-3 in pools and defeated Martyna Dlugosz (POL), 15-7, before her win over Blow to make the second day.

Weintraub now holds the No. 11 position in the National Team Point Standings, but also moved up iin the junior rankings where she is the No. 2 American behind 2019 Junior World Champion Lauren Scruggs (Ozone Park, N.Y.) who did not advance to the second day, but remains No. 7 in the Senior Team Point Standings.

After a top-32 finish in Cairo, Tieu is now ranked sixth in the Senior Team Point Standings and the third-ranked American in the junior standings.

Zeiss earned her third top-64 result in the Olympic qualifying period, rebounding from a 2-4 pool finish to defeat 2018 Cadet World bronze medalist Delphine Devore (Westport, Conn.), 15-14, and Maria Teresa Diaz (ESP), 15-13, in the preliminary tables. Zeiss moved into the 64 as the No. 62 seed, drawing Errigo and ending with a 15-4 loss.

Zeiss and Deschner now hold the No. 12 and 28 positions in the Senior National Team Point Standings, respectively.

On Sunday, Kiefer, Dubrovich, Blow and Tieu fenced in the team event, finishing sixth to hold on to the No. 4 spot in the Olympic Qualification Standings. The top four teams in the standings at the end of the qualification period in March will earn positions in Tokyo, followed by the top team in each zone, as long as that team is ranked among the top 16. Pan Am zone rival Canada is sixth in the standings after a 13th place finish in St. Maur.

After a bye into the table of 16, Kiefer, Dubrovich and Blow won or tied eight of the nine bouts against Spain to take the match, 45-25. All three athletes earned positive indicators with Dubrovich ending at +9, followed by Kiefer at +7 and Blow at +4.

In the quarter-finals against Japan, Team USA held a 10-4 lead after the first two bouts, but Japan won or tied the next six to finish the eighth bout with a 40-27 lead. Kiefer closed against 2016 Junior World silver medalist Sera Azuma, putting up six touches before Japan took the match, 45-33.

In a rematch of the bronze medal final from the 2019 Senior Worlds, Team USA fenced France for fifth.

Although France returned its starting lineup from Worlds, the tournament’s No. 3 seed fell to No. 11 Hungary, 45-38. Kiefer defeated 2019 Senior World individual silver medalist Pauline Ranvier, 5-1, in the opening bout, but France won or tied the next five to take a 30-20 lead after the sixth. Fencing her first match of the day in place of an injured Dubrovich, Tieu defeated three-time Senior World team medalist Anita Blaze, 5-2, in the seventh, but Ranvier and Thibus outscored Blow and Kiefer for a combined 13-8 to end with a 45-33 win.