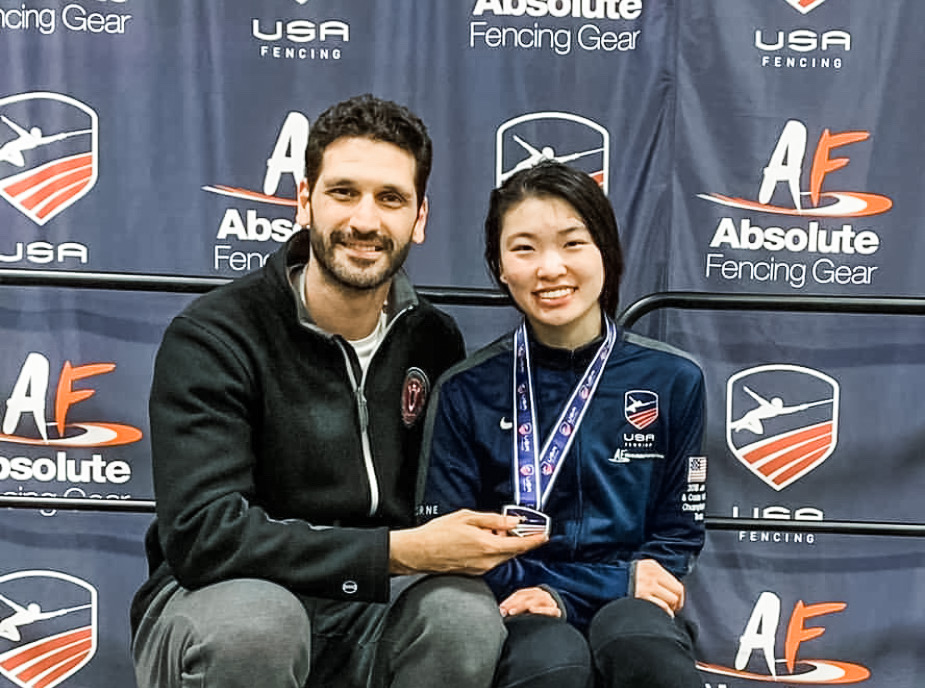 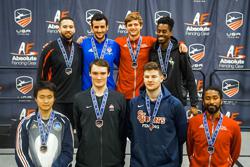 A two-time gold medalist in the junior NAC events, 18-year-old Tieu earned her first Division I title in the third of four domestic Olympic qualifying tournaments. With the win, Tieu moves into the sixth position in the USA Fencing National Team Point Standings.

In the epee and foil events, the top three athletes in the each of the standings at the conclusion of the USA Fencing Division I National Championships on April 19 in St. Louis will qualify for nomination to the 2020 U.S. Olympic Fencing Team with the top three athletes qualifying for both individual and team events and the fourth athlete earning a position as the replacement athlete for the team event only.

In the next two rounds, Tieu defeated Ryanne Leslie (Philadelphia, Pa.) and 2018 Cadet World bronze medalist Delphine DeVore (Westport, Conn.) each by 15-7 scores to make the eight in a Division I event for the second time this season.

Despite the loss for the 2016 Junior World Champion, Massialas moved up to from No. 5 to No. 4 in the race for a position on the 2020 U.S. Olympic Team with a 15-13 win over four-time Junior World medalist Iman Blow (Brooklyn, N.Y.) who currently sits fifth in the USA Fencing National Team Point Standings.

In the bronze medal final, Tieu came out strong against 2019 Junior and Cadet World Champion Lauren Scruggs (Ozone Park, N.Y.) with a 6-1 lead at the end of the first period. Scruggs came within two of Tieu at 9-7 in the second, but Tieu closed out the period, 15-10, to win the bout and advance to the finals.

Although Rhodes produced a comeback win against 2019 NCAA Champion Sylvie Binder (Armonk, N.Y.) at 15-13 in the semis, Tieu controlled their final from the start, ending the first period, 7-2, and closing out at 15-6.

At the conclusion of the NAC, the top three positions in the USA Fencing National Team Point Standings remain unchanged. Three of the four fencers who won bronze at the 2019 Senior Worlds hold the top three positions in the standings due to results at the first two NACs of the season and international finishes with Lee Kiefer (Lexington, Ky.), Jackie Dubrovich (Riverdale, N.J.) and Nicole Ross (New York City, N.Y.) in the 1-2-3 positions. Massialas and Blow switched for fourth and fifth, respectively, with Tieu and Scruggs in sixth and seventh.

Thirty-four-year-old Bratton has represented the United States at seven Senior World Championships between 2007 and 2012, earning gold with Team USA at the 2012 Senior World Team Championships and silver in 2010. The United States has not competed in the team event in men’s epee on the Olympic stage, however, since 2004 and 2020 will mark the first time Team USA is expected to send four fencers to the Games in men’s epee in 16 years.

The pressure would be on in Charlotte for Bratton who entered the event ranked 13th in the nation and needed a solid result to return to the top 12 in order to compete in the remaining international Olympic qualifiers after being waitlisted for the Heidenheim World Cup in Germany next weekend.

Bratton went 5-1 in pools and held off both of his first two opponents in the direct elimination rounds by 15-13 scores, edging Miles Weiss (Houston, Texas) and his 2017 Senior World teammate Cooper Schumacher (Forest Hills, N.Y.) to make the 16 where he outscored Maciek Zmyslowski (Des Plaines, Ill.), 15-12.

Bratton earned a quick win over Henry Lange (Beaverton, Ore.), but would be challenged by 16-year-old Ethan Kushnerik (Brooklyn, N.Y.) in the semis. Bratton took an 8-7 lead after the first break, but Kushnerik tied the score at 12 before Bratton took two singles and a double to win the bout, 15-13.

Bratton led the bout, 8-7, at the break, but Fayez pulled away from a tie at 11 with three straight singles before doubling to take the win, 15-12.

In the parafencing women’s epee competition, two Paralympic hopefuls faced off in the finals with 21-year-old Victoria Isaacson (Poughkeepsie, N.Y.) winning her first parafencing epee title at a NAC.

Seeded first out of pools, Isaacson fenced Donna Fisk (Morganton, N.C.) in the semifinals with 66-year-old Fisk competing at her first NAC. Isaacson controlled the bout to earn a 15-1 victory.

In the finals, Isaacson fenced four-time Wheelchair World Team member Ellen Geddes (Johnston, S.C.) for the third time of the day with each athlete taking a 5-3 win over the other in the double pool rounds. Geddes led the bout, 6-2, early in the first, but Isaacson came back to tie the score at six at the end of the period and take a 10-9 lead at the end of the second. With Isaacson looking to close in the third, Geddes came back to score five straight and earn a 14-13 lead in the final minute. With 17 seconds remaining in the bout, however, Isaacson scored a clutch single to send the final to sudden death overtime. In the priority minute, it would be Isaacson who would score the winning touch to end the bout, 15-14, with 13 seconds on the clock.

The parafencing men’s epee final featured a rematch of the October NAC final between Will Chase (Dacula, Ga.) and former Wheelchair World Champion Tareq Alqallaf (KUW) who advanced to the final after a 15-2 win over Stephen Carrier (Church Point, La.) in the semis.

In the finals, Alqallaf ran away from a tie with Chase at five, scoring six straight singles to take an 11-5 lead. Alqallaf gave up just two more singles in the bout as he took a 15-10 win after placing second behind Chase in October.

Ranked fourth going into the tournament, SFFC Red dominated the day with none of its first three opponents coming closer than 12 touches as SFFC Red bested the Renaissance Men (45-23), DTS (45-31) and MFC A Team (44-32).

SFFC Red Team controlled the match, winning or tying eight of the nine bouts with Gassner anchoring the team to a 45-25 victory.

SFFC White won six of the first eight bouts to take a 40-30 lead going into the final between Borowiak and Hodges. Although Hodges made an impressive run at a comeback with 11 touches, Borowiak held off the upset to finish with a 45-41 win.