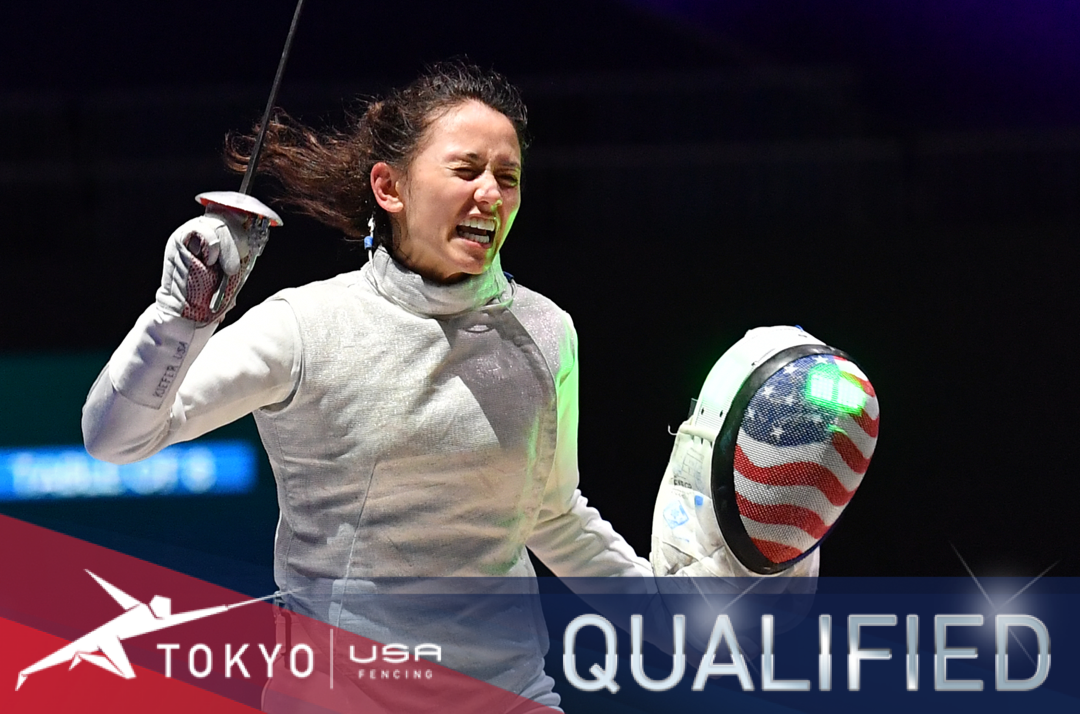 Kiefer, who was just 18 at her first Olympic Games in London, is aiming to become Team USA’s first women’s foil fencer to win an individual Olympic medal. In the team event, Kiefer led the Americans to medals at the last three Senior World Championships, including gold in 2018.

A four-time NCAA Champion for Notre Dame, Kiefer completed her first two years of medical school at the University of Kentucky before taking the 2019-20 school year off to train full time for Tokyo. Kiefer and her 2012 and 2016 Olympic teammate, Gerek Meinhardt (San Francisco, Calif.) married on Sept. 1 in what was dubbed the Royal Fencing Wedding. Meinhardt is ranked No. 3 in the nation in his bid for a fourth Olympic Games. With two individual and four Senior World team medals on his resume, Meinhardt also is a top podium hopeful, giving the couple the potential to reach the podium together at their final Games.

Although the U.S. Olympic Fencing Team will not be formally announced until April, Kiefer locked her position on the team due to her results throughout the course of the qualification season that began in May of 2019. The top three women’s foil fencers in the USA Fencing National Team Point Standings at the conclusion of the 2020 USA Fencing National Championships in St. Louis on April 19 will earn nominations to the 2020 U.S. Olympic Team to compete in both the individual and team events with the fourth qualifying as the replacement athlete for the team event only.

During a qualifying period that has included six international tournaments and three domestic events, Kiefer advanced to the quarter-finals in five of the six international events, winning bronze at the Shanghai Grand Prix, St. Maur World Cup and the Katowice World Cup as well as earning top-eight finishes at the 2019 Senior Worlds and Cairo World Cup. Kiefer also won gold medals in both of her appearances on the North American Cup circuit, taking the titles in both October and December.

In Katowice, Kiefer entered the competition as the No. 6 fencer in the world and opened the direct elimination rounds with a 12-0 lead in the table of 64 against 2019 Junior World Champion Lauren Scruggs (Ozone Park, N.Y.) before closing out the bout, 15-5.

Kiefer continued her dominance in the next two rounds, besting Seo In Hong (KOR) and Maria Marino (ESP) each by 15-8 scores.

In the quarter-finals, Kiefer earned her greatest win of the day, besting two-time Olympic medalist Arianna Errigo (ITA) for the second time in the last two tournaments. The bout would not be without it’s nail-biting moments, however, with Errigo making up a four-touch deficit to tie the bout at 11. Kiefer closed the first period at 14-12 and gave up just one more touch in the second to win the bout, 15-13.

Kiefer fenced 2016 Olympic Champion Inna Deriglazova (RUS) in the semifinals, ending the second period with a tied score at nine before falling, 15-13, to the reigning Senior World Champion who went on to win gold in Katowice.

The podium finish allows Kiefer to move up to No. 5 in the world.

The results in Katowice also impacted the qualification dreams of several of Kiefer’s teammates with seven U.S athletes all earning Olympic qualifying points.

Binder finished the pool rounds on Saturday with a 6-0 result to earn the top position in the pool rankings and a 17th seed in the table of 64.

In her opening direct elimination bout, Binder defeated Valentina de Costanzo (ITA), 15-10, and went on to upset 2019 Senior World silver medalist Pauline Ranvier (FRA) in the table of 32, taking an 11-4 lead in the second before closing the bout at 15-13 with four seconds remaining in the final period.

Binder held her table of 16  bout against 2013 Junior World champion Camilla Mancini (ITA) at a tie at five after the first period before Mancini pulled away at 13-8 in the second and closed with a 15-9 win in the third. Mancini would go on to defeat 2018 Senior World silver medalist Ysaora Thibus (FRA) in the semis and end the day with a silver medal.

Binder’s finish moved the 20-year-old up to No. 7 in the USA Fencing National Team Point Standings with three international events remaining to crack the top four.

In addition to Scruggs, four members of Team USA were eliminated in the table of 64.

Two of Kiefer’s teammates on the squad that won bronze at the 2019 Senior World Championships earned top-64 points in Katowice.

Jackie Dubrovich (Riverdale, N.J.) advanced through the pools and preliminary tables on Friday, but fell to Mancini, 15-10, in the 64. Dubrovich remains No. 2 in the National Team Point Standings in her bid to qualify for her first Olympic Team.

Nicole Ross (New York City, N.Y.), earned a bye into the 64 as the No. 15 fencer in the world, but dropped her first bout to Anna Poltz (HUN), 15-10. With the finish, Ross remains in the top 16 and holds on to her No. 3 position in the National Team Point Standings.

Four-time Junior World medalist Iman Blow (Brooklyn, N.Y.) went 6-0 in pools, but lost to Marino, 15-13, in the 64. Blow’s wins on Friday were key, however, as they allowed the 2018 NCAA Champion to move into the No. 4 position in the National Team Point Standings, passing 2016 Junior World Champion Sabrina Massialas (San Francisco, Calif.) who defeated Blow at the January NAC in Charlotte last week.

Scruggs, who fell to Kiefer in the 64, remains No. 6 in the standings. The 16-year-old who is aiming to defend her 2019 Cadet and Junior World titles this year, has the potential to become the youngest athlete ever to qualify for a U.S. Olympic Fencing Team.

Zander Rhodes (South Orange, N.J.), a member of the 2019 Cadet World Team and candidate for the 2020 Cadet and Junior World Teams, qualified for the 64 at a senior event for the first time in the Olympic qualification period and is now 10th in the National Team Point Standings after a 15-13 loss in the 64 to 2019 Pan American Championships silver medalist Jessica Guo (CAN).