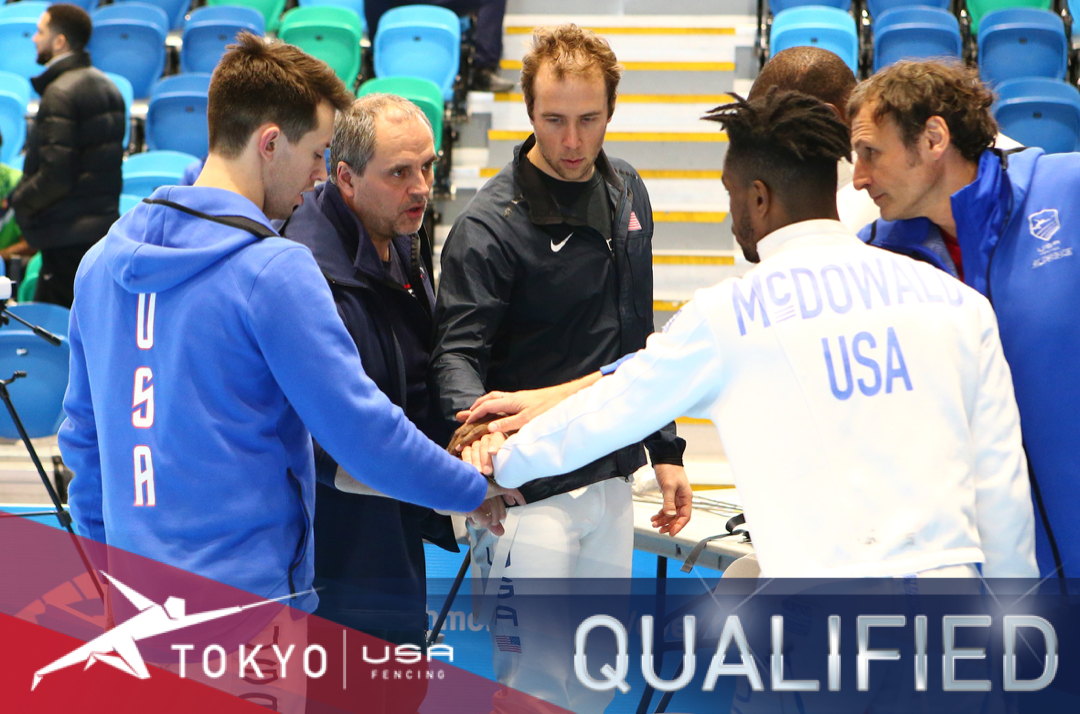 (Colorado Springs, Colo.) – Team USA will field a men’s epee team at the Olympic Games for the first time since 2004 – a result that became final at the Vancouver World Cup on Sunday when the U.S. Men’s Epee Team placed seventh in Canada.

Team USA finished 3-2 on the day to earn its first top-eight World Cup result of the Olympic qualifying season and guarantee a position at the Games with the Americas zonal allocation. The U.S. squad finished ahead of Venezuela, who earned the qualification for the zone in 2016, at each of the first six Olympic qualifying events, including a silver medal at the 2019 Pan American Championships.

France, the reigning World and Olympic Champions, and Italy, the 2016 Olympic silver medalists, also have guaranteed their slots in Tokyo with one Olympic qualifier for teams remaining.

With a berth to the Tokyo Games guaranteed, the race is on for which fencers will fill the positions on Team USA. Two individual international qualifiers remain before the U.S. team is selected at the conclusion of the Division I National Championships, April 16-19 in St. Louis. The top three men’s epee fencers in the USA Fencing Senior National Team Point Standings at the conclusion of the Division I Nationals will qualify for Team USA in both the individual and team events with the No. 4 fencer in the standings serving as a replacement athlete for the team event only.

At the conclusion of the individual events in Vancouver, the top three positions in the standings are being held by three former Senior World Team members who are each looking to compete at the Olympic Games for the first time: Jake Hoyle (New York City, N.Y.), Curtis McDowald (Jamaica, N.Y.) and Yeisser Ramirez (Brooklyn, N.Y.) Soren Thompson (New York City, N.Y.), a 2004 and 2012 Olympian, is fourth in the standings.

Hoyle, McDowald, Ramirez and Thompson each represented Team USA in the team event in Vancouver with McDowald serving as the squad’s anchor for all six matches.

After a 45-40 win over the Czech Republic in the table of 32, the Americans took on Hungary – the 2016 Olympic bronze medalists who are fighting Russia in a points race for the European zone position in Tokyo. McDowald, Ramirez and Hoyle built a 29-26 lead during the first eight bouts and McDowald clinched  a berth in the quarter-finals, winning a 16-15 spring to the finish against Daniel Berta in the anchor leg for a 45-41 victory.

All four U.S. fencers competed against top-seeded France who built a 40-34 lead after the first eight bouts. McDowald outscored Daniel Jerent, 7-5, but couldn’t make up the gap as the French team went on to take the win, 45-41.

In the 5th – 8th place table, the Americans fenced Ukraine, the 2019 Senior World medalists. Down by seven after the seventh, Hoyle put up a big win against Roman Svichkar in the eighth, besting the 2018 Senior World individual bronze medalist by a 6-3 margin to cut Ukraine’s lead to 38-34. In a rematch of their individual quarter-final at the 2018 Senior Worlds, McDowald took on Bogdan Nikishin, outscoring his opponent, 6-3, but Ukraine held on for the win, 41-40.

The match for seventh place against Spain would come down to the wire as well. This time, however, the Americans came away victorious with McDowald scoring the winning touch against Yulen Pereira for a 40-39 overtime win.

In the individual competition, Hoyle and Alen Hadzic (New York City, N.Y.) each advanced from the preliminary rounds on Friday to the pool rounds on Saturday.

Hadzic also finished 4-2 in the pool rounds and defeated Valerio Cuomo (ITA), 15-10, and Yuval Freilich (ISR), 15-14, to qualify for the table of 64 where he lost to five-time Senior World team medalist Max Heinzer, 15-8. With his top-64 result, Hadzic moves up to No. 7 in the National Team Point Standings.