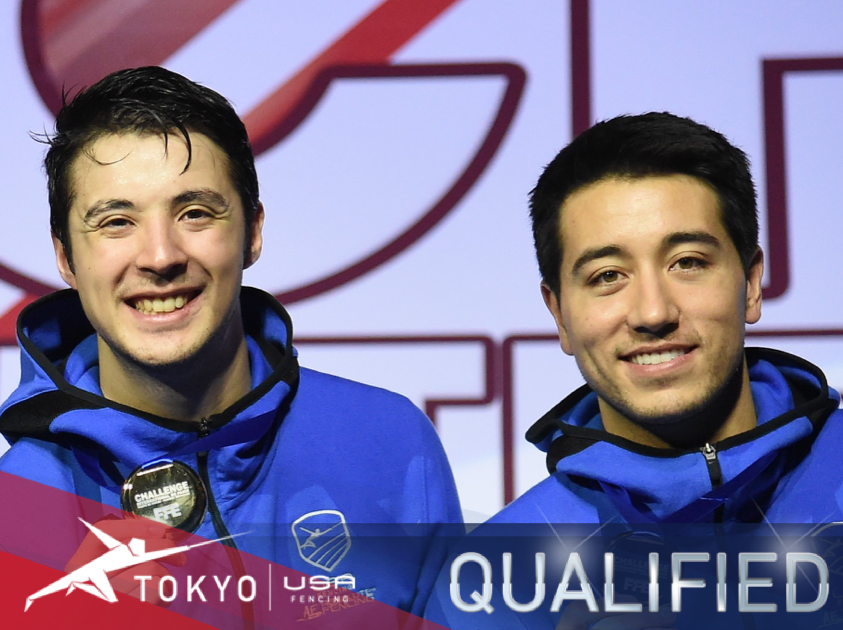 (Colorado Springs, Colo.) – Together they became the first team from of any nation to qualify for the Tokyo Olympic Games, locking their position in Tokyo with a gold medal at the Bonn World Cup in November as the fourth straight gold medal during the Olympic qualification period for the squad.

Together they have combined for seven individual podium finishes, including two gold medals, on the World Cup circuit since the Olympic qualifying period began last May.

And together Alexander Massialas (San Francisco, Calif.), Gerek Meinhardt (San Francisco, Calif.), Nick Itkin (Los Angeles, Calif.) and Race Imboden (Brooklyn, N.Y.) will compete as the U.S. Men’s Foil Team at the Tokyo Olympic Games where they will attempt to follow the squad's historic Senior World Championship win in 2019 with the first-ever Olympic title in a team event for the United States.

With one international and one domestic tournament remaining in the Olympic qualifying period, the U.S. Olympic Men’s Foil Team is set with Massialas, Meinhardt, Itkin and Imboden locked into the top four positions in the USA Fencing National Team Point Standings.

Massialas and Meinhardt have guaranteed that they will fence in both the individual and team events in Tokyo following their results at the Cairo World Cup in Egypt on Saturday where Massialas won bronze and Meinhardt finished fifth. Itkin and Imboden are currently third and fourth in the National Team Point Standings. The top three fencers at the conclusion of the USA Fencing Division I National Championships on April 17 will fence both individual and team events in Tokyo with the fourth athlete qualifying as a replacement fencer for the team event only. All nominations to the 2020 U.S. Olympic Team will be made following the completion of the selection period and are pending approval by the U.S. Olympic and Paralympic Committee.

Teammates together at the Massialas Foundation since their days as youth fencers, Massialas and Meinhardt have competed on the last two Olympic Teams together with Massialas earning individual silver in 2016 and both fencers competing on the team that won bronze in Rio with Imboden and Miles Chamley-Watson (New York City, N.Y.)

Tokyo will mark the third Olympic appearance for Massialas and fourth for Meinhardt who also fenced at the 2008 Olympic Games in Beijing. In addition to both being trained by Alexander’s father, three-time Olympian Greg Massialas (San Francisco, Calif.), Meinhardt and Massialas also are each former NCAA Champions. Meinhardt won individual titles in 2010 and 2014 for Notre Dame with Massialas earning the 2013 and 2015 golds for Stanford.

Itkin, a two-time NCAA Champion for Notre Dame, and Imboden each remain in pursuit of the third individual slot in Tokyo which could come down to the results of the Absolute Fencing Gear® FIE Grand Prix in Anaheim on March 15.

At the World Cup in Cairo, Massialas and Meinhardt fenced off for a position on the podium with Massialas earning the win in the quarter-finals, 15-11, after falling to his teammate in the finals of the Torino Grand Prix two weeks ago.

Massialas went to win bronze, dropping his only bout of the day to 2018 Senior World bronze medalist Carlos Llavador (ESP), 15-3, in the semifinals.

Meinhardt opened his day with a 15-8 win over Chamley-Watson – a 2013 Senior World Champion in the individual event who was attempting to qualify for Tokyo after winning gold with Meinhardt, Massialas and Imboden at the 2019 Senior Worlds and bronze in Rio.

Itkin and Imboden were each eliminated in the table of 64 with Itkin dropping his bout to Leszek Rajski (POL), 15-13, and Imboden falling to Llavador by the same score.

Competition continues on Sunday with the Massialas, Meinhardt, Itkin and Imboden competing in the team event.