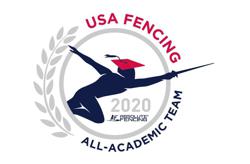 (Colorado Springs, Colo.) – The 2019-20 Absolute Fencing Gear All-Academic Team is one of the largest in history, boasting 764 fencers who showed outstanding success in the classroom earning a 3.4 GPA or higher.

Athletes who earned a 3.85 GPA qualified for the First Team with athletes earning from 3.4 – 3.84 claiming Second Team honors.

Sixteen members of the Absolute Fencing Gear® All-Academic Team not only earned First Team honors for all four years, but have committed to fence for NCAA programs during the upcoming season:

Among the nearly 250 clubs represented on the All-Academic roster, Alliance Fencing Academy claimed the most team members with 17 fencers, including 13 First Team members.

Fourteen clubs boasted at 10 or more All-Academic Team members, including: