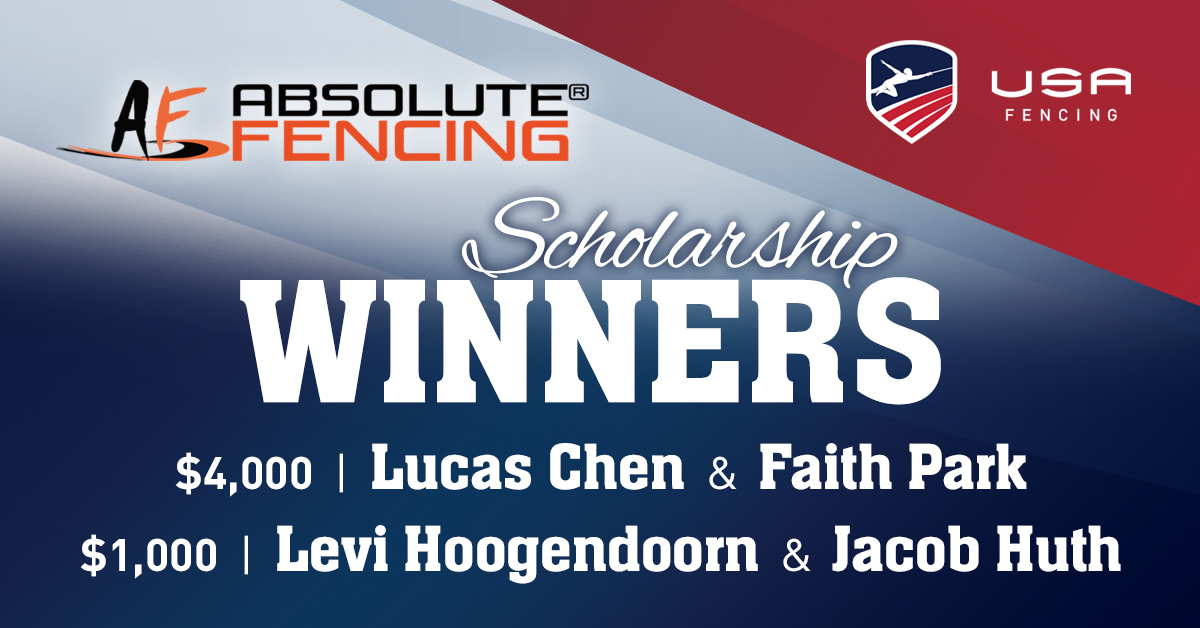 (Colorado Springs, Colo.) – USA Fencing is pleased to honor four outstanding high school fencers who have been awarded scholarships from Absolute Fencing Gear® as members of the 2019-20 All-Academic Team.

Through a partnership with USA Fencing, Absolute Fencing Gear® provides $10,000 in scholarships annually to two male and two female high school students, including two $4,000 scholarships and two $1,000 scholarships. Winners were selected based upon an essay they submitted to the following prompt:

Describe the most significant defeat you have faced in the sport of fencing. What challenges did this defeat pose for you, and what steps have you have taken to address them? Include information about a particular person, group, or philosophy that you found particularly helpful.

Both winners of the $4,000 scholarship are rising high school juniors.

Born and raised in Southern California, Lucas Chen was introduced to the sport of fencing by coming along to watch his brother take lessons. While fencing didn’t turn out to be his brother’s sport, Chen did become quickly hooked and, after competing on the national circuit for the first time in 2017, qualified for Summer National that season as a Y14 saber fencer and returned in 2019 where he competed in both the Y14 and cadet events. The rising junior at San Marino High School is an Eagle Scout who also is a member of the speech and debate team at his high school where he serves as the vice president of competitions and the limited prep speech captain.

Five years after getting her start in fencing, 16-year-old epee fencer Faith Park won gold as a junior and silver in cadet at the 2020 Junior Olympic Championships where she was selected to represent Team USA in both the cadet individual and junior team events at the Junior World Championships. In addition to fencing, Park has played piano for 10 years who also gives back to her community through her church’s children’s ministry and helping organize charity fencing tournaments to benefit hospitals in Washington, D.C. Now a rising junior at South County High School, Park has hopes of pursuing a career in the medical field.

Each of the $1,000 winners were graduating high school seniors who will be enrolling in universities in the fall.

Saber fencer Levi Hoogendoorn began competing with her twin sister Sterre, also a four-year All-Academic Team member, and the two reached the podium together at their first SYC in the Y10 event in 2012. Not only has Hoogendoorn found success in fencing, earning a medal with her top-eight Summer Nationals finish in Div IA last year, but she also gives back to the sport as a referee. Off the fencing strip, Hoogendoorn she is a co-leader of Legacy 2020 – a refugee-based service club at Minnetonka High School – and enjoys baking, reading and working out at CrossFit SISU. Hoogendoorn will enroll at Northwestern in the fall.

When Jacob Huth moved from Ohio to North Carolina as a homeschooled sophomore, he found himself in a new region of the country, but fencing remained a constant for the A-rated foil fencer who fences on the national circuit in both junior and Division I events. Huth is active in the Colonial Baptist Church where he participates in choir, student ministries and the church’s homeschool co-op. A proud member of the Choctaw Nation of Oklahoma, Huth also plays trumpet and guitar and will enroll at North Carolina State in the fall.