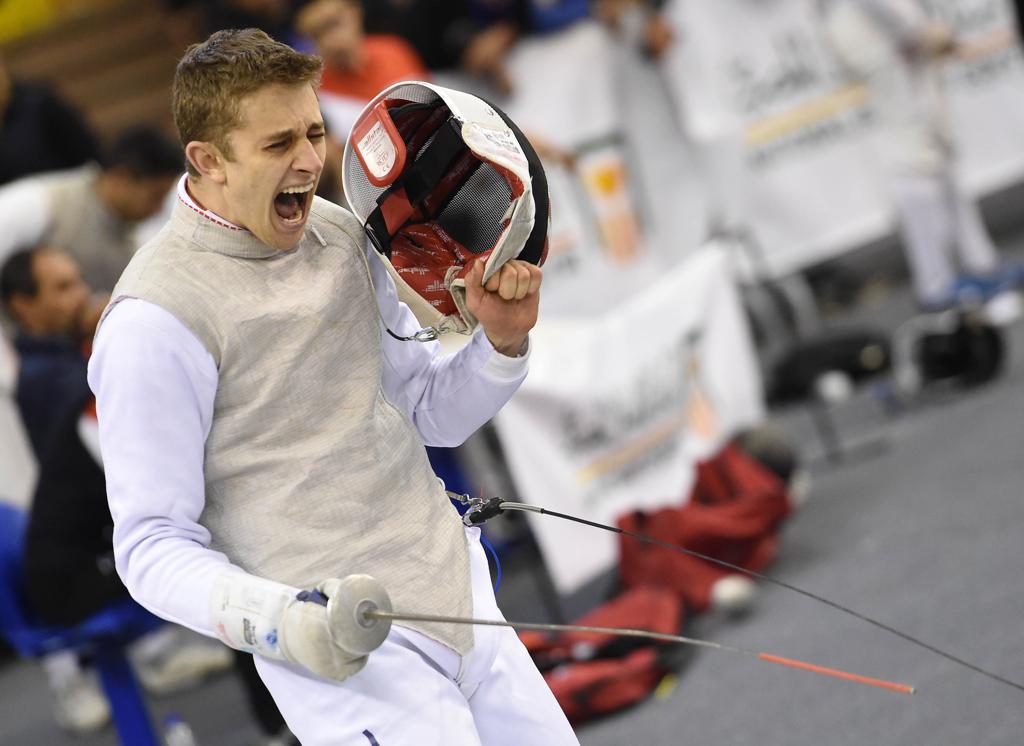 As the countdown continues to the 2021 Olympic and Paralympic Games in Tokyo, USA Fencing is sitting down with members of Team USA to share the stories behind their Road to Tokyo.

Nick Itkin (Los Angeles, Calif.) has quickly become one of Team USA’s top men’s foil fencers. After winning Junior Worlds in 2018, Itkin took the senior circuit by storm, winning bronze in Bonn later that year by beating some of the world’s top fencers. Now with three World Cup medals as a senior, including gold in in Paris, Itkin has qualified for his first Olympic Games and will compete both individually as well as in the team event.

A junior at the University of Notre Dame, where he’s won two individual NCAA titles and two team titles, Itkin discusses his emotions qualifying for Tokyo and joining a successful men’s foil team, his love for the sport and the big moment, his favorite cheat day meal and who he’d most love to meet this summer in Tokyo.

1. Nick Itkin, 2021 Olympian, competing in both the individual and team events. How does that sound?

It’s definitely something I’ve been working for for a very long time, so it definitely sounds amazing to hear. It’s been a dream of mine since I was a kid, so it’s definitely a first part of a goal that I’ve now accomplished and I’ve always dreamed to have a medal in the Olympics, so I’m ready to keep trying and keep working.

2. Has it sunk in yet that you get to compete at the Games (in both the individual and team events)?

I think it kind of has, but I think I won’t really understand what’s going on until I get there. As soon as I get there, I think I’ll have more emotions. Right now, I’m just focused on training and being ready for it.

3. Are you one of those people that thought about the Games every day, or even though it was a goal, were you trying to not think about it and take everything day by day? Where are you on that spectrum?

Honestly, I would say I’m closer to thinking about it every day. I don’t know if that’s necessarily most common, but it’s always in my head. I always think about it. I watch videos of the Olympics all the time. [The Olympic rings were] the wallpaper on my phone. It’s always my dream. It’s always what I’m working for.

4. So you come home from the last international Olympic qualifier in Doha and you’ve secured your individual spot, and Notre Dame also won NCAAs as a team that weekend. Sounds like a pretty good weekend?

Yeah definitely. I’m super proud of my teammates for the way they competed [at the NCAA Championships]. It was definitely a good situation for the school. I’m super happy that I’m lucky to be in a team where my coaches and teammates were totally understanding that I had to be away and they were totally supportive.

5. You’ve talked about how much being a collegiate fencer has helped you become a better fencer. Why?

I just think college fencing is definitely another mental challenge to have, because especially now – maybe not so much when I was a freshman – but everyone is coming at me and they’re going to scream and yell and for every touch they get. They’re super amped up and ready to fence that bout, so I have to take every bout seriously and be ready for every touch, so it’s definitely a mental aspect to have because no bout is going to be easy just because every single person is out to get me and you just have to ready for every touch no matter who you’re fencing against.

6. What foods do you miss most when you’re on the road traveling abroad?

Normally, when I’m abroad, I always eat pretty well, so after eating very healthy and well for that long of a time, I normally come back and get a cheat meal or some fast food meal, so I’m always excited to get that when I come back … I love In-N-Out. Whenever I’m in LA, I used to go all the time. Definitely one of my favorite spots.

7. So I’ll ask ... Is In-N-Out the best hamburger fast food chain and what do you order?

That’s a bold statement, but for me, 100% … it’s the burger that was perfect for me … I get a double-double with everything on it and then I get animal style fries.

8. You had the bubble camp here in Colorado Springs last month. What was that like?

It was good. For me, that was the first time really for most of the break where I fenced that much and had that many competitive bouts, and that’s really what I needed and I missed a lot, so just being back there and training with my teammates, I think we all got more ready and we all gained a lot from that camp. I’m pretty sure we’re considering coming back again before Tokyo … It was good food, good training. Plus, I was on school online, so I was able to do that as well.

9. Talk to me about this team and joining a very successful men’s foil squad. What’s it like joining this team?

Of course, it’s a very successful squad. Everyone knows that, so it’s not an easy team to be on. [I] started competing on the team not this last season, the one before that. It’s been an amazing experience competing on them and we’ve had a lot of success. We’re very confident coming into Tokyo and I just love being a part of this team and the culture that we have is definitely special and I think we’ll be ready to show ourselves in Tokyo.

I would just say another young figure who has a lot of energy and excitement. They all have a lot of experience, so I think I can learn from them and bring the energy and a youthfulness as well … I would bring my own style of fencing because we all have our own unique styles and our game.

11. How would you describe your style?

At first, I would always be very defensive in general when I was younger and I like being more aggressive now. I like going off the line. I like normally going forward, so I like fencing in the middle of the strip necessarily. In the beginning, when the ref says “ready, fence” I like to go forward now instead of going back.

12. What caused that change?

I was kind of scared to go forward because I didn’t think I had a lot of actions forward, but now I like fencing in that situation where both people are going forward. I enjoy that situation where we’re both fighting to get our attack, but I also feel like I have a strong defense where I can incorporate parry ripostes and counterattacks and attacks on preparation because I feel like that’s definitely another really strong aspect to my game.

13. Do you have any fencers you looked up to growing up, whether nationally or internationally?

Nationally, I definitely looked up to everyone that was on our team, like the top four. I’d always look up to them and watch all their bouts, like when Miles [Chamley-Watson] won World Championships, I remember watching that in Hungary at the time and that was crazy to me. And then when Alex [Massialas] medaled in Rio, I was super excited for those moments. And then, my favorite international fencers were [Italian Andrea] Baldini and [Japanese fencer] Yuki Ota. I especially really loved Baldini’s fencing and I was kind of obsessed with it at one point.

14. What’s it like going from watching to competing against some of these guys?

15. Almost three years ago exactly, you won Junior Worlds. What do think about when you think about that experience?

16. I’m sure you get asked about this a lot, but your 12-2 comeback in Shanghai was one of the most impressive comebacks I’ve ever seen. What’s your mindset when you’re down like that and how do you make that comeback?

It’s funny, I feel like I get this question a good amount of times. It was definitely a crazy bout. I just remember having one thought in my head where I was like, ‘Okay. I’m just going to try to do this action in this timing.’ And then I got a few touches in a row and I got a little momentum, but in the back of my head, I’m not really thinking about winning the bout. I’m just thinking about doing this one action. And then I ended up adding in another action and then I had these two actions I just did on repeat. I didn’t really do anything else the rest of the bout. I just had these two moments, which I found the timing for and it was working, and I just continued doing it without even worrying about winning the bout. I was just focused on those two actions, because I still didn’t really realize I had a chance of winning this bout until it was 14-11 or 14-12 I was down. Then I kind of realized, ‘Wow, I actually have a chance’ but other than that, I was like, ‘okay, I’m just going to keep doing these two actions and see how it goes.’

17. Do you have any favorite opponents to fence?

18. Overall, why do you love the sport of fencing?

I love the sport for many reasons. When I was a kid, I don’t think I had the same admiration and, even obsession, for the sport as I do now. Growing up, I enjoyed fencing, but I never really thought of it as something I would really fall in love with. When I got older, and the more I started fencing, the more I started realizing how much there is to the sport and how much it gives to me, and even this whole last year without the sport, my life is completely different without it. I just love the competition and the drive it gives me and I just love learning about other fencers and fencing new tactics. I love learning more about the sport and just competing at a high level. I love competing, especially when there’s a crowd and people watching, I love that feeling. Especially when you score a nice touch, it’s a feeling that rarely compares.

19. What’s something you always have with you when you travel?

I would say – this is kind of a generic answer, but my computer. The day before the competition, like the night before or traveling, I bring my computer to watch a show or a movie, just to relax and not thinking too much if it’s a day before a competition. I’d either go out with my teammates to a restaurant or something or I would afterwards in my room just watch something.

21. I know you’re a big sports fan generally. Is there any athlete you’d like to meet at the Games?

Well my favorite athlete was definitely Kobe [Bryant], so that would’ve been the dream, but any athlete … obviously this is kind of everyone’s dream, but LeBron [James] is definitely another person I look up to since I’m also a big Lakers fan, so he’s now a big player for the Lakers and also one of the greatest, so I’d definitely be honored to meet him as well. I have a lot of respect for him and way he carries himself and for what he’s been able to accomplish and how he treats people and his family.