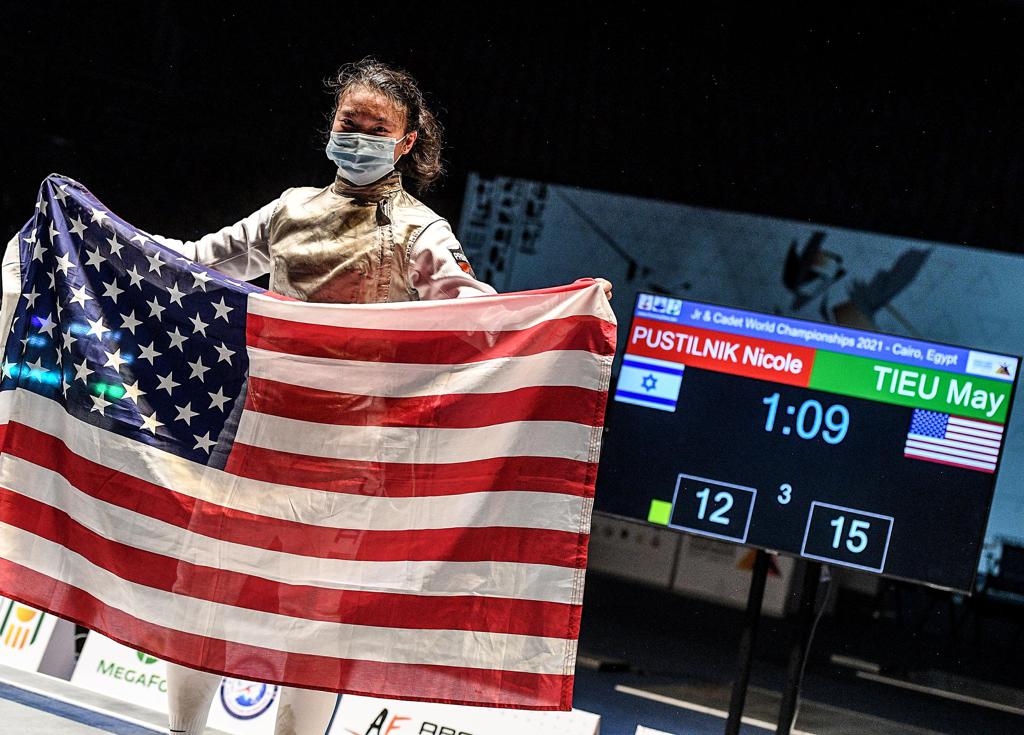 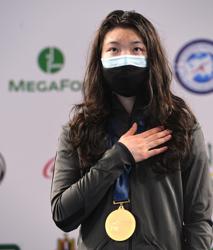 May Tieu on the podium in Cairo. Photo Credit: #BizziTeam.

Tieu continues a powerful streak for the U.S. Women’s Foil Team in which a member of Team USA has medaled in the event at every Junior Worlds since 2011.

“It feels so unreal. It’s been such a long time since I’ve had this kind of competition, so it’s very exciting to bring home a gold medal,” Tieu said.

No. 10 in the world entering the competition, Tieu earned a bye into the table of 64 with a 5-1 record in pools.

In the table of 16, Tieu faced five-time Junior World Team member and two-time Junior Pan Am individual medalist Katina Proestakis (CHI) in what would be her closest bout of the day. Down 8-7, Tieu scored four straight points to take an 11-8 lead and went on to win, 15-13.

One win away from a medal, Tieu bested Vitalina Anaschenkova (RUS), 15-9. Tied at three, Tieu went on a 10-3 run and never relinquished her lead.

Down 4-3 at the first break in the semifinals to 2019 Junior World team bronze medalist Yeongji Joo (KOR), Tieu took the momentum to start the second period, scoring the first six touches to go up, 9-4. Up six at the second break, 11-5, Tieu once again opened the period on a run, closing the bout on a 4-0 run for a dominant 15-5 victory.

Fencing for gold, Tieu used another strong close to edge out three-time Junior World Team member Nicole Pustilnik (ISR) and clinch the championship. Close throughout, Tieu broke a 10-10 tie by scoring the next four points and earned the gold medal by a 15-12 score.

Entering the competition as the reigning champion in both junior and cadet, Scruggs was perfect in pools at 6-0 to secure the No. 2 seed and a bye to the table of 64, where she blazed past Sabrina Fang (CAN), 15-7, before handing three-time Junior World Team member Ariadna Castro (ESP) a quick loss, 15-6.

Against four-time Junior World Team member Kateryna Budenko (UKR) in the table of 16, Scruggs faced a 9-7 deficit, but scored four straight points to take a two-point lead and never looked back, winning 15-12.

Tied at nine with 2019 Senior World Team member Jessica Guo (CAN) in the quarterfinals, Guo scored two touches to give herself a small cushion. Scruggs cut the gap to one, but Guo ended the bout on a 4-1 run for a 15-11 win and ensuring that a new champion would be named in 2021.

In the table of 16, Weintraub fenced 2017 Cadet World Champion Adelina Bikbulatova (RUS), who had eliminated teammate and two-time Junior World Team member Zander Rhodes (South Orange, N.J. / V Fencing Club) in the 64. Down 6-4, Weintraub held Bilbulatova scoreless the rest of the way, going on an 11-0 run for a 15-6 victory.

However, in the quarters, Weintraub lost to Pustilnik, 15-11. Although Weintraub was up 9-7, Pustilnik responded for four consecutive touches to take the lead. Weintraub came back to tie the score at 11, but Pustilnik has the answer once again, finishing on another 4-0 run.

All four members of Team USA went 6-0 in pools and earned byes to the table of 64 with Olivares taking the No. 1 seed.

The quarterfinals saw Olivares face a five-point deficit against Stepan Martynovich (RUS) early, but the 2021 NCAA Champion cut the deficit to two at 8-6. However, Martynovich went on 6-1 run and ended Olivares’ day, 15-8, and he finished fifth.

Looking to guarantee a medal, Bravo came out of the gates strong in the quarterfinals, building an 8-1 lead. But Dongyun Choi (KOR) proved too much to handle with Bravo losing on the final touch, 15-14. Choi went on to take silver.

Zhang, who will also compete in the cadet event, overcame Mario Diaz Escalona (ESP), 15-7, in the 64, but was outtcouhed by Mukhammad Yusuf Asranov (UZB), 15-14, in the following round.

Daniel gave up just four points in his table of 64 bout against three-time Junior World Team member Alexandru Pirva (ROU), 15-4 before being edged out by Martynovich, 15-13.