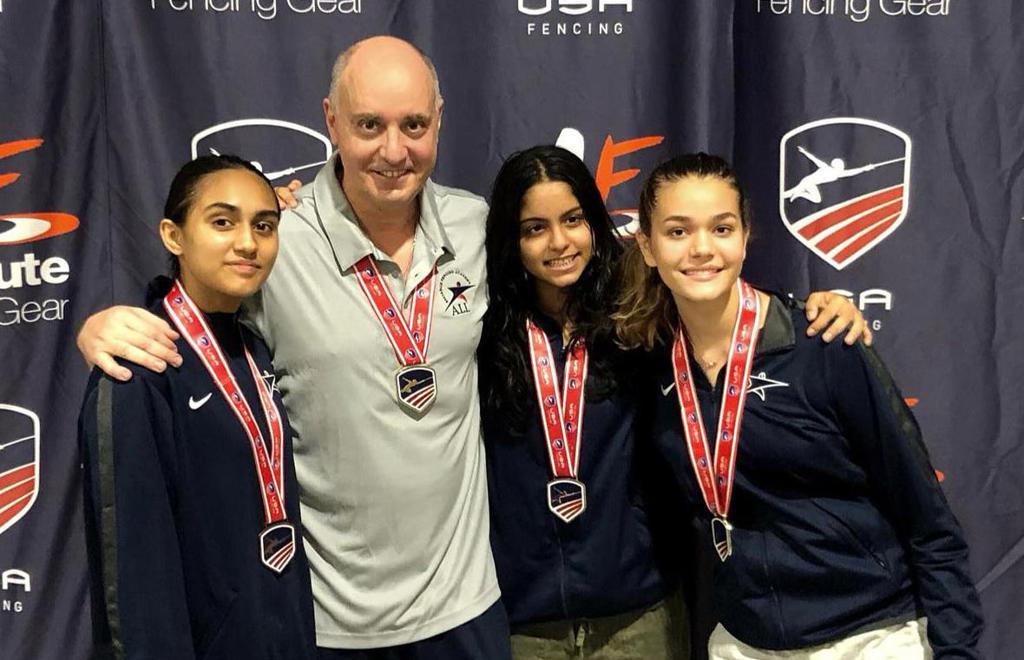 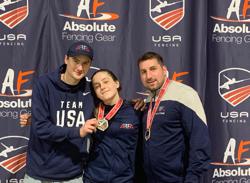 Improving on her bronze medal finish in Y14 at the 2019 National Championships, Khamis didn’t give up more than seven points in her third three direct elimination bouts.

After a 15-10 victory in the quarterfinals, Khamis faced her biggest test of the day in the semis against Jolie Korfonta (McLean, Va. / Penta Olympic Fencing Club). Down 11-10 in the second period, Khamis scored two straight single lights to take the lead and went on to secure a place in the gold medal final, 15-13.

Fencing a two-time Y14 medalist on the circuit this season who was named cadet national champion just days ago for gold in Sophia Jakel (Bethesda, Md. / DC Fencers Club), Khamis scored the final two points of the first period to take a three point lead into the break, 6-3. In the second period, Khamis, the cadet bronze medalist at the May North American Cup, outscored Jakel, 9-4, to return to the top step of the podium, 15-7.

With her gold in the Y14 women’s saber event, Mika medaled at all three national events this season and clinched her second national title at Summer Nationals after winning gold in cadet earlier this week.

With the score tied at 10 against Nisha Hild (Holliston, Mass. / Zeta Fencing) in the final, Mike once again ended strong, finishing on a 5-1 run to win her first national title, 15-11.

For Hild, the silver marked her first at a national event. Jenna Shoman (Short Hills, N.J. / Manhattan Fencing Center), who won gold in Y14 at both the April and May NACs, also claimed bronze.

The gold marked Lung’s second medal in Y14 this season. She also won bronze in cadet at the May NAC. For Liu, the silver is her best result at a national event in Y14. Oyang earned her first career podium finish at a national event with bronze while Gebala’s bronze added to her collection of bronzes she won at the 2019 National Championships in Y10 and Y12.

Perfect on the day, Lung took the No. 1 seed out of pools and kept five of her six opponents to single digits, with her closest bout coming in the table of 16 at 14-12. Against Ouyang in the semis, Lung finished the bout on a 7-1 run to overcome Oyang, 15-8.

MFC Team 1 advanced to the final with a 45-43 victory over Globus. In a tight and back-and-forth final against Boston Fencing Club, MFC Team 1 faced a 40-38 deficit going into the final bout. Completing the come-from-behind victory, MFC Team 1 won the anchor leg, 7-3, to clinch the gold, 45-43.

Facing BBFC in the final, Alliance Fencing Academy 1 won two of the final three bouts to overcome a four-point deficit and take the gold, 45-43.

Six golds were also handed out in the veteran team events.

After a 45-25 victory over 300 in the semifinals, The Troublemakers claimed the gold with a 45-24 win over Stab Happy’s (Nazlymov Fencing).

In the women’s team foil event, Team FeNCe easily made its way into the gold medal match with wins over PJMax and The Place Holders at 45-16 and 45-17, respectively. Going for gold, the squad defeated Old But Still Lit, 43-28.

Coming out on top in the women’s team epee event was The Roses. Following a 45-18 victory over Head Cases Anonymous, The Roses clinched the gold with a 45-30 win over 2 Dollar Bourbon and a 45-27 victory over Vaccinated Vanquishers.