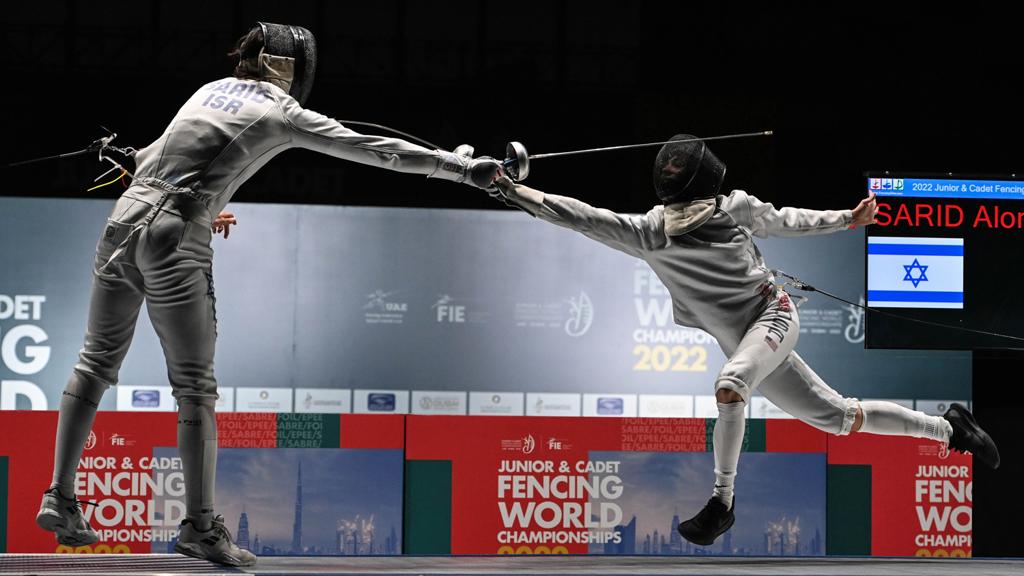 Down 12-6 in the semifinals against the tournament’s top seed, Samuel Imrek (Alliance Fencing Academy) was on the ropes. But something inside him — plus some timely encouragement and tactical advice from his coach — told him to keep going.

Imrek bounced back, scoring nine of the final 11 touches, to win his semifinals bout and advance to the cadet men’s epee finals, where he secured a gold medal — one of five epee medals for Team USA at the 2022 Junior & Cadet Fencing World Championships in Dubai, United Arab Emirates.

“I was thinking it was over,” Imrek says. “But something inside of me just kept going, and I was able to score and close it out.”

There’s a message in that for any fencer.

“Never doubt yourself,” Imrek says. “Just keep on going, even when it’s really hard. Keep on pushing it, and one day you might be world champion.”

In junior women’s epee, Hadley Husisian (Fencing Sports Academy) took the gold medal, bouncing back from some mixed results in the pools to fence flawlessly in the elimination rounds and emerge atop the 161-athlete event.

“I just tried to not let the score get to my head whether I’m up or down,” Husisian says. “It’s been a tough year — a lot of training, a lot of adversity. It’s just great to do this for myself and for my coach and for my family and for everyone who supported me.”

Husisian made it to the finals after fencing her teammate Ketki Ketkar (Kaizen Fencing Academy) in the semifinals. Ketkar brought home bronze.

On the last evening of the championships, Team USA advanced to the finals of the junior men’s epee team event, where it lost to Egypt to earn a silver medal. That same evening, Team USA’s junior women’s epee team made the podium after battling Sweden for a bronze.

In all, epee ended a fabulous trek to Dubai for Team USA after similarly successful results in saber and foil.

To meet the saber and foil teams, read our Junior & Cadet Worlds preview