For Pride Month, USA Fencing Offers Support, Tips and a Call For Nominations to Our PRIDE+ Community Council

June is Pride Month, and at USA Fencing, we proudly stand with the LGBTQ+ community during this month and beyond. 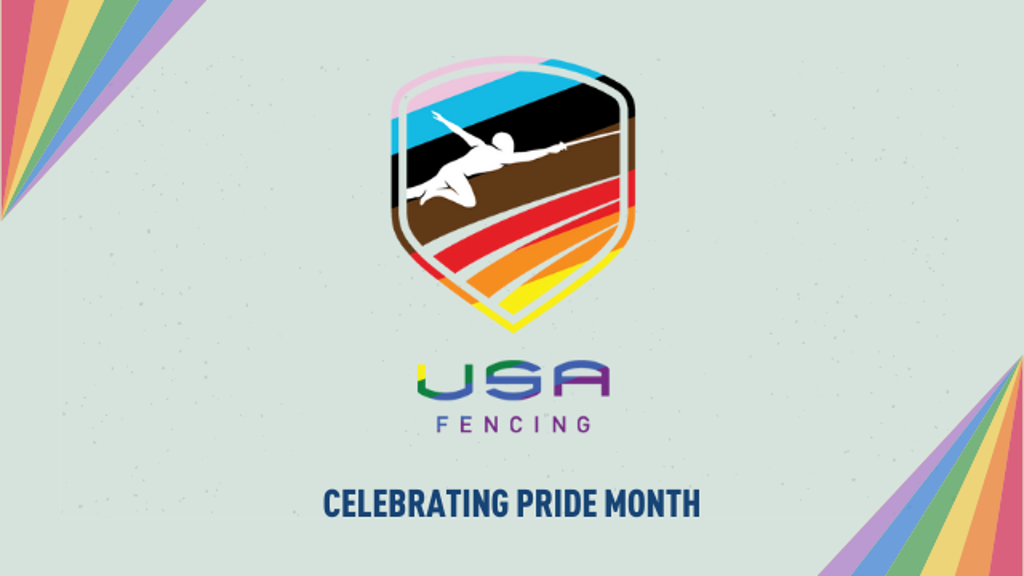 June is Pride Month, and at USA Fencing, we proudly stand with the LGBTQ+ community during this month and beyond. We acknowledge and encourage our fencers, coaches, staff, and community to be their authentic selves — unapologetically — today and every day!

We believe that visible symbols of support are important (social media posts and pride editions of our official logo, for example), but we also want to provide resources to help the fencing community be more inclusive and welcoming to the LGBTQ+ community.

We’ve shared those resources below.

Furthermore, to demonstrate our commitment to advancing inclusion and belonging within the fencing community, we are launching our first ever PRIDE+ Community Council. This resource group will meet bimonthly to help USA Fencing ensure we are highlighting the experiences of the LGBTQ+ community, understanding what the community would like to see from our organization and fostering a safe space where everyone can enjoy the sport of fencing.

The council will include a mix of fencers, coaches and referees, as well as community and thought leaders who can help evoke positive sustainable change for the LGBTQ+ fencing community.

To nominate yourself or someone you know for the PRIDE+ Community Council, use this simple form.

Nominate Someone (or Yourself) for the USA Fencing PRIDE+ Community Council

Best Practices to Be Inclusive and Welcoming to the LGBTQ+ Community

Here are some of our suggestions:

The following terms are used to assist in understanding this guide. The terms below will vary and evolve according to region, race/ethnicity, culture, etc.

Sexual Orientation: A person’s romantic and/or sexual attraction to other people͘. This includes being heterosexual/straight, gay, bisexual, queer, asexual, or many other terms used to describe sexual orientation. This is different and distinct from gender identity/expression. Transgender and nonbinary people may identify as heterosexual/straight, gay, lesbian, asexual, or any other sexual orientation.

Gender Identity: One’s deeply held knowledge of their own gender, which can include being a man, woman, neither, or both genders. Gender identity is not always outwardly visible to others. One’s gender identity may or may not align with society’s expectations of the sex they were assigned at birth (male, female, or intersex).

Gender Expression: The way in which a person expresses or presents their gender. This might include hair styles, fashion, mannerisms, etc. The way one expresses their gender can change.

Cisgender: A person whose gender identity aligns with the gender society associates with the sex they were assigned at birth.

Nonbinary: A person whose gender identity is not exclusively male or female, including those who identify with a different gender, a combination or genders, or no gender. Nonbinary may be considered a subset of transgender, but not everyone who is nonbinary considers themselves transgender.

Queer: A term which embraces a variety of sexual preferences, orientations, and habits of those whose sexual orientation is not exclusively heterosexual. Many who identify as queer suggest that the terms lesbian, gay, and bisexual are perceived to be too limiting and/or boxed within societal connotations they feel don’t apply to them. The term was once considered derogatory and offensive, but the community has reclaimed the word and now uses it widely as a form of empowerment.

Two-Spirit: A contemporary term generally used by indigenous communities (North American and Canadian First Nations) that is used to describe a person whose spirit is a blend of a feminine and masculine spirits. It may encompass same-sex attraction and a wide variety of gender variance, including people who might be described in Western culture as gay, lesbian, bisexual, transsexual, transgender, gender queer, cross-dressers or who have multiple gender identities. This term honors the indigenous heritage and provides an alternative to the Western labels of LGBTQ+.

We offer these links to help as you expand your understanding of LGBTQ+ equality.