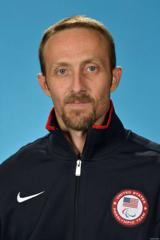 A first-time Paralympian, Brinson will compete in the Category B saber event. Although his teammates qualified through victories at the Pan American Wheelchair Championships in 2011, Brinson’s event wasn’t held at the tournament and he qualified through the World Ranking system in April.

“The season to qualify for London was long and required a lot of hard work.  I knew I needed to be at least ranked in the top 16 at the end of the season to have a chance for the London team,” Brinson said of the grueling World Cup circuit he earned points at to qualify for the Games. “I knew I was ranked 14 at the end of the season so I had a good chance to make the team.  While I was waiting to hear if I made the team, I kept a positive attitude and continued with my training. When the news came it was like a huge weight lifted if my shoulders.”

Although Brinson competed at his first Wheelchair Worlds last year, he said he is coming to London with gold as his goal.

“My goal at any competition is to win. I trained and prepared well and I want to leave the impression that I deserve to be there,” Brinson said.

The competition schedule is as follows (All times local):

Visit www.paralympic.org for the complete schedule of which events will be streamed live from London.