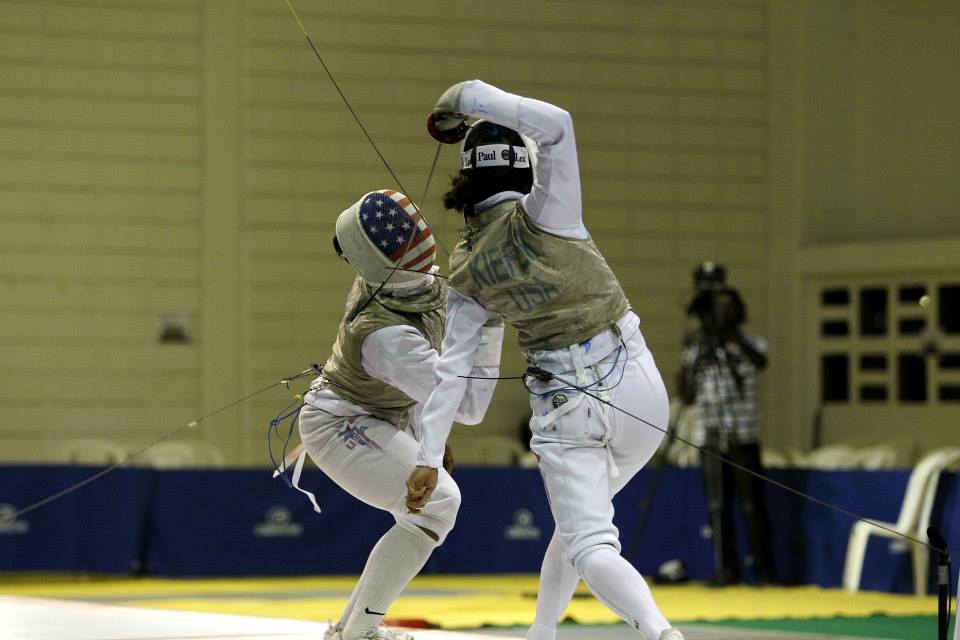 Kiefer, Prescod, Lu and London Olympian Nicole Ross (New York City, N.Y.) advanced to the quarter-finals for a chance at making Team USA the first nation to sweep all four medals in Pan Am history.

Lu, Ross and Prescod earned the top three seeds in the tournament after undefeated results in the pools. Although Kiefer dropped a pool bout, her fifth seed still meant that all four fencers were in separate quadrants of the direct elimination table.

Fencing at her first Pan Ams, Lu advanced to the semifinals after a 14-12 win over Flavia Johana Mormandi (ARG). Prescod, a 2009 Pan Am Champion, secured her fourth Pan Am Zonal medal with a 15-10 victory over Saskia Loretta Van Erven Garcia – the Colombian who upset Prescod in the semifinals of the 2012 Pan Ams in Cancun.

Kiefer set up an all-American semifinal against Lu after she defeated Nataly Michel (MEX), 15-7, in the quarters, but Ross lost her bout to 2012 Pan Am medalist Alanna Goldie (CAN), 15-7, and finished fifth overall.

In the semifinals, Lu, Kiefer’s teammate at the last three Junior World Championships, took a 2-0 lead early in the first period, but Kiefer scored seven straight in the final two minutes to build a 10-4 lead at the break. Kiefer outscored Lu, 5-3, in the second period to win the bout, 15-7.

In the second semi, Prescod outscored Goldie, 9-4, in the first period and rattle off four unanswered touches in the next period to win the bout, 15-6.

Although Kiefer and Prescod are both ranked in the top eight in the world senior rankings, the two haven’t fenced each other in competition since the October North American Cup in St. Louis where Kiefer took the win in their quarter-final bout. Since then, however, 20-year-old Prescod has had one of her best senior seasons ever, winning both the Division I Nationals in April and becoming the first U.S. women’s foil fencer to claim a Grand Prix title in Marseille last month.

Fencing in heat that climbed over 90 degrees and with no coaches, as is the custom when teammates fence each other internationally, Kiefer came out with a quick, 3-0 lead that grew to 7-3 late in the first period. After a request for a weapon change, however, Prescod scored three of the next four touches by the break.  In the second period, Prescod took the first four touches to take a 10-8 lead. Kiefer battled back to tie the bout at 12 and her fourth unanswered touch gave Kiefer a 14-12 lead. Not ready to give up, Prescod tied the score at 14, but Kiefer took the victory, 15-14.

Kiefer’s win makes her the second fencer ever to take four straight titles at the Pan Am Zonal Championships. Two-time Olympic Champion Mariel Zagunis (Beaverton, Ore.) won four straight between 2009 and 2012 and will vie for a fifth when the women’s individual saber competition is held on Monday.

In the quarter-finals, Thompson fenced Ringo Quintero Alvarez – a member of a strong Cuban team that was making its first appearance at the Pan Ams since 2010. Alvarez upset the two-time Olympian, 15-14, and went on to win bronze.

The win was the second of the day for the Cuban over Team USA as he also defeated Jason Pryor (Colorado Springs, Colo.), 15-14, in the table of 32.

First time Pan Am Team members Adam Watson (Richfield, Vt.) and Alexander Tsinis (Little Neck, N.Y.) both advanced to the table of 16 where they placed 12th and 14th, respectively.

Watson defeated Colombian Gustavo Coqueco, 15-8, in the table of 32, but missed the quarter-finals by a touch when he lost to Fidel Ferret Ferrer (CUB), 7-8, in overtime in the table of 16.

Finals will be streamed live through the FIE YouTube Channel beginning at approximately 5 p.m. Central on Monday. Click here to view the live stream as well as the replay of the men’s epee and women’s foil finals.