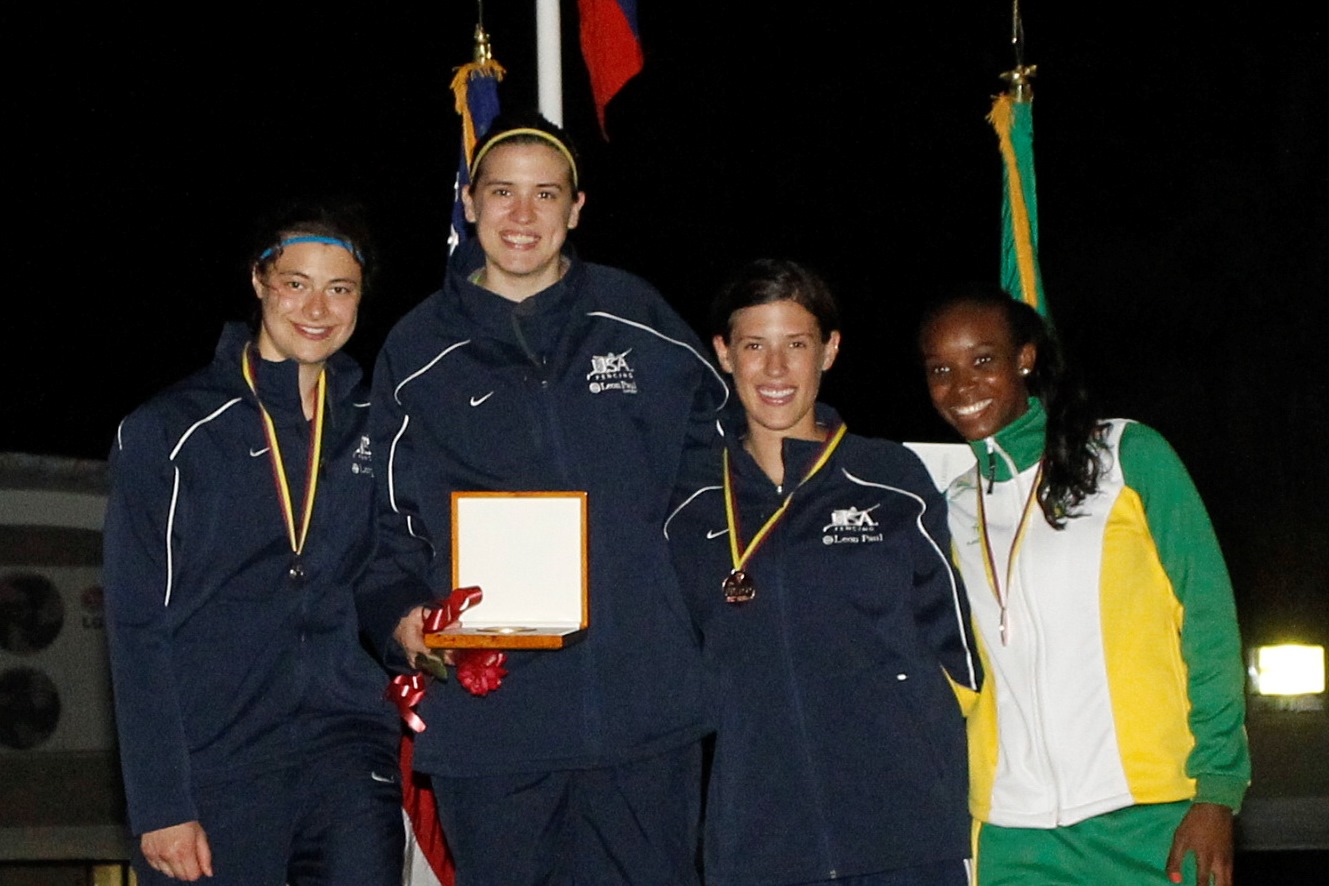 The evening semifinals was a rematch of the 2011 Pan Am Championships gold medal bout as Hurley took on her older sister, two-time Olympian Kelley Hurley (San Antonio, Texas).

Courtney took an 8-5 lead, but Kelley came back to tie the bout first at eight and then at 10. Courtney scored three of the next five touches to take a 13-12 lead and then the sisters doubled out to 15-14.

Fencing at her first Pan American Championships, two-time Junior World Team medalist Kat Holmes (Washington, D.C.) won three straight bouts to advance to the semifinals where she took a 3-0 lead against Cleia Guilhon (BRA). The athletes were called for non-combattivity and the bout was sent into the second period where Holmes took the lead to 8-1. Up 11-3 at the break, Holmes finished the bout, 15-6, for the win.

Although Courtney Hurley is just 22-years-old, she remains one of the most experienced women’s epee fencers on the Pan Am circuit with six past medals at this event to her credit. Following a tied score at the break, Hurley showed her experience by leading for most of the second period which she closed at 12-10. In the final period, Hurley was up 14-11, but Holmes came back with three single touches to tie the bout at 14. Hurley, who anchored Team USA to the bronze medal overtime win in London, kept her composure and scored a single to win the bout, 15-14.

London Olympic medalist Maya Lawrence (Teaneck, N.J.) battled bronchitis in Colombia and a 2-4 result in the pools gave her a 31st seed in the table of 32. Lawrence took out the #2 seed, Marisol Ona Gil (CUB), 15-10, in her opening bout, but finished 16th after a 15-11 loss to Yoslaine Cardenal Ventosa (CUB).

In the men’s saber competition, 2012 Olympian Daryl Homer (Bronx, N.Y.) was considered by many to be the favorite to win gold – a title he claimed in 2011.

Ranked seventh in the world, Homer earned the top seed after an undefeated run in the pools. In the semifinals, Homer led three-time Olympian Renzo Agresta (BRA), 8-6, at the break. Agresta, who defeated Homer’s teammate Eli Dershwitz (Sherborn, Mass.) in the table of 16, came back in the second period to take a 14-13 lead. Homer scored during the next exchange to tie the score at 14 and then received a yellow card for delaying the bout. After four simultaneous attacks, Homer jumped into the air and was countered by Agresta who won the bout, 15-14.

In the second semifinal, first-time Pan Am Team member Aleksander Ochocki (Linden, N.J.) led Philippe Beaudry (CAN), 8-6, at the break and held onto the lead in the second period before going on to win the bout, 15-12.

Fencing Agresta for gold in front of a rambunctious crowd, Ochocki came back from a three-touch deficit to cut Agresta’s  lead to one (14-13), but the Brazilian scored the next touch to win the bout, 15-13.

Earlier in the day, London Olympian Jeff Spear (Wynantskill, N.Y.) trailed Beaudry, 13-6, in the table of 16 and made an astounding comeback, but the Canadian went on to take the victory, 15-13.

Competition continues on Wednesday with the men’s epee and women’s foil team events.

Click here to view the replay of the men’s saber and women’s foil finals.