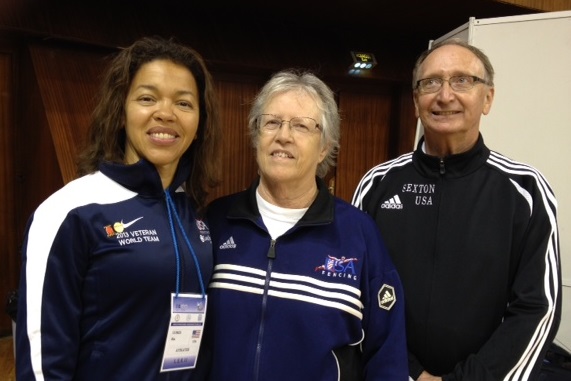 Six months after his 70th birthday, Ray Sexton III (Round Rock, Texas) entered the +70 men’s foil event as one of the competition’s biggest threats with eight past medals to his credit in the 50-59 and 60-69 categories.

Sexton went undefeated in the pools and made an early statement when he shut out Dominik Chren (CZE), 10-0, in the table of 32.

In the table of 16, Sexton gave up just two touches to Robert Schiel (LUX). He defeated Edmond Grangaud (FRA), 10-6, in the quarter-finals, but lost in the semifinals to Gary Aftandilov (RUS), 10-2.

Sexton’s teammate, Jim Adams (Rockville, Md.), has won medals at every Veteran Worlds since moving up to the +70 category in 2010 and began the direct elimination tables with a strong bout against Ahmed Hazemzein (EGY) whom he defeated, 10-3. In the table of 16, German Tomas Klein won the bout, 10-2.

Marcel Miernik (Irvington, N.Y.), a 2010 Veteran World medalist, had fenced in a difficult pool and missed the cut after a 1-4 result.

Pernice fell to Margherita Camerin (ITA), 10-9, after a bye through the table of 32.

Bedrosian was stopped in the semifinals by Baerbel Gorius (GER) who won their bout, 6-1.

Ellen O’Leary (Decatur, Ga.), the reigning Veteran World Champion in the +70 saber event, was in contention for a second career foil medal at the Vet Worlds after a 10-2 win in the table of 16, but lost in the quarters to eventual champion Marie Demaille (FRA), 10-5.

Bettie Graham (Washington, D.C.) and Diane Reckling (White Plains, N.Y.) were each eliminated in the table of 16.

Fencing at his fifth Veteran World Championships, Drew Ridge (Warminster, Pa.) finished one touch away from winning a medal in the men’s 60-69 epee competition.

Ridge, a bronze medalist at the 2011 Veteran Worlds, finished the pools as the sixth-ranked fencer and earned a bye into the table of 32 where he defeated Aleksandar Anastasov (MKD), 10-6.

Ridge won his next bout over Daniel Feraud (ARG), 10-5, to advance to the quarter-finals where he fenced a close bout against Volker Fischer (GER), but lost by a single touch to Fischer who went on to win his fourth Veteran World title.

First-time Veteran World Team member Daryl Taylor (Los Angeles, Calif.) entered the table of 64 as the sixth seed and edged Ravil Zakirov (RUS), 9-8, in the table of 32. Taylor finished ninth after a 9-6 loss to Giuseppe Marino (ITA) in the table of 16.

Bob Cochrane (Lake Worth, Fla.) and Gary Linton (Venice, Fla.) were both eliminated in the table of 32.

A two-time Veteran World medalist, Cochrane was outtouched by Feraud, 10-9, after a first-round bye.