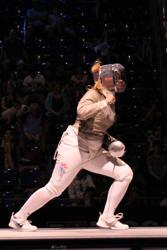 (Colorado Springs, Colo.) – In a field of young women’s saber fencers with their eyes on the Rio Olympic Games, many of the athletes at the November NAC had only seen London Olympian Dagmara Wozniak (Avenel, N.J.) fence on television.

Wozniak, a three-time Senior World Team medalist, has focused exclusively on international events since winning the silver medal at the 2011 National Championships.

But that changed on Sunday when Wozniak returned to the domestic circuit at the November North American Cup in Cleveland, Ohio.

Wozniak finished her pool undefeated to take the fourth seed in the Division I women’s saber table of 128.

Following her gold medal win in the junior event on Friday, Russo was up to the challenge of fencing one of the top 16 fencers in the world and nearly produced an upset, but Wozniak scored the final touch to take the bout, 15-14.

Wozniak controlled the final bout against Keehan and took the win, 15-7.

Yeisser Ramirez (Bronx, N.Y.) broke through the Division I men’s epee ranks at the January NAC in 2012 where he took silver and the 27-year-old returned to the finals on Sunday.

Seeded 22nd out of the pools, Ramirez earned a bye into the table of 128 where he defeated Richard Duval (Los Angeles, Calif.), 15-11.

Ramirez secured his position in the quarters after a 15-13 win over Keith Lichten (Oakland, Calif.) and a 15-11 victory against 2012 NCAA Champion Jonathan Yergler (Long Island City, N.Y.)

The gold medal came down to the final touch with Ramirez prevailing over Peregrine Badger (Providence, R.I.), 14-13.

In the gold medal final, the Fencer’s Club of Arizona team of Gabe Armijo (San Diego, Calif.), Donovan Deans (Chandler, Ariz.), Calvin Liang (Chandler, Ariz.) and Jose Gonzalez (PUR) won or tied six of the nine bouts, but could catch their opponents as the NYAC took the match by 10 touches and a score of 45-35.