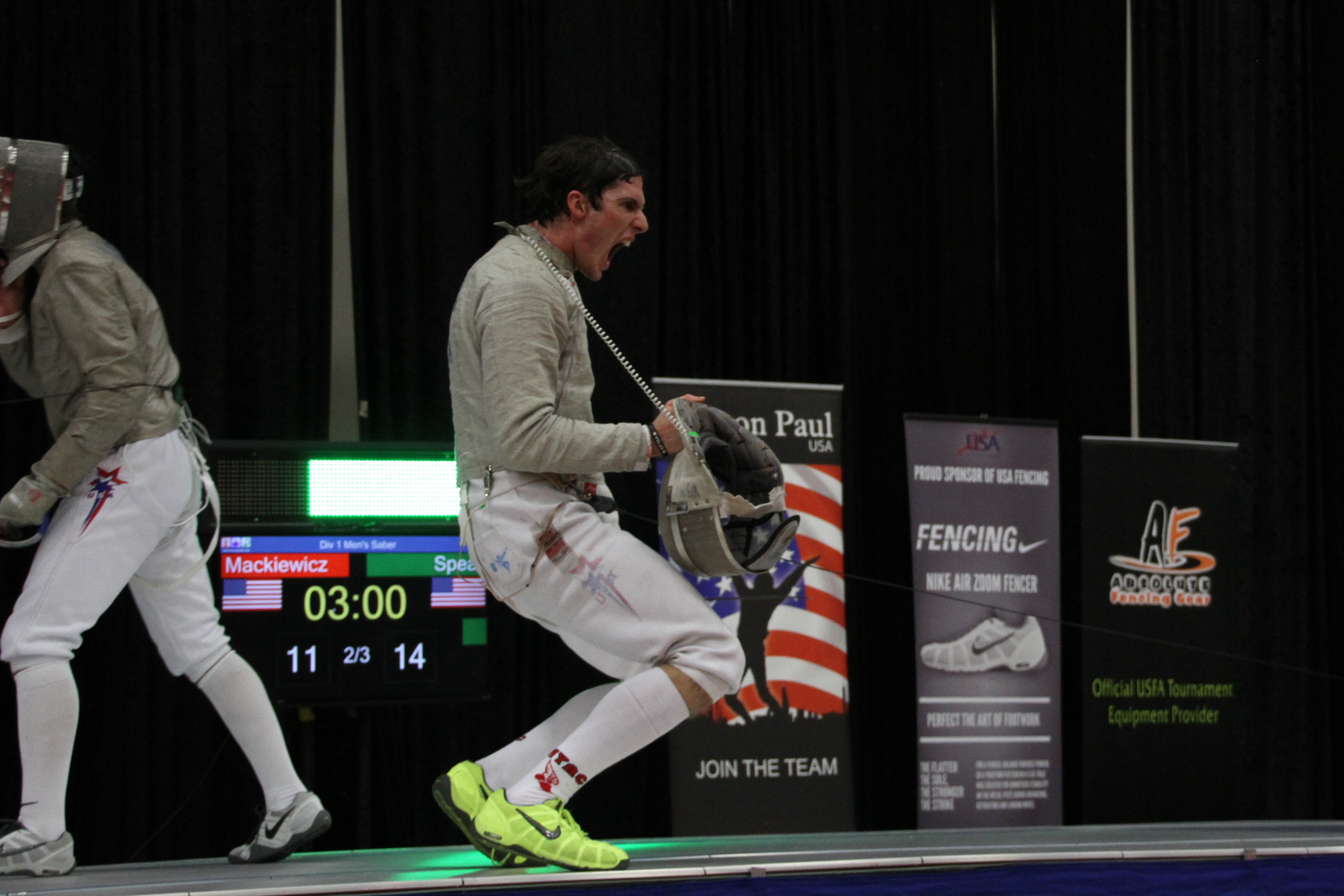 London Olympian Jeff Spear (Wynantskill, N.Y.) was the top men’s saber seed at the start of the tournament and retained that position after finishing 6-0 in the pools.

In the direct elimination table, Spear held his first three opponents to no more than seven touches each as he defeated Jonathan Lam (Woodcliff Lake, N.J.), 15-5, in the table of 64 and won his next two bouts by 15-7 scores against Mikheil Mardaleishvili (GEO) and Zackery Brown (Wachung, N.J.)

Spear ran into difficulties in the quarter-finals when he trailed Hector Florencia (MEX), 8-1, at the break, but two-time Senior World medalist Daria Schneider (New York City, N.Y.) was coaching Spear and helped him outscore Florencia, 14-4, in the second half.

“I got into a rut and let him go on an 8-1 run, deviating from my plan and playing into his strengths instead of mine.  Daria helped me get out of that one and back on track, and I think I really needed her in that moment,” Spear said.

Spear won his semifinal by a score of 15-10 against Andrew Fischl (Huntington, N.Y.) to advance to the gold medal final against 2012 Cadet World silver medalist Andrew Mackiewicz (Westwood, Mass.)

Mackiewicz built a 6-4 lead, but Spear scored four straight to end the first half and didn’t relinquish a lead in the second as he went on to win the bout, 15-11.

“I felt that at this NAC I fenced solidly but not spectacularly the whole day. It took me most of the first half of the final bout against Andrew to feel out how the various pieces needed to fit together,” Spear said. “But I'm excited to take this momentum to the World Cup season where my first set of goals is to make a top eight and make it back to top 24 in the world rankings.”

In the Division I women’s foil competition, three-time Junior World team medalist Jackie Dubrovich (Riverdale, N.J.) went undefeated in the pools and earned a bye into the table of 64 where she defeated Tanya Nelson (CAN), 15-4.

Dubrovich advanced to the quarter-finals after a 15-5 win over Isabella Chung (Greenwich, Conn.) and a 15-1 victory against 2013 Cadet World Team member Kate Northrop (Bridgewater, N.J.)

Dubrovich was up, 4-2, in the semis against 2012 Olympian Nicole Ross (New York City, N.Y.), but Ross scored four straight to take the score to 6-4. Ross continued to lead the bout, 9-7, after the first period, but Dubrovich went on a four-touch run to regain the lead at 11-9. Ross battled back to tie the bout at 12, but Dubrovich scored three of the next four touches to win the bout, 15-13, and advance to her first Division I gold medal final.

Margaret Lu (Greenwich, Conn.), Dubrovich’s teammate at Columbia as well as the last three Junior World Championships, led the final bout, 8-4, as the clock wound down in the second period. Dubrovich scored again in the final 10 seconds to cut Lu’s lead to three touches. Dubrovich scored the first three touches of the third period to tie the bout at eight and held a 10-9 lead before Lu scored again with 28 seconds remaining in the bout. Neither athlete scored before the regulation time ended and the bout was sent to overtime. Dubrovich needed just four seconds into the extra period to score the touch that would give her the gold medal by a score of 11-10.

“I’ve been super stressed with school and traveling, but I’m happy to have won,” Dubrovich said. “Margaret and I practice together a lot, obviously, but we both fence much more cautiously in competition and it was very intense.”

Women’s saber fencers Gabrielle Tartakovsky (Livingston, N.J.) and Riya Dave (Ardsley, N.Y.) were tied for the first seed out of the pools and both athletes advanced to the gold medal final.

While three-time Olympian Ann Marsh-Senic (Royal Oak, Mich.) stood on the Division I women’s foil podium to receive her bronze medal, her husband, Anatolie Senic (Royal Oak, Mich.) was on the finals strip fencing Vitaliy Boksiner (Forth Worth, Texas) for gold in the veteran 40-49 men’s foil competition. Senic won the bout, 10-3, to add a fourth medal to the family’s haul from the weekend after Marsh-Senic previously won gold medals in the veteran women’s 40-49 and open foil events.

The veteran open women’s epee competition came down to two athletes who had both won medals in the 40-49 epee event on Saturday. Ann Totemeier (Boulder, Colo.), a bronze medalist in the 40-49 event, won her first NAC title after she defeated Carola Schmid (Seattle, Wash.), 10-3, on the heels of Schmid’s gold medal win in the 40-49 competition.