Yeisser Ramirez celebrates his victory on the Division I men's epee podium. 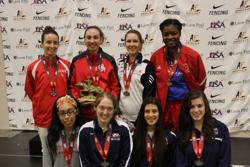 “There’s nothing worse than fencing your sister at a competition. It’s bittersweet also. I won, but it’s really upsetting fencing her,” said the elder Merza of her 15-12 victory.

In the quarter-finals, Merza drew Eliza Stone (Chicago, Ill.), a 2013 Senior World team bronze medalist and the No. 8-ranked fencer in the world whom had just defeated her U.S. teammate, Ibtihaj Muhammad (Maplewood, N.J.), 15-13, in the table of 16.

Merza got the bout off to a strong start with an 8-5 lead at the break, but Stone tied the bout at 10 in the second period and soon pulled away with a 13-11 lead. Merza stayed focused and scored four straight to win the bout, 15-13.

In the semifinals, Merza took an 8-4 lead over Loweye Diedro (Bronx, N.Y.) and controlled the second period for a 15-9 victory.

Merza got on a three-touch roll to start her final bout against two-time Senior World medalist Daria Schneider (New York City, N.Y.), but Schneider outscored Merza, 8-4, to hold an 8-7 lead at the break.

Schneider gained a 10-8 lead after scoring two of the next three touches. Merza fought back with four straight to take the score to 12-10. Merza went on to finish the bout, 15-11, to win her first Division I National Championship title.

“I just kept thinking of my ultimate goal which was to win. She’s a very strong fencer and I knew I couldn’t give her any breathing room. She’s really powerful and she knows how to take it back really quickly, so I knew I had to stay focused and finish it,” Merza said.

Although Merza upset two of the top women’s saber fencers in the world with her victories over Schneider and Stone, she said she doesn’t think about the experience level of her opponents on the strip.

“I don’t really get intimidated. I stay focused, but I came here today and I wanted to win. I respect them as fencers and they’re both very powerful fencers. I knew I had to put up my best competition against them and I’m really happy with my fencing and I’m happy with the way it ended,” Merza said.

In the Division I men’s epee competition, Yeisser Ramirez (Bronx, N.Y.) concluded a season that has included North American Cup gold and bronze medals with his first Division I National Championships.

In the quarters, Ramirez was tied with Jimmy Moody (Colorado Springs, Colo.) at 13 when Ramirez picked up two quick singles for a 15-13 win.

Ramirez and Alen Hadzic (New York, N.Y.) fenced a fast-paced semifinal bout that was tied at six after the first period and had Ramirez holding a 12-11 lead at the second break. Ramirez scored three singles during the first 30 seconds of the third period and Hadzic countered with one of his own to cut Ramirez’s lead to 14-12. Hadzic picked up an111other single, but Ramirez closed the bout out at 15-13.

Ramirez led the bout by a one-touch margin after the first period at 7-6, but gave up just one score on a double in the second as he racked up seven singles for a 15-7 victory.

“We know each other well. I fence at the Athletic Club three times a week, so I know his game,” Ramirez said of Watson. “I know if I attack, he’s got a great parry riposte, so I don’t want to get into that. He really had me tired, but finally I did it.”

The win follows a silver medal finish in the senior team event on Friday for Ramirez who anchored his Peter Westbrook Foundation team its podium finish behind the New York Athletic Club.

“It feels so good. I’ve been working really really hard for this time. Yesterday, we missed by just one point in team, so I knew I had to win today,” Ramirez said.

Although Ramirez has won three individual medals at North American Cups, the National Championship title was high on his list of goals.

“Peter’s always like ‘National Champion is different because your name is now written in the book’” said Ramirez who not only wanted to take the title, but leave no questions behind. “I was thinking that it’s not about winning, it’s about dominating and I did it.”

Ramirez’s PWF teammates celebrated the victory on the strip after cheering him on bout by bout.

“The support that we have, you don’t see that anywhere else. Nobody cheers for you like Peter. It feeds you. They’re like ‘C’mon, let’s go!’ and they know that when they cheer for me it gets me really pumped up. It makes you feel special and today’s win is dedicated to them,” Ramirez said.

London Paralympian Cat Bouwkamp (Fishers, Ind.) and Catherine Thomas (Atlanta, Ga.) fenced in the finals for the second time this weekend. Bouwkamp, who won their epee final on Friday, took the foil title, 15-9.

Competition also was held in Minneapolis in non-championship events at the April North American Cup.

Featuring  both age group and open veteran events, the April NAC is the second of three qualifying events for the 2014 Veteran World Championship Team.

Elizabeth Kocab (Farmington Hills, Mich.) qualified for her fourth straight Veteran World Team with her victory in the 60-69 women’s epee event. The reigning Veteran World Champion won the December NAC and added a second NAC title after she defeated her Veteran World teammate, Diane Kallus (Round Rock, Texas), in the gold medal final.

Veteran men’s foil fencer Peter Grandbois (Granville, Ohio) continued his unbeaten run as a first-year athlete in the 50-59 category. Grandbois’s win over two-time Veteran World team member Jamie Douraghy (Los Angeles, Calif.) in the finals which puts Grandbois at the top of the Veteran World Team standings for the 2014 squad.

After taking top-eight finishes as both a veteran 50-59 and open epee fencer at the December NAC, Cristina Ford (Salem, Ore.) returned to the top of the podium in Minneapolis where the 2013 Veteran World team member defeated Diane Trice (Silver Spring, Md.), 10-5, in the final bout.

In a battle of the former Veteran World teammates, Davis Carvey Seattle, Wash.) came out on top with a final bout win against Peter Calderon (Plainsboro, N.J.), 8-3.

Four veteran competitions were held in events which aren’t on the Veteran World program.

In a rematch of their veteran open epee final at the December NAC, Sandra Marchant (Prospect, Conn.) earned a come-from-behind win against Ann Totemeier (Boulder, Colo.), 10-9, to win her first NAC gold in the 40-49 epee event.

The veteran men’s saber team gold medal came down to the final bout between Fencers Club of Arizona and AMR. Down by just a touch going into the final bout, AMR’s Oleg Stetsiv (Staten Island, N.Y.) outscored 2012 Veteran World Champion Will Milne (Redwood City, Calif.), 6-2, to anchor his team to a 45-42 victory.

In the Division II men’s saber event, Eric Pei (Saratoga, Calif.) won his second NAC title of the season when he defeated Frederick Breslow (Appleton, Wis.), 15-10, in the final bout.