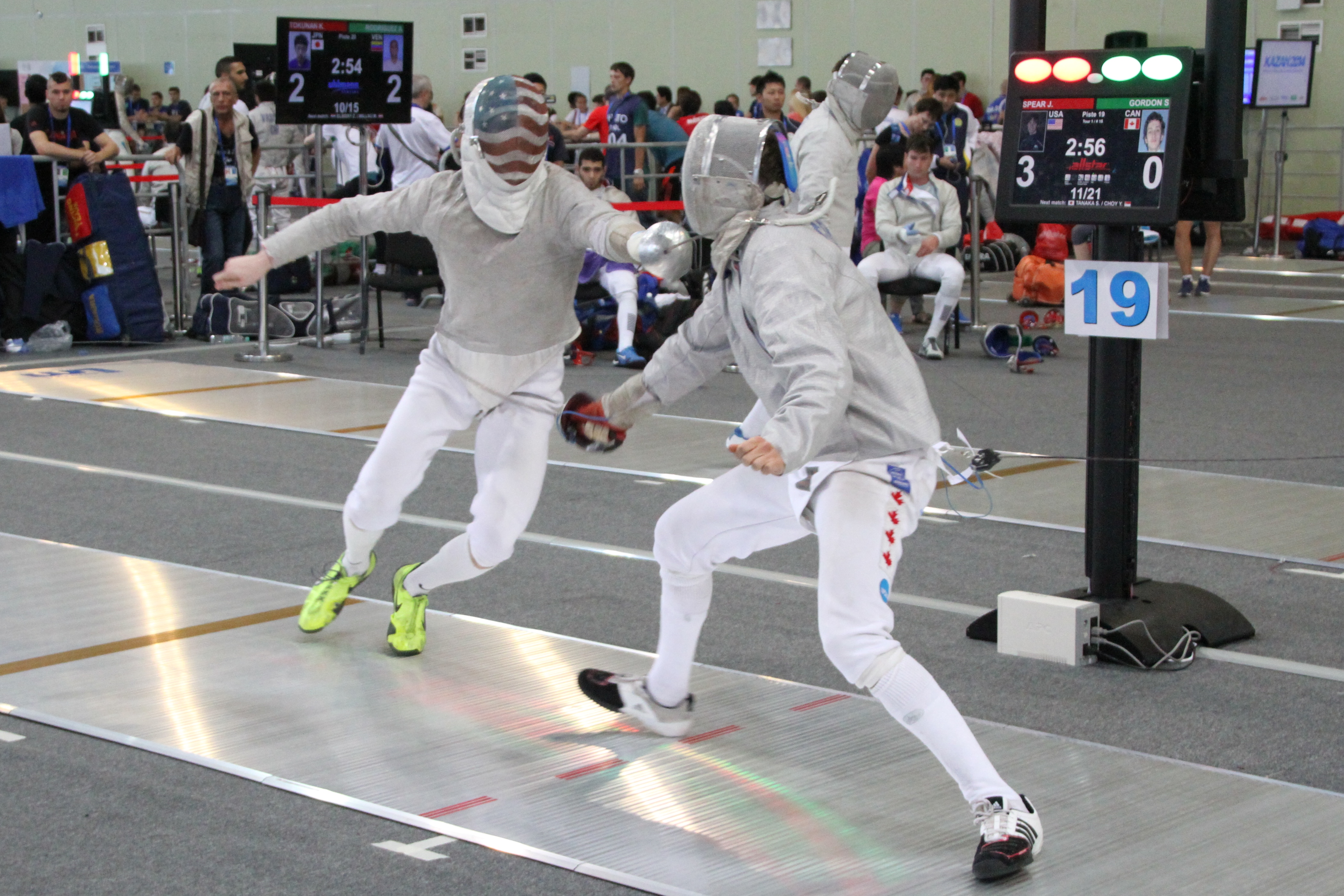 (Kazan, Russia) – Team USA will be represented by a full contingent of four fencers in the men’s saber table of 64 at the Senior World Championships on Friday after Jeff Spear (Wynantskill, N.Y.), Eli Dershwitz (Sherborn, Mass.) and Ben Igoe (Staten Island, N.Y.) all advanced out of the preliminary rounds on Tuesday.

The trio will join London Olympian Daryl Homer (Bronx, N.Y.) who was exempt from the preliminary rounds due to his No. 12 world ranking.

Spear, one of Homer’s teammates at the 2012 Games, came out with a three-touch deficit against Mikolaj Grzegorek (POL), but fought his way back to tie the bout at four before giving up the final touch.

“I basically gave him three touches right off the bat and then fenced alright and tied the score, but then he scored the last one. It was really just a huge mental lapse,” Spear said.

After a 5-1 win over Jose Ricardo Chafloque Alvan (PER) and a 5-3 victory against Shun Tanaka (JPN), Spear shut out two-time All-American Shaul Gordon (CAN), 5-0.

“I had a very specific plan going to into my bout with Shaul and it helped me focus a little bit,” Spear said. “I didn’t really have a plan against the Polish fencer and I wasn’t confident in what I was doing, but I had a very definite plan against Shaul and I executed it well and was very pumped up for that bout.”

Spear kept the momentum going and finished his pool on a strong note with a pair of 5-2 wins against Yu Yong Choy (SIN) and Alin Badea (ROU) – the fencer who bested Spear in the table of 64 last year.

“I’m not quite as starstruck as I was last year. Even having been to the Olympics, last year was my first Senior Worlds as an individual and I think this time I wasn’t quite as uptight as I was last year,” Spear said. “I feel like I was a lot more prepared for that this year. I started off that way this year, being nervous and uptight, but, because of my experience last year, I was able to adjust.”

Spear’s 5-1 record earned him a top-16 ranking after the pool rounds which means he will fence in the table of 64 as the 26th seed.

“I’m looking forward to it. I just need to have a plan,” Spear said. “I think that if I fence as well as I did in the second part of this pool, it will be a really good day.”

Dershwitz, a three-time Junior World medalist, made his Senior Worlds debut as a 17-year-old in 2013 where he placed 36th after a 6-0 finish in the pools.

This time, Dershwitz started the pools with a 5-3 loss in his opening bout to Willian Zeytounlian (BRA).

“We had to get to the strip 20 minutes early and I was the first bout, so I wasn’t cold, per se, but my brain was a little off and I wasn’t really sharp to start off with. I wasn’t fencing clean and it was a very scrappy bout. I had to get a few slaps in after that to wake me up,” said Dershwitz who will be starting at Harvard in the fall.

“I really woke up after that first bout. I remembered last year when I fenced really well in pools and had a good seeding for Day 2 and I just wanted to finish strong and fence smart. I knew if I fenced smart then I’d start getting touches,” Dershwitz said. “I started off the day a little slow. But, after that, I started to fence a lot better, so that’s a good way to finish Day 1 and move on to Day 2.”

Three-time Senior World Team member Ben Igoe (Staten Island, N.Y.) also got off to a tough start with a 5-3 loss to Sandro Bazadze (GEO) in the first pool round.

Igoe won his next bout over Xin Fang (CHN), 5-2, and defeated Maxence Lambert (FRA), 5-1, in the third round. After a 5-0 win against Evgeniy Konovalov (UZB), Igoe lost his final bout of the day to James Honeybone (GBR).

After a bye into the preliminary table of 64, Igoe trailed Ciprian Galatanu (ROU), 8-5, going into the second half where he scored 10 touches to win the bout, 15-13.

“I’ve fenced him before in pools and at training camps. I kind of know how he fences and I got a lot of advice from Daryl which helped out a lot, actually,” Igoe said. “And just knowing the way the Romanians fence in general also kind of gave me some framework on how to approach it.”

All four U.S. women’s saber fencers were exempt from the pools and preliminary rounds on Tuesday due to their top 16 world rankings.

The table of 64 through the quarter-finals will be shown live at http://www.youtube.com/user/FIEvideo.