Kocab and Radle Win Gold and Bronze at Veteran Worlds 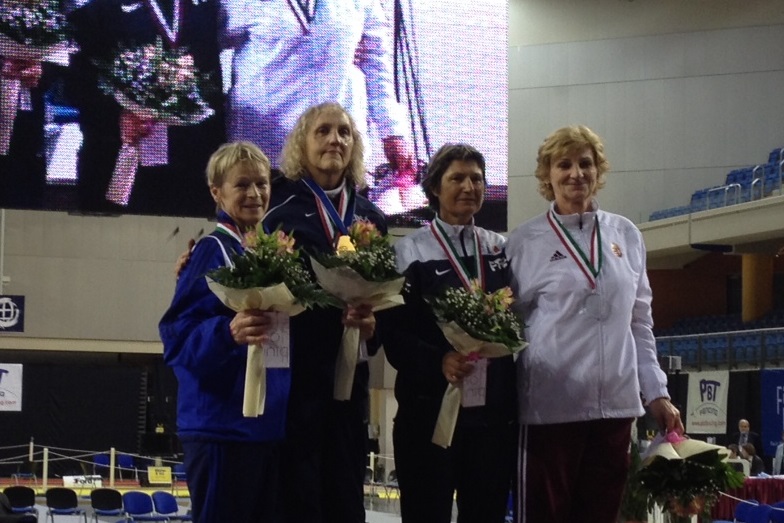 Fencing in the 60-69 women’s epee event, Kocab won her third Veteran World Championship title. Kocab is now one of just four U.S. fencers ever to win three Vet World golds and the only epee fencer to have achieved the feat.

Kocab, who won her first two Veteran World titles in 2011 and 2013, came out of the pools as the top seed after holding four of her five opponents to one touch each.

In the gold medal final, Kocab fenced Marja-Liisa Someroja (FIN) in a rematch of their 2013 semi.

Kocab scored first late in the opening minute and a passivity call was awarded when neither athlete posted a touch during the following minute.

The bout advanced directly to the second and final period. Kocab scored again 54 seconds into the period, but Someroja answered with two singles to tie the bout.

In an action-packed final minute, Kocab scored eight touches in 39 seconds to win the bout, 10-5.

Six-time Veteran World medalist Diane Kallus (Round Rock, Texas) won her first direct elimination bout in the 60-69 epee event by a score of 10-4, against Sania Yakovleva (RUS), but lost in the 16 to Hoffmann, 10-6.

Jann Ream (Iowa City, Iowa), a 2004 Vet World bronze medalist, came one pool bout short of qualifying for the table of 32, but was eliminated with a 1-4 record.

Fencing in the +70 women’s epee event, Radle arrived in Hungary with just one appearance at a past Vet Worlds to her credit, but she made a statement with her bronze medal finish.

Radle defeated six-time Veteran World medalist Barbel Gorius (GER), 10-8, to advance to the semifinals where she would face Brigitte Greunke (GER) – a legend in the sport who has won 17 Veteran World medals across all three weapons, including 12 golds.

Radle lost the bout, 10-5, and finished the day with a bronze medal.

Bettie Graham (Washington, D.C.), a 2011 Veteran World medalist, missed a chance to return to the podium when she was eliminated after the pool rounds. First-time team member Sally Higgins (Tinton Falls, N.J.) also missed the cut.

Pavlovich went undefeated in the pools and earned a bye into the table of 32 as the fourth seed.

With a medal on the line, Pavlovich fenced Peter Marduchajew (GER) in the quarters, but lost the bout, 10-6.

Ray Sexton III (Round Rock, Texas) fenced in the +70 foil competition on Tuesday and returned to the strip less than 24 hours later for the saber event.

The 10-time Vet World medalist came out of the pools as the fourth seed and earned a bye into the table of 16 where he defeated Alain Sarfati (FRA), 10-4.

Lucas Dobrzanski (Bakersfield, Calif.) and Thomas Fischer (Raytown, Mo.) were both eliminated in the pool rounds.