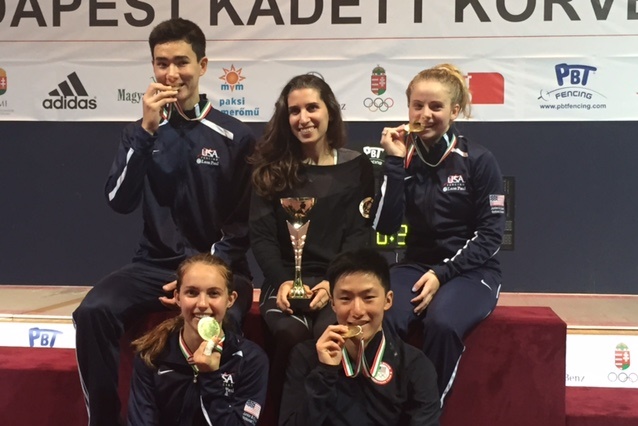 All four athletes went 4-0 in the pools and earned byes into the table of 128.

Elizondo held her first three direct elimination opponents to single digits scores to advance to the table of 16 after a pair of 15-8 wins against Daniyela Tovtyn (UKR) and Cynthia Liu (CAN) as well as a 15-6 victory over teammate Marissa Viqueira (Maplewood, N.J.) in the 32.

Elizondo defeated Rebeca Candescu (ROU), 14-9, to secure a medal and a berth in the semifinals where she would face Zhou who was coming off a 15-8 win over top seed Anna Tarenenko (UKR).

Binder, a 2015 Cadet World bronze medalist, won her quarter bout against Anna Zuin (ITA), 12-5, and would fence Devore in the semis after Devore defeated Minarik, 15-9.

Elizondo and Binder each controlled their semifinals as Elizondo won her bout against Zhou, 15-10, and Binder bested Devore, 15-9.

Elizondo claimed her first international gold medal after defeating Binder, 15-13, in the final bout to climb to No. 6 in the Cadet National Point Standings. Binder remains No. 1 in the national standings and moved from No. 8 to No. 4 in the Cadet European Standings.

Itkin and Tourette each posted undefeated records as two of 10 U.S. fencers to achieve the feat out of the pool rounds.

Both Itkin and Tourette would face teammates in the round of eight as well with Itkin defeating Cameron Allen (Newtown, Pa.), 15-12, and Tourette besting Michael Li (Palo Alto, Calif.), 15-4.

The Americans each faced Russian opponents in the semis where Itkin won his bout against Kirill Borodachev, 15-13, and Tourette defeated Danil Gainullin, 15-12.

In the final, Itkin came out on top with a 15-13 win over Tourette.

After a bye into the table of 16, Team USA shut out Turos for four of the eight bouts with Binder anchoring the team to a 40-12 victory.

In the quarter-finals, Team USA took on a mixed team with athletes from Russia, Serbia and Latvia. Team USA dropped just one bout and went on to take the match, 40-23.

The Americans dominated the semifinals as well, winning seven of eight bouts to defeat Ukraine 1, 40-23.

The gold medal match would prove to be a challenging one for both Team USA and Russia 1 with the Russians winning four bouts to hold a one-touch lead at 34-33 going into Binder’s anchor bout against Anastasia Karpacheva. Binder took the bout by a 7-3 score and the gold medal with a 40-37 win.