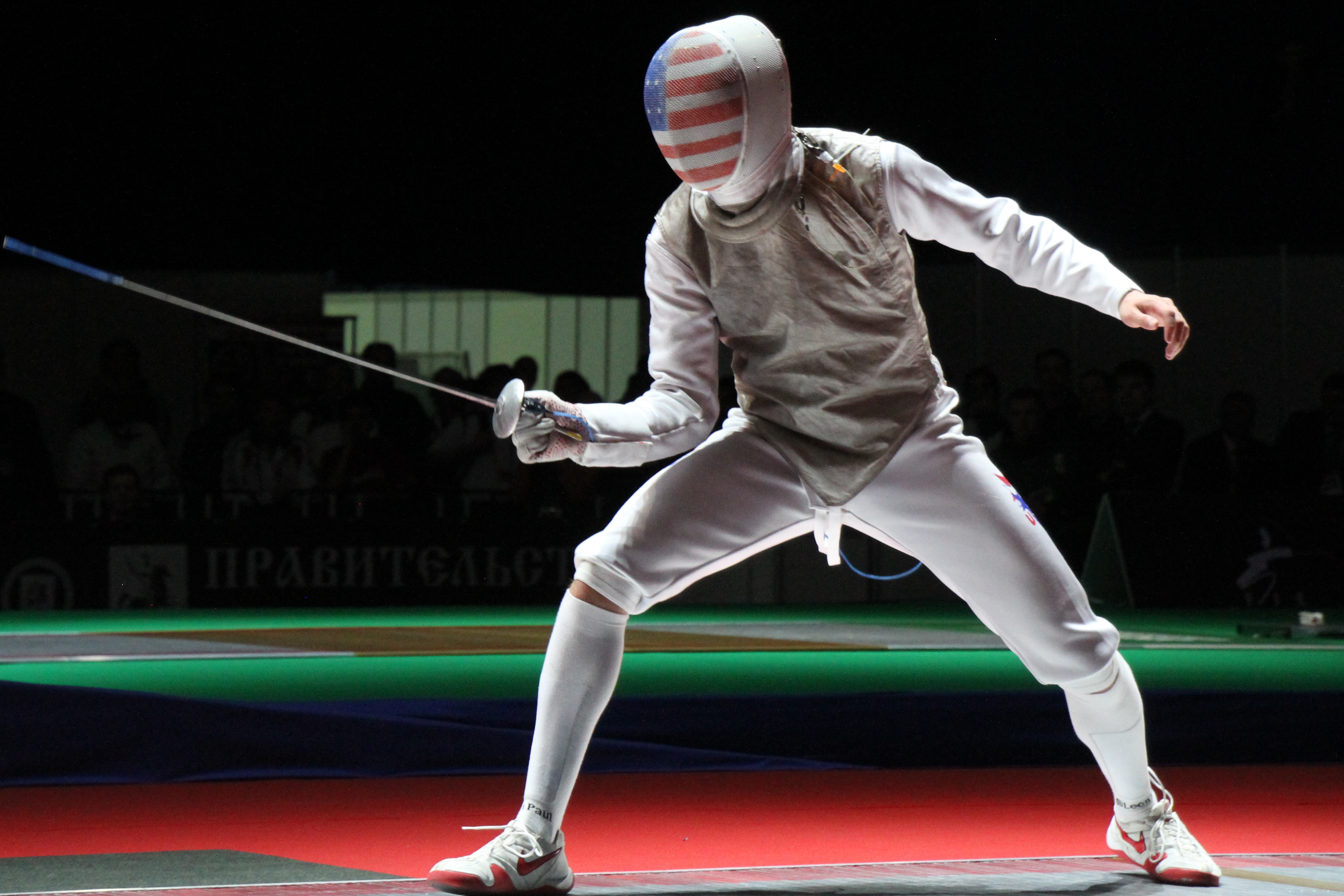 Alexander Massialas, the No. 1 men's foil fencer in the world, will headline the field in St. Louis. Photo Credit: Nicole Jomantas

(Colorado Springs, Colo.) – The third and final Division I North American Cup of the 2015-16 season will be held from Jan. 8-11 at the America’s Center Convention Complex in St. Louis.

Featuring nearly 2,000 competitors, the event will have Olympic implications for athletes in the Division I men’s foil, men’s and women’s epee and women’s saber events as the NAC is one of the tournaments that will be used as part of the qualification process for the 2016 Rio Olympic Games.

The following Olympic and Senior World Championship medalists are scheduled to compete in St. Louis:

While the women’s foil and men’s saber slots for the 2016 Olympic Games are being allocated based on international results only, the January NAC is a key component of qualification for the men’s foil, men’s and women’s epee and women’s saber events. Provided the United States qualifies a team for Rio in each of these events, the top three athletes in the USA Fencing National Team Point Standings at the conclusion of the Division I National Championships (April 8-11 in Richmond, Va.) will earn berths on the team. The fourth athlete will qualify to travel to Rio as a replacement athlete for the team event only.

The following is a look at the athletes looking to come one step closer to Rio with a win in St. Louis:

Men’s Foil
The competition for the three individual spots remains the toughest in the men’s foil field as the top four fencers in the nation have each either held the No. 1 ranking in the world or won the individual Senior World Championships title.

As the reigning Senior World silver medalist and current World No. 1, Alexander Massialas (San Francisco, Calif.) holds the top position in the Team Point Standings currently, but he is looking to bolster that ranking with a podium finish in St. Louis. Massialas has only fenced in one NAC this season which gives him an advantage as athlete may count a maximum of two NAC results in their rankings. Massialas, who won gold at the Tokyo World Cup in November, placed second at the December NAC behind his 2012 Olympic teammate Race Imboden (Brooklyn, N.Y.) who also was fencing in his first NAC of the season. Although Imboden won the 2014-15 Overall World Cup title, a loss in the table of 16 at the Senior Worlds means he currently sits in third place in the National Team Standings behind Massialas and three-time Senior World medalist Gerek Meinhardt (San Francisco, Calif.) Ranked No. 2 in the nation, Meinhardt has nearly maxed out his NAC points after a gold medal win in October and a bronze at the July Challenge and will be focusing on training for the Paris World Cup next week. Miles Chamley-Watson (New York City, N.Y.), the 2013 Senior World Champion is in a close contest with Imboden who he is seeking to pass in the standings after this weekend after an early loss at the December NAC left him off the medal stand. Imboden and Chamley-Watson are separated by just over 300 points with a gold medal in St. Louis being worth 1,000.

Women’s Saber
Although two-time Olympic Champion Mariel Zagunis (Beaverton, Ore.) and 2012 Olympian Dagmara Wozniak (Avenel, N.J.) won’t be in attendance in St. Louis, the competition remains fierce for positions on the team for Rio. Ibtihaj Muhammad (Maplewood, N.J.) just missed qualification for the 2012 Games and is currently ranked third in the point standings behind Zagunis and Wozniak as she seeks to become the first U.S. athlete to compete in a hijab at the Olympic Games. Muhammad sits just 36 points behind Wozniak in the standings and will move up to No. 2 as long as she places 23rd or higher in St. Louis. The contest for the fourth (replacement athlete) position in Rio remains tight as well with four-time Junior World medalist Sage Palmedo (Portland, Ore.) recently passing 2014 Senior World Team Champion Eliza Stone (Chicago, Ill.) to move from fifth to fourth after her top-64 result at the Absolute Fencing Gear® FIE Grand Prix Boston and gold medal win at the December NAC last month. Palmedo holds a 44-point lead with 2,218 points to Stone’s 2,174 and whichever athlete places higher in St. Louis is likely to become No. 4 in the rankings.

Women’s Epee
The top three positions in the standings have remained consistent over the last two seasons with London Olympic team bronze medalists Courtney and Kelley Hurley (San Antonio, Texas) currently sitting in the No. 1 and No. 2 positions and three-time Senior World Team member Katharine Holmes (Washington, D.C.) in the third spot. Katarzyna Trzopek (Pacifica, Calif.), a former Junior National Team member for Poland, is 2,325 points back in fourth, but is keeping the pressure on her 2015 Senior World teammates as both the NAC and the Division I Nationals are worth 1,000 points each and there are still three remaining international qualifiers with a max value of 2,400 points each.

Men’s Epee
With three members of the 2015 Senior World Team competing at a satellite tournament in Stockholm, both the gold and the 1,000 points towards potential Olympic qualification are up for grabs with 2013 Senior World Team member Alex Tsinis (Little Neck, N.Y.) entering the event as the No. 2 fencer in the National Team Point Standings after his gold medal win at the December NAC in Baltimore. Nine of the top 10 fencers in the standings are all within 500 points of each other, however, and the nearly 300 person entry list will also include 2015 Senior World Team members Jimmy Moody (Colorado Springs, Colo.) and Ari Simmons (Bellaire, Texas).

In addition to Division I competition, athletes also will fence in junior (U20), senior team and wheelchair events with the junior events serving as part of the qualifying process for the 2016 Junior and Cadet World Championships in March.

Although qualification for the 2016 Paralympic Games is done by name based on international results, many of the top Paralympic hopefuls will be fencing in Rio, including five-time Paralympian Curtis Lovejoy (College Park, Ga.), four-time Paralympian Gerard Moreno (Los Angeles, Calif.) and 2015 Wheelchair World Team member Ellen Geddes (Johnston, S.C.)

Competition schedule is as follows (Note: All times are approximate start times and rounds continue through completion of finals):