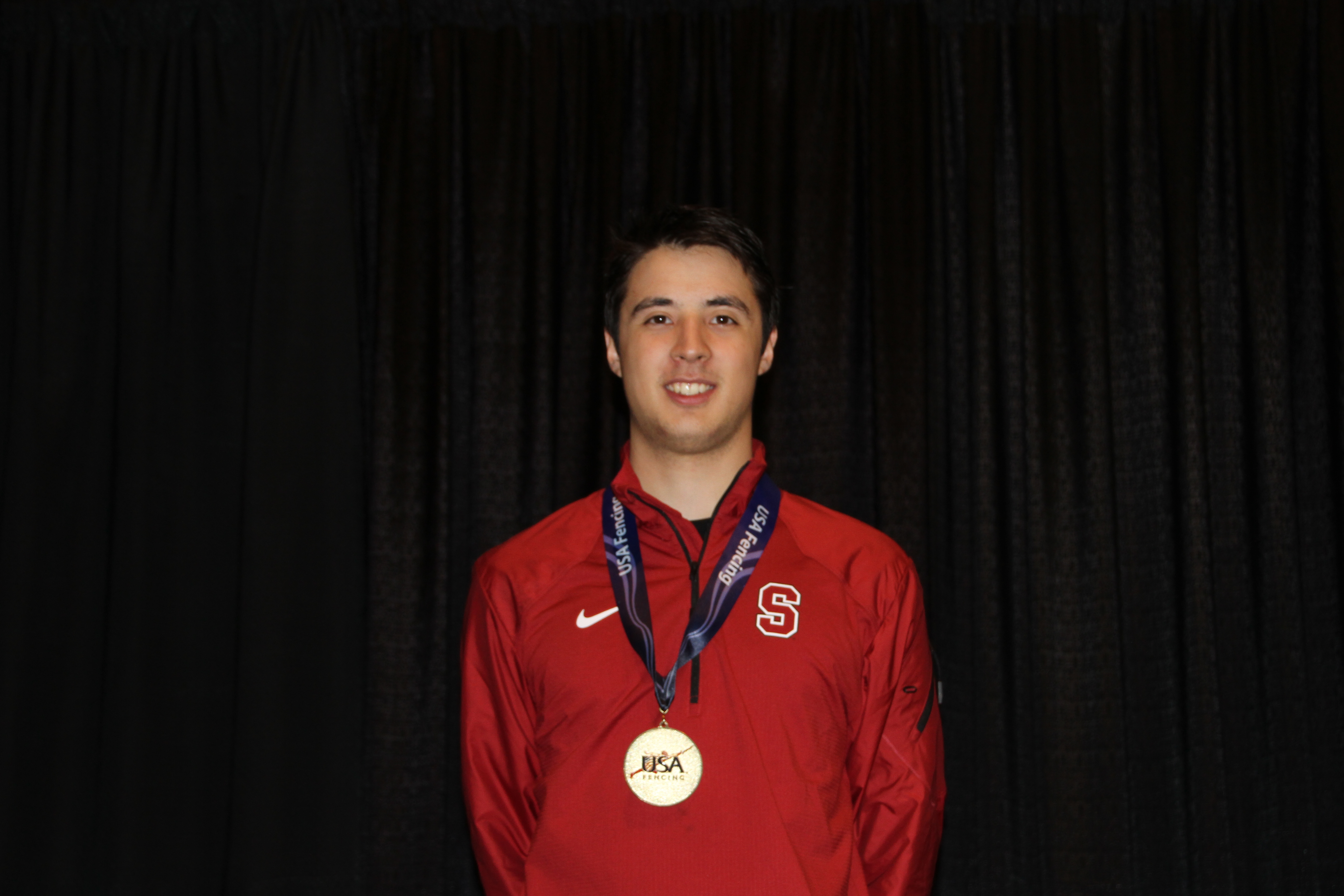 (St. Louis, Mo.) – London Olympian Alexander Massialas (San Francisco, Calif.) ended the January North American Cup the way he began it – as the No. 1 fencer in both the world and the U.S. rankings.

Fencing in the penultimate domestic qualifying event for the Rio Olympic Games, Massialas and his 2012 Olympic teammates, Miles Chamley-Watson (New York City, N.Y.) and Race Imboden (Brooklyn, N.Y.) traveled to St. Louis for the final Division I NAC of the season to earn Olympic qualifying points prior to departing for the Paris World Cup on Wednesday.

Seeded second out of the pools, Massialas only gave up seven touches in six pool bouts to come away with a tied No. 2 seed in the direct elimination rounds. While both Chamley-Watson and Imboden also went undefeated, Imboden found himself tied for eighth which put him in the same quadrant as Massialas for a potential quarter-final matchup.

Massialas faced few challenges in the early rounds as he won each of his first four bouts decisively, beating William Taquet (Dallas, Texas), 15-3, in the 128 and following with wins against Pierre-Olivier Bontems (CAN) and David Kong II (Rutherford, N.J.) by 15-5 margins. Massialas shut out Duncan Rheingans-Yoo (Watertown, Mass.), 15-0, in the table of 16 to move on to the quarters after Imboden escaped the 16 with a 15-14 win against his former teammate and 2011 Junior World Team Champion Brian Kaneshige (Maplewood, N.J.)

Although Massialas jumped out to a 3-0 lead, Imboden reeled him back in to take a 7-4 lead and held on by a touch at the break for 9-8. In the second period, Massialas went on a five-touch run and ended the bout with a 15-11 win.

“I just changed my game plan up a little bit, tightened up little things I was doing wrong. I felt like I was making a few minor mistakes, whether it be going too quickly or having too big of steps or not executing properly. It was mostly about tightening up little things and then throwing in a few new things too. You’re always making changes in fencing. Especially with high level fencers, it’s about who made the last change at the right time,” said Massialas who lost to Imboden, 15-14, in the final of the December NAC. “It was great to come out here and prove myself and have a good rematch in the top eight. I wish we could have fenced later, but that’s the thing with these national tournaments is you never know where you’re going to end up ranked after pools with so many people.”

In the semifinals, Massialas met 2015 Cadet World medalist Geoffrey Tourette (Cupertino, Calif.) While Tourette held the bout at a 2-2 tie early in the first period, Massialas reeled off nine straight and went on to win the bout, 15-4.

On the other side of the bracket, Chamley-Watson cruised through his first six bouts, giving up no more than eight touches to any opponent as he closed in on the ultimate goal of passing Imboden in the team point standings. At the start of the event, Imboden was ranked third in the National Team Point Standings which will be used to select the U.S. Olympic Fencing Team with the top three in the standings after the Division I National Championships are held in April. In addition, the fourth ranked athlete will be selected to travel to Rio as the replacement athlete for the team event only.

Chamley-Watson qualifying for the gold medal final allowed him to move up to the No. 3 position in the standings with less than 100 points separating him and Imboden and four events, including three international tournaments, remaining in the qualification period.

Again, the first three touches of the final bout would go to Massialas with Chamley-Watson scoring three of his own for a tie. Massialas regained his lead and Chamley-Watson couldn’t catch his teammate who went on to take the bout, 15-10.

“It’s always important to come out to these NACs. We need two national results every year and my first one was last month in Baltimore and I fenced off with Race in the gold medal match, 15-14. It didn’t go my way that time, and then here I tried my best to win all my bouts,” Massialas said. “Just fence. That’s my mindset when I fence anyone. I don’t care if they’re ranked higher or considered better. I just want to go out there and win and that’s my mindset. Sometimes it’s also ‘don’t lose’ and sometimes my hate of losing supersedes my love of winning which may be a good thing or a bad thing, but I try my best to just go out and take it one bout at a time and Miles was just another bout and I’ve fenced him so many times over the years, whether it be internationally or nationally or at camps, it really doesn’t change. The same with Race and Gerek and it’s any of us can win on any day. I think all of us have proven that over the course of the last four years.”

Although Massialas’s focus has been on the World Cup circuit, he said he always enjoys fencing up-and-coming athletes at the NACs.

“Fencing Geoffrey and Rheinigans-Yoo and all of those guys, it’s good to see the next generation of fencers. I think Race and I have been out of the younger game for a while and we don’t get a lot of chances to fence these younger fencers other than the ones that go to our own clubs and I think it’s a really great opportunity for us to see how they’re doing and give them some pointers, but also for them to see us,” Massialas said who also offered some advice to his opponents. “Over the last two tournaments, I’ve fenced a plethora of different juniors and the one thing I’ve noticed is that they’re all super eager to go, go, go and it’s either 100% or 0%, so the one thing I’d say is that we may be ‘the big guys,’ but fence us like anyone else and you’ll probably have a better opportunity at beating us. We take things slow, we like to work things out and that’s ultimately what fencing is. It’s about working out your opponent and seeing what they’re doing and if you’re only going at 100% speed or zero, there’s not as much to work with. But that will come with more time and more experience.”

Massialas’s gold medal win allowed him to both retain his No. 1 position in the United States and increase the point margin between himself and Meinhardt who is ranked second, but the Olympian maintains that he doesn’t pay attention to rankings – either domestically or internationally.

“I don’t look at the U.S. standings almost ever and I rarely look at the FIE standings. The last time I did was when we were in Tokyo and I won and someone said I was number one and I said ‘I don’t believe you’ and then I went to check and was like ‘Oh, that’s good I guess,’” Massialas said. “It’s good to be able to say I was No. 1 in the world at one point in time, but it’s all about not easing off the pedal and it doesn’t mean I get to take things any easier and it doesn’t mean anything until I win the gold medal in Rio and hopefully two. And then maybe the number one ranking after that, but right now that’s not really where my mind’s at. I’m just focused on a) qualifying for Rio in an individual spot and then b) doing the best that I can once we get there and we’ll see where the pieces fall after that.”

In the wheelchair events, two-time Wheelchair World Champion Tareq Alqallaf (KUW) continued his eight-year NAC winning streak with a victory in the men’s epee event where he defeated Andrew Quattrociocchi (Kennesaw, Ga.), 15-1, in the finals.

Jonah Shainberg (Rye, N.Y.), a 2015 Junior World team bronze medalist, won his second North American Cup of the season with a gold in the junior men’s saber competition after his Div I title win in October. Shainberg defeated Mikolaj Bak (Linden, N.J.), 15-11, in the semifinals.

In the gold medal final, Shainberg faced Ben Natanzon (Manalapan, N.J.) who is currently the No. 1 junior men’s saber fencer in the world. Holding an 8-4 lead at the break, Shainberg scored five straight in the second period before Natanzon was able to regroup, picking up six of the next seven touches. Shainberg took the final score to win the bout, 15-10.

Nixon defeated 2014 Junior World team medalist Amanda Sirico (Bowie, Md.), 15-8, in the semis and went on to face Alexanne Verret (CAN) for gold. Up by two touches at 4-2 in the first, Nixon’s lead grew to 11-6 at the second break. The Canadian scored five touches in the third, but couldn’t catch Nixon who took the bout, 15-11.