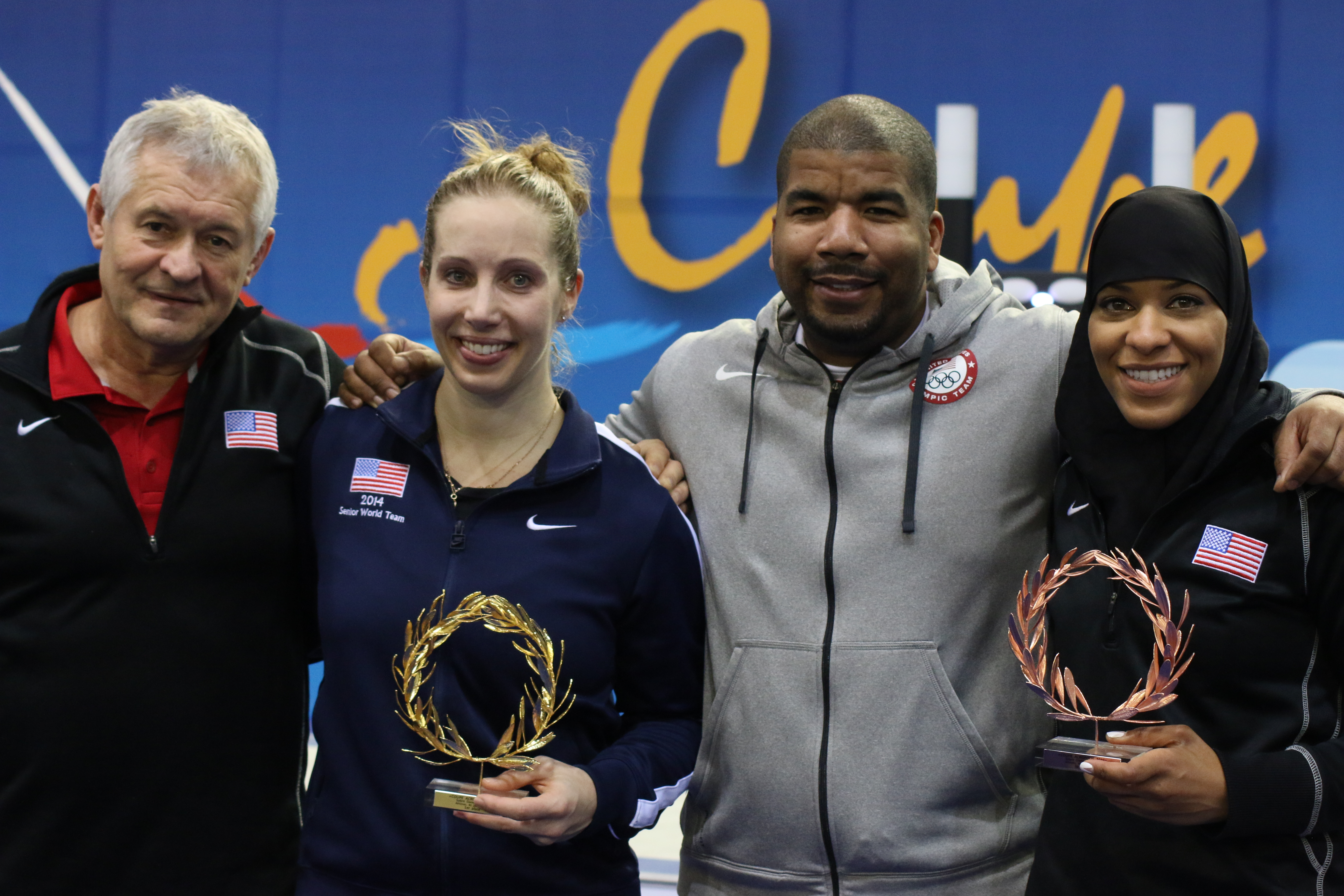 During the 12 years since Zagunis made headlines as the 19-year-old who would take home the first Olympic gold for an American in 100 years, she has transitioned from an up-and-comer to the most decorated fencer in U.S. history.

Since the 2004 Olympic Games, Zagunis won a second gold in Beijing and claimed four titles (two each in individual and team), but the magic of Athens remained for Zagunis on Saturday as she won her second World Cup title of the season and stood on the podium with teammate Ibtihaj Muhammad (Maplewood, N.J.) who took bronze.

The podium finishes not only allowed both athletes to bring home medals, but Zagunis and Muhammad each earned enough Olympic qualifying points on the USA Fencing National Team Point Standings to secure their positions at the 2016 Olympic Games in Rio de Janeiro. With more than three months remaining in the qualifying period before the team is formally named on April 11 at the USA Fencing Division I National Championships in Richmond, Zagunis and Muhammad will remain ranked in the top two in the standings with the top three athletes earning positions in the individual and team events in Rio for women’s saber. A fourth athlete will travel to Rio as a replacement fencer for the team event only.

Ranked third in the world at the start of the Athens World Cup, Zagunis dominated her table of 64 bout against Risa Takashima (JPN), 15-3, and defeated Jisu Yoon (KOR), 15-11.

Fencing hometown favorite Vassiliki Vougiouka (GRE) in the table of 16, Zagunis advanced to the quarter-finals with a 15-12 victory.

In the quarters, Zagunis found herself down by two touches at 8-6 after the first period against four-time Senior World medalist Cecilia Berder (FRA). Zagunis tied the score at 12 and went on to take two the final two touches to close the bout, 15-14, and guarantee herself a podium finish.

Muhammad entered the semis on the heels of one of her best days of fencing on the circuit with wins against a series of World and Olympic medalists.

After a 15-8 win against Yaqi Shao (CHN) in the 16, Muhammad drew Olga Kharlan (UKR), a four-time Senior World Champion and 2012 Olympic bronze medalist. With Kharlan holding a single-touch lead at 8-7 at the break, Muhammad outscored Kharlan, 8-4, in the second to earn an upset that would give Muhammad a medal while Kharlan moved down from No. 2 to No. 3 in the world rankings.

The semis would be the second time Muhammad and Zagunis would meet on the international stage during the last year. While Muhammad won their semifinal at the Seoul Grand Prix last March, Zagunis looked virtually unstoppable in the first period, giving up just one touch for an 8-1 lead. Zagunis controlled the second half as well to finish the bout, 15-6.

Zagunis would fence rival Sofya Velikaya (RUS), the reigning Senior World Champion and World No. 1, in the gold medal final. Fencing each other for the first time in an individual event this year, Velikaya took an 8-5 lead at the break before Zagunis adjusted and went on a 7-3 run in the second period to win the bout, 15-11. In addition to winning gold, Zagunis also regained her position as the No. 2 fencer in the world, passing Kharlan and holding Velikaya firmly in her sights with five tournaments remaining that will count towards the seeding used in Rio.

During the medal ceremony, Zagunis dedicated the win to her grandfather who passed away while she was at a training camp earlier in the week.

The race for individual qualification continued for other members of Team USA in the earlier rounds.

London Olympian Dagmara Wozniak (Avenel, N.J.) held onto her No. 3 position in the National Team Point Standings with an 18th place result in Athens. Exempt from pools, Wozniak was seeded 11th in the table of 64 where she defeated Alessandra Lucchino (ITA), 15-9, before losing to Caroline Queroli (FRA), 15-14.

In the previous round, Queroli, who is ranked fourth in the junior world standings, also defeated four-time Junior World medalist Sage Palmedo (Portland, Ore.), 15-10. Ranked fourth in the National Team Point Standings, Palmedo is fighting to keep her position as the potential replacement athlete in Rio. Nineteen-year-old Palmedo is currently fending off 2014 Senior World Team Champion Eliza Stone (Chicago, Ill.) and 2013 World University Games Team member Faizah Muhammad (Maplewood, N.J.) As both Stone and Muhammad (younger sister of Ibtihaj) were eliminated on the first day of competition, neither earned points to move past Palmedo.

Monica Aksamit (Matawan, N.J.), a 2009 Senior World Team member, moved up to the No. 7 position in the standings after earning a 32nd place result in Athens. Aksamit advanced through the pool rounds and preliminary rounds on Friday and edged Bianca Pascu (ROU), 15-14, in the table of 64 on Saturday. Aksamit fell short in the 32, however, when she lost to 2015 European Games medalist Viktoriya Kovaleva (RUS), 15-12.

After a 45-35 win against Azerbaijan in the table of 16, Team USA fenced a close match against Korea with a 36-33 lead in the eighth when Wozniak withdrew due to an injury. Palmedo was substituted into the match and closed out the bout to give Team USA a 40-36 lead. In the anchor leg, Zagunis took the strip against 2012 Olympic Champion Jiyeon Kim. While Zagunis scored first, Kim answered with four straight touches. Zagunis took two of her own and went on to finish the match, 45-43, for Team USA.

In the semis against Russia, Zagunis had a critical 9-3 win against 2011 Senior World medalist Yuliya Gavrilova (RUS) in the second period to put Team USA into a 10-8 lead. Russia won or tied five of the next six bouts. With Russia leading, 40-34, at the start of her anchor leg against Velikaya, Zagunis outscored the 2012 Olympic silver medalist, 6-5, but Team USA still lost the match, 45-40.

Fencing for bronze, Team USA faced France, a team that took silver behind the Americans at the 2014 Senior Worlds. France controlled each of the first three bouts for a 15-3 lead. In the fourth, Palmedo took on Manon Brunet – a Senior World Team member who defeated Palmedo in the semis at the 2015 Junior Worlds. Palmedo scored seven touches and Muhammad picked up eight in the fifth against Saoussen Boudiaf – France’s young anchor who won individual bronze at the 2013 Junior Worlds. Zagunis defeated Charlotte Lembach, 11-5, in the sixth to cut France’s lead to 30-29. Palmedo and Muhammad struggled in the next two bouts and Zagunis found herself with a six-touch deficit in the anchor leg against Boudiaf. Zagunis fought back, outscoring her opponent, 12-2, to put Team USA within a touch of the podium at 44-42. Boudiaf scored twice herself to tie the bout at 44. The bronze medal, however, would slip away in an instant when Zagunis was carded for crossing her feet. The second penalty of the bout for Zagunis meant that France would receive a score and take the victory, 45-44.

Despite the loss, Team USA’s fourth place result meant that the U.S. Women’s Saber Team, which now sits in fourth on the Adjusted Olympic Rankings, will be guaranteed at berth to the Rio Olympic Games. Russia, Ukraine and France also are now guaranteed slots for their women’s saber teams in Rio. With positions secured for Zagunis and Muhammad due to their individual results, a field of Americans now have two international tournaments in February and March as well as the Division I Nationals in April to see who will earn the remaining two positions on Team USA.