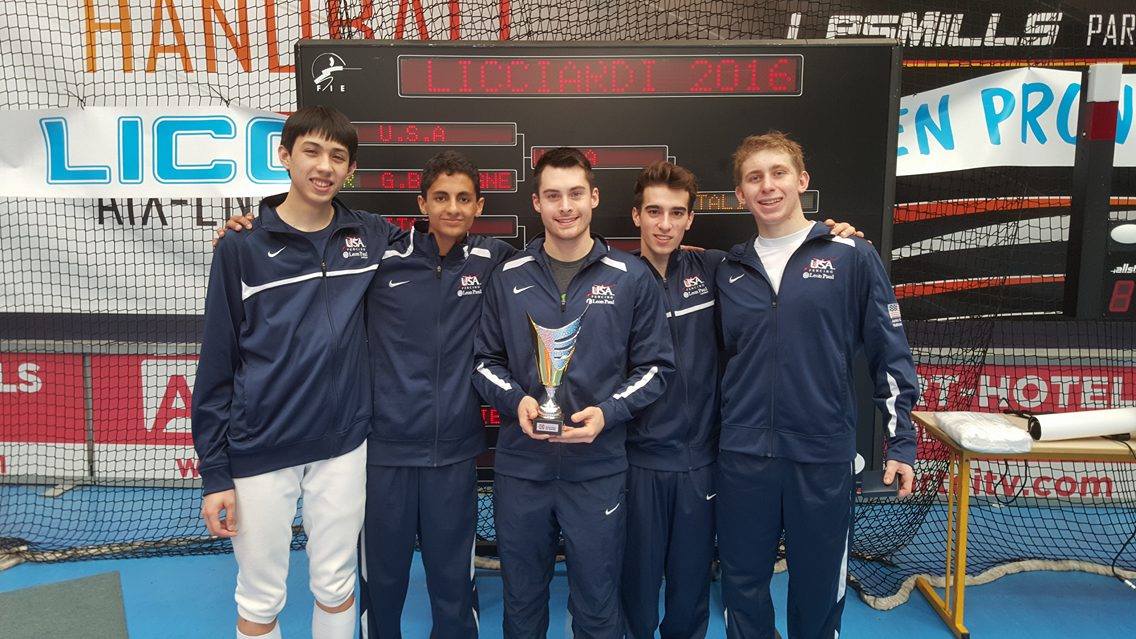 (Colorado Springs, Colo.) – Team USA’s men’s foil athletes won two medals over the weekend in Aix-En-Provence, France and ended the 2015-16 Junior World Cup season by establishing themselves as podium contenders for the Junior World Championships in Bourges, France in April.

On Saturday, 2014 Cadet World silver medalist George Haglund (Califon, N.J.) added a silver to the bronze he won in November in Bangkok.

Haglund would have an uphill battle in front of him as he finished 4-2 in the pools and as left with a 40th seed in the table of 128.

Haglund beat his seed with a pair of 15-10 wins in his first two direct elimination bouts against Samuel Insperger (HUN) and Mathias Danckwardt (DEN).

After two more victories with 15-11 scores against Tom Voltz (FRA) and Luis Klein (GER), Haglund advanced to the quarter-finals for the third time on the circuit this season.

In the quarters, Haglund fenced his teammate, Matthew Branman (Villanova, Pa.) A 2015 Junior World Team member, Branman was ranked eighth in the world at the start of the tournament and took the top seed in the direct elimination rounds after going undefeated in the pools.

Haglund won the bout against Branman, 15-9, and took advanced to the finals with a 15-12 win against Junior World No. 2 Alexandre Sido (FRA).

Haglund finished with a silver medal after a 15-12 loss in the gold medal final to Kenta Suzumura (JPN).

Just three tournaments remain before the Junior World Championship Team is named with the top four athletes in the Junior National Team Point Standings qualifying to represent Team USA. Haglund remains in the No. 3 position while Branman’s fifth place allowed him to move up from fifth to fourth, passing Nick Itkin (Los Angeles, Calif.) – a silver medalist at the Bangkok Junior World Cup who is seeking to qualify for his first Junior World Team.

Tourette’s top-32 result also allowed him to retain his No. 1 position in the Cadet Standings where he has mathematically locked his position on his second Cadet World Team alongside Itkin who sits in second.

Two former Cadet European Cup medalists, Andrew Machovec (East Rockaway, N.Y.) and Michael Li (Palo Alto, Calif.) are ranked third and fourth and will need to battle through the Junior Olympic Fencing Championships in Cleveland next weekend to see who leaves with a position on the Cadet World Team.

On Sunday, Tourette, Branman, Haglund and Julian Knodt (Palo Alto, Calif.) fenced in the team event where Team USA was fencing for both a podium finish and the opportunity to retain its No. 1 World Ranking.

In the table of 16, Tourette not only anchored Team USA to a 45-31 win against Belgium, but scored 21 touches for the Americans in his three bouts, including an 11-3 closing bout against Stef De Greef.

In the semifinals against Italy, Knodt and Tourette each earned key wins in the eighth and ninth bouts, respectively, with Knodt outscoring two-time Junior World team medalist Tommaso Ciuti, 10-5, and Tourette besting 2014 Cadet World medalist Guillaume Bianchi, 7-5. Haglund had two touches to make up in the anchor bout against Junior World No. 1 Francesco Ingargiola and scored two touches, but Team USA fell short and dropped the match, 45-40, to the reigning Junior World Team Champions.

Team USA fenced France in the bronze medal final in a rematch of the bronze medal match from the 2015 Junior Worlds where France came away with the win. Although Team USA trailed by three at 10-7 after the second bout, the Americans went on to win or tie seven straight bouts for a 45-32 victory.

The win allowed Team USA to retain its World No. 1 and increase its lead over Russia to 30 points. Italy is currently ranked third and France sits in fourth with only two tournaments remaining before the Junior Worlds.