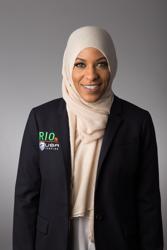 (Colorado Springs, Colo.) – Ibtihaj Muhammad (Maplewood, N.J.) was recognized by TIME Magazine on Thursday as one of TIME’s 100 Most Influential People for 2016.

A five-time Senior World team medalist, Muhammad made international headlines in January when she qualified for the 2016 U.S. Olympic Team as the first U.S. woman who will compete at the Olympic Games in a hijab.

After winning bronze at the Athens World Cup, Muhammad was featured in TIME, USA Today, CNN, The Ellen DeGeneres Show and hundreds of other media outlets around the world as she prepares to make history in Rio.

“I am grateful to the editors at TIME for including me among the world’s most influential individuals. I hope my presence as a Muslim woman on the United States Olympic Team inspires thoughtful and respectful dialogue that helps us find common ground and shared values,” said Muhammad. “Sport has the unique ability to bridge cultures. I hope that we continue to provide opportunities to women and girls to empower themselves through sport.”

“Each year our Time 100 list lets us step back and measure the forces that move us … There are world leaders and local activists, artists and athletes, scientists, moguls and a number of people who are running for President of the United States. One way or another they each embody a breakthrough: they broke the rules, broke the record, broke the silence, broke the boundaries to reveal what we’re capable of,” said TIME Editor Nancy Gibbs. “The people on the list, each in their own way, have lessons to teach. We can debate those lessons; we don’t have to endorse them or agree with them. But the influence of this year’s TIME 100, to my mind, is that down to the last person, they have the power to make us think. And they are using it.”