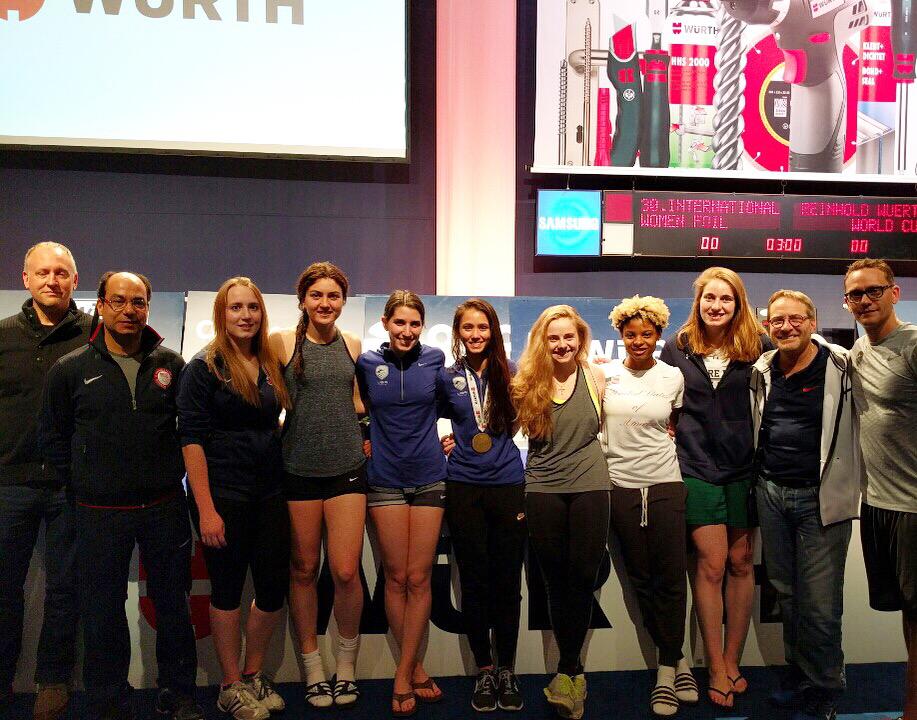 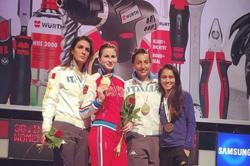 (Colorado Springs, Colo.) – Ranked No. 4 in the world, 2012 Olympian Lee Kiefer (Lexington, Ky.) won her third individual podium finish of the season on Saturday at the Tauberbischofsheim Foil World Cup in Germany.

Kiefer, who is aiming to win the first individual medal for a U.S. women’s foil fencer in Rio, was exempt from the pool rounds and won her first direct elimination bouts by a 15-4 score against Irina Kartukova (RUS).

In the table of 32, Kiefer fenced Saskia Loretta Van Erven Garcia (COL) – her opponent from the finals of the 2015 Pan American Games where Kiefer continued a six-year winning streak at Pan Am events. Kiefer dominated their bout, taking the win by a 15-4 score in just over two minutes.

Kiefer’s next opponent, Pauline Ranvier, was part of the French team that defeated Team USA in the quarter-finals of the World Team Championships last month. With a 13-6 lead after the first period, Kiefer went on to win the bout, 15-9.

In the quarter-finals, Kiefer fenced Chiara Cini (ITA) and, while the Italian came within a touch of tying the score at 7-6, Kiefer scored four straight to take the score to 11-6. With a 14-10 lead at the break, Kiefer scored the last touch early in the second period for a 15-10 win.

With a medal secured, Kiefer fenced 2015 Senior World Champion Inna Deriglazova (RUS) in the semis. The Russian took a 5-0 lead early in the bout and Kiefer was unable to fully recover as the Russian earned a 15-9 victory en route to taking the gold.

Kiefer’s 2012 Olympic teammate, Nicole Ross (New York City, N.Y.) advanced to the quarter-finals of an individual event for the third time this season.

Ross matched her sixth place finish at the Havana Grand Prix in March with her result in Tauberbischofsheim.

Exempt from pools, Ross outscored Yu Gong (CHN), 13-4, in the first period of her table of 64 bout and scored two quick touches in the second bout to earn a 15-4 win.

Ross controlled the beginning of her table of 32 bout against Adelina Zagidullina with a 7-3 lead, but the Russian came back in the second period to regain the lead at 12-11. Ross went on a 4-1 run, however, to steal a 15-13 victory over the 2016 Senior World Team Champion.

In the table of 16, four-time Senior World Team medalist Ysaora Thibus (FRA) led the bout at 6-4 when Ross scored 11 straight touches to leave Thibus stunned as Ross came away with a 15-6 win.

Nzingha Prescod (Brooklyn, N.Y.), who recently qualified to fence in Rio with Kiefer at her second Olympic Games, also was exempt from pools and went on an 11-touch run in the table of 64 to finish with a 15-4 win against Bella Kulaeva (RUS).

Prescod, a reigning Senior World bronze medalist, missed the table of 16, however, when she lost in the 32 to 2013 Senior World Team Champion Carolina Erba (ITA).

Twenty-year-old Jessie Laffey (Glen Ridge, N.J.) qualified for the table of 64 at a World Cup for the first time with a 3-3 result in pools on Friday and a 15-9 win over Sophia Werner (GER) in the preliminary table of 64.

Laffey drew No. 6 Aida Shanaeva (RUS) – a former World and Olympic Champion – in the table of 64. Shanaeva seemed unstoppable in the first period, scoring eight unanswered touches. Laffey didn’t give up, however, outscoring the Russian 11-5. Leading by only two touches at 13-11, Shanaeva took the two last touches of the bout for a 15-11 win.

In the table of 16, Sweden held a 10-8 lead after the first two bouts, but Ross shut out Gabrielle Gothberg Von Troil, 7-0, in the third to put Team USA up, 15-10. Ross went on to score 19 touches for the Americans as the United States built a 40-23 lead after the first eight bouts with Zeiss winning her first two bouts and tying a third. Prescod ended with a 5-3 win against Ester Schreiber in the anchor leg to secure a 45-26 victory for Team USA.

Kiefer returned to the lineup in the quarter-finals against Germany. Team USA won or tied each of the first seven bouts and advanced to the semis with a 45-38 win with Kiefer as anchor.

Although Prescod scored a key 7-5 win over 2014 Senior World individual silver medalist Martina Batini in the third bout of the semis against Italy, the 2015 Senior World Champions took the bout, 45-36.

In the bronze medal final, Team USA faced France in a close match in which each members of each team won four bouts going into the anchor leg. France held a 40-35 lead, however, and Thibus split the final bout, 5-5, with Ross as France ended with a 45-40 win.