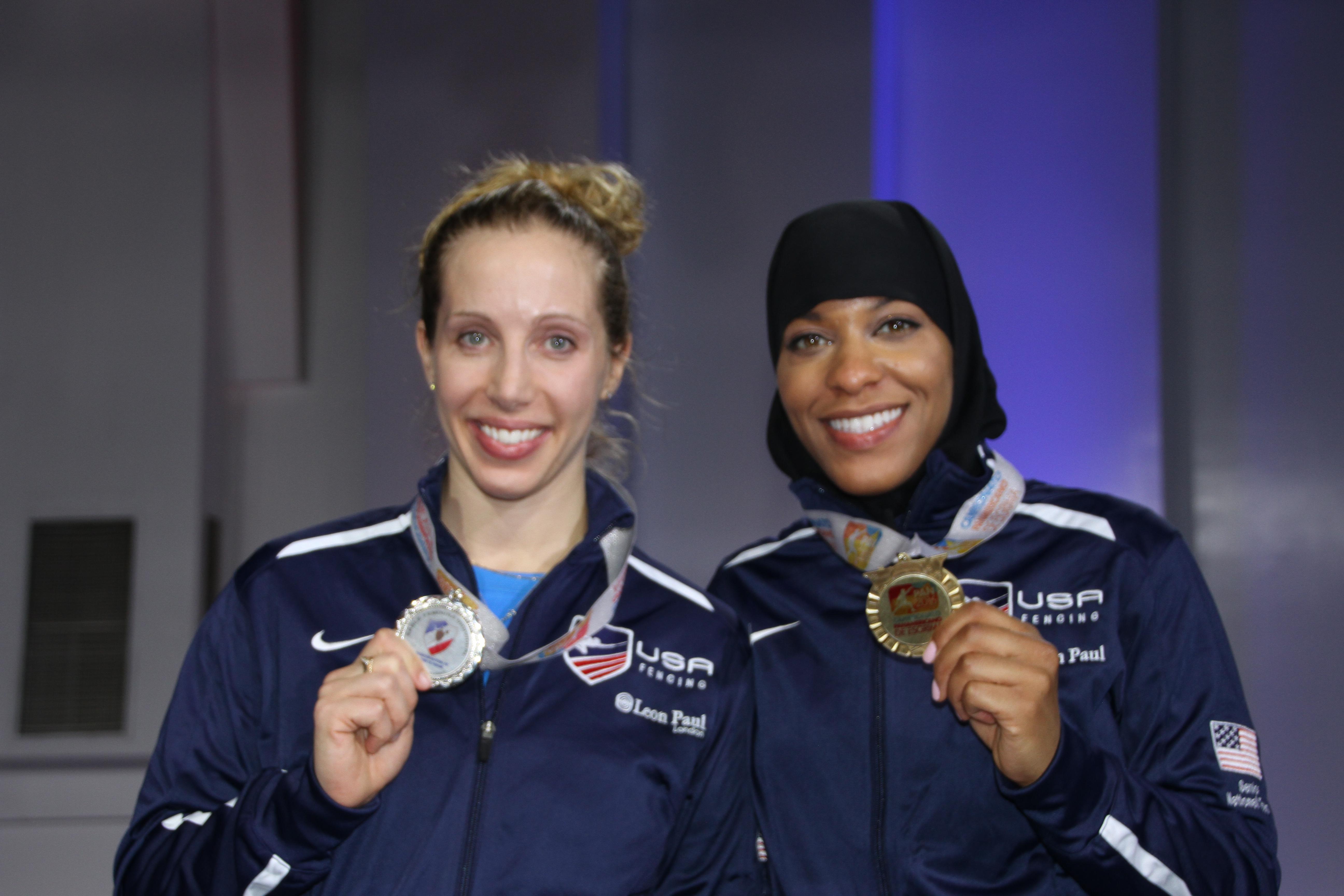 (Panama City, Panama) – A first-time Pan American Champion was crowned on when Ibtihaj Muhammad (Maplewood, N.J.) won the gold medal in women’s saber in the final seeding tournament before the Olympic Games.

Muhammad dropped a round in pools and entered the direct elimination rounds as the sixth seed behind Zagunis who was first and Monica Aksamit (Matawan, N.J.) who was third. Dagmara Wozniak (Avenel, N.J.), who will fence at her second Olympic Games with Muhammad, Zagunis and Aksamit, also dropped a bout and ended the round with an eighth seed.

Muhammad earned a commanding win over Ayudill Marie Colon (PUR) at 15-2 in the table of 32 and defeated Ursula Gonzalez Garate (MEX), 15-9, in the 16.

In the quarter-finals, Muhammad fenced Aksamit who didn’t give up more than six touches to either of her previous opponents.

Aksamit held an 11-9 lead during the second period before Muhammad answered with six of the next seven touches to end the bout at 15-12.

“Monica’s a very good opponent and that was always going to be a hard bout. It’s all about knowing where you’re scoring your points and being able to reflect on that in the moment,” said Muhammad who noted that strategy and focus were key to her win. “Knowing when to use your speed, knowing when to make your defensive action. It’s so tactical. You always have to think one step ahead of your opponent and I think I did a really good job of that.”

Down by two at the break against 2014 Pan American Champion Maria Belen Perez Maurice (ARG) in the semis, Muhammad came back in the second period to take a 13-11 lead. The Argentinian scored twice more to tie the bout at 13, but Muhammad scored two for a 15-13 win.

“I was really focused on being positive all day. I didn’t have the best day in pools and I could have lost any of my bouts, but I wanted to keep that positivity going and that’s what made the difference,” Muhammad said. “I know it sounds cheesy, but I kept repeating Muhammad Ali quotes to myself throughout the day and that really helped me think positively for each bout.”

On the other side of the bracket, Zagunis held each of her opponents to single digit scores, winning her first bout against Agostina Cielo Aguirre Caminotti (ARG), 15-6, in the 32 and her next two bouts by 15-7 scores against Julieta Toledo (MEX) and Alejandra Benitez (VEN).

Pliego held an 8-6 lead at the break, but Zagunis came back in the second period for a 13-12 lead. Pliego scored once more before Zagunis closed the bout, 15-13.

In the finals, Zagunis controlled the first period at 8-2 against Muhammad. Although Muhammad was prepared for a battle in the second, Zagunis talked with Coach Ed Korfanty (Portland, Ore.) during the break and a reaggravated injury caused Zagunis to medically withdraw from the bout in order to refrain from worsening the injury before the Olympic Games.

Muhammad’s win allowed her to move up to No. 8 in the world rankings while Zagunis sits in third behind No. 1 Sofiya Velikaya (RUS) and No. 2 Olga Kharlan (UKR) who won gold and bronze at the European Championships earlier this week. Wozniak, who lost to Benitez, 15-10, in the table of 16, will be 24th going into the Games.

Muhammad’s ranking returns her to within a position of her career-high No. 7 last year with two additional World Cup medals going into Rio.

“I feel so excited. I feel very blessed. It was a hard day because, after coming off the last Grand Prix and not doing too well, I’ve really just been focusing on executing my actions and being present in my bouts,” Muhammad said. “So it’s just very fulfilling to know that I was able to do that and do that well today. It was a long day and, even though I don’t feel like I was on my game at every moment, that positive energy that I was feeding myself all day was the difference between winning and losing.”

Jason Pryor (South Euclid, Ohio) won bronze at the 2015 Pan American Games and came to Panama seeking a return to the podium and crucial world ranking points to bolster his seeding in Rio.

Seeded fifth out of pools, Pryor had a close bout with Rolf Nickel (CHI) in the 32 where he took a 15-12 win before going on to defeat Alessandro Taccani (ARG) and Athos Schwantes (BRA) by 15-9 scores.

“My coach, Christian [Rivera], has a real simple plan. He’s all about ‘you’ve gotta hit them with the point before they hit you’ and I had a rough start at the beginning where I was throwing myself on the other guy’s point and Christian said ‘stop that’ and whaddya know? You do the reverse and bing, bang, boom and you win,” Pryor said.

Pryor fenced a strategic semifinal bout against Maxime Brinck-Croteau (CAN), taking a passivity call after the first period with a 1-0 lead and scoring three straight to open the second period at 4-0. With a 6-1 lead, passivity was called again and the bout was sent to the third period where Pryor closed out the win, 15-8.

Pryor took a 7-4 lead against Yunior Reytor Venet (CUB) in the first period of finals, but the Cuban tied the bout before pushing on to a 15-14 win.

“It wasn’t ideal, but my fencing was good today. It’s always salty when you get silver, but I picked up points I desperately needed for the Games and there’s a much bigger picture on the horizon,” Pryor said. “I’m disappointed, but there’s a bigger scheme to happen. Besides, it’s done now. I’ve already forgotten about it.”