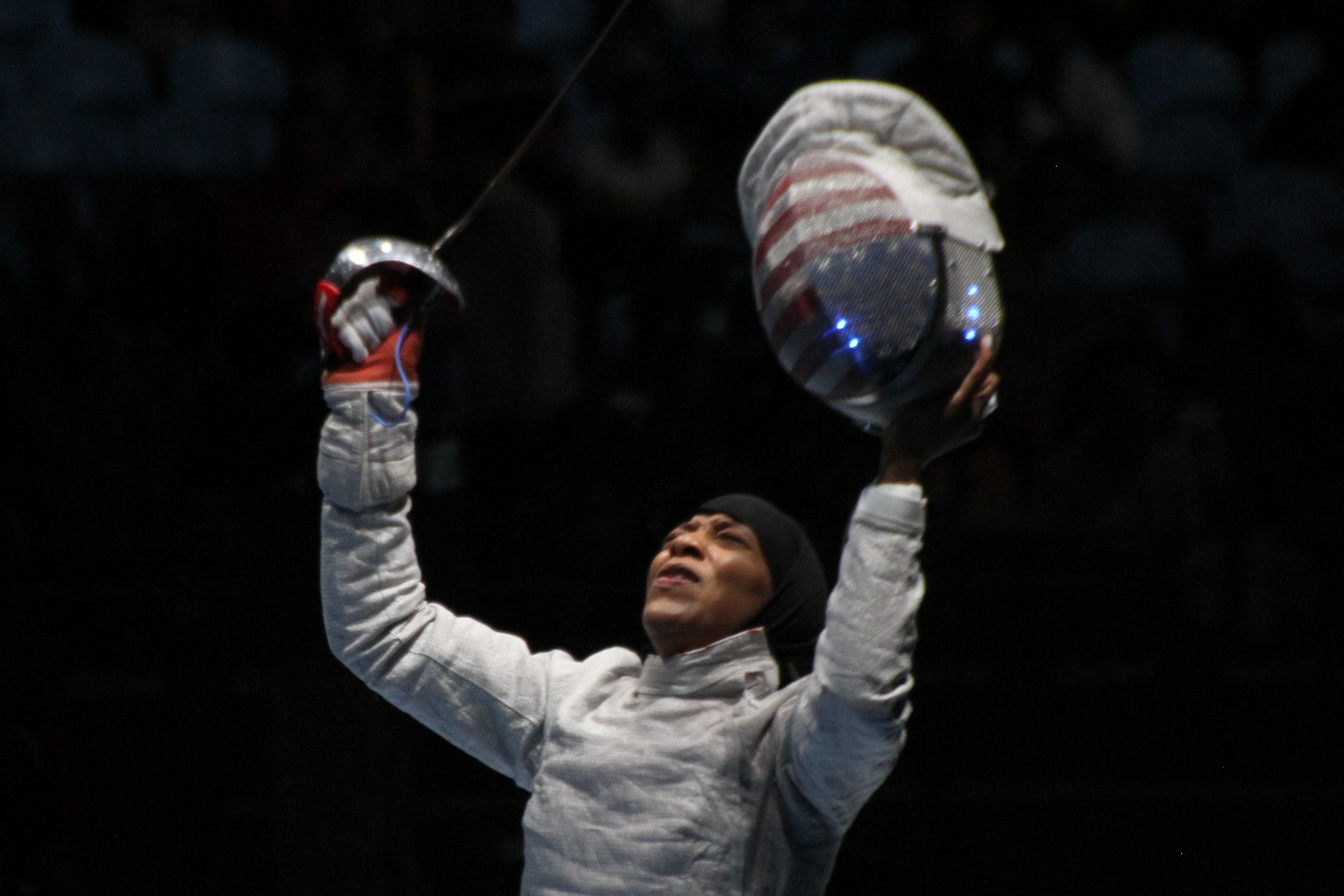 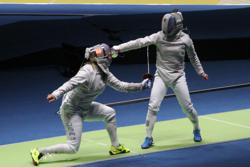 (Rio de Janeiro) – Both Mariel Zagunis (Beaverton, Ore.) and Ibtihaj Muhammad (Maplewood, N.J.) came into the Olympic Games in the spotlight when the women’s individual saber event began on Monday.

As a two-time Olympic Champion, Zagunis aimed to win the third gold that eluded her when she finished fourth in 2012.

Meanwhile, Muhammad became one of the most recognized athletes at the Olympic Games after she qualified for Team USA and was set to be the first U.S. woman to compete at the Games in a hijab.

Ranked No. 3 in the world, Zagunis did what she came to do in the table of 32 – picking up a dominant victory over Eileen Grench (PAN), 15-4, after holding an 8-1 lead at the break.

In the table of 16, however, Zagunis was challenged by two-time Senior World Team Champion Ekaterina Dyachenko (RUS).

Zagunis countered Dyachenko’s 8-5 lead after the first period with three touches to tie the bout at eight in the second. The Russian pulled away to 11-9 and finished the bout, 15-12.

“I didn’t stick to my game plan which was the most important thing. I went too fast off the line ... For me to rush as much as I did, I wasn’t patient enough for my attack off the line,” Zagunis said. “My game plan was to take advantage of the fact that she was going to make me fall short, but instead, I fell into her trap.”

Zagunis said the early loss serves as extra motivation for the team event on Saturday.

“I think we’re all going to be really fired up. I think today was, I can just speak for myself, a pretty disappointing day. It’s just more motivation, more fuel to the fire to make sure we’re geared up for team,” she said.

Muhammad won her opening bout against Olena Kravatska (UKR), 15-13, to take an early victory at her first Olympic Games.

Muhammad was laser focused on her next opponent, four-time Senior World medalist Cecilia Berder (FRA) and opened with a 6-2 run. Berder stayed in the bout, however, and scored six of the next seven touches for a 8-7 lead at the break.

“It’s frustrating that I wasn’t able to close out the first half of the match and be 8-2 at the break. But then I was down, 7-8. That was probably the most frustrating moment throughout the match,” Muhammad said. “There’s some things I can do a little bit better in fencing, but this all comes down to controlling your nerves.”

Muhammad scored five touches in the second period, but lost the bout, 15-12.

“I always say that, in a sport like fencing, you’re your biggest opponent. If you can control yourself and your nerves and your emotions and execute your actions in the way that you want to execute, you’ll always be successful and I wasn’t able to do that today,” Muhammad said.

Reflecting on her experience, Muhammad acknowledged that stepping onto the strip the first time was a significant moment.

“I realize that this moment is bigger than me. No matter what happens in my life, I try to accept it for what it is. Whether it’s winning or losing. I realize that, with hard work, sometimes you may fall short,” Muhammad said. “I’ve worked so hard for this moment and, at the end of the day, this moment of me in sport and representing my country and the Muslim community is bigger than myself. I always end every single match with the same sentiment and that’s that I’m thankful to God for the experience and allowing me to even be present in this moment.”

Two-time Olympian Dagmara Wozniak (Avenel, N.J.) battled injuries that kept her out of nearly half the season’s World Cups, but the 2014 Senior World Team Champion had her heart set on breaking through with a medal on the Olympic stage.

Her run came to an end in the table of 32, however when she lost to Vassiliki Vougiouka (GRE), 15-8.

“She’s very dominant. She’s very aggressive. If you’re not ready to move on your feet, it’s very hard to get out of the way. She has very good footwork and she’s really tall and long,” Wozniak said. “Sometimes in women’s fencing, or even men’s saber, you don’t necessarily see really tall people being very well coordinated and really have great explosion, and she has that. She has very good control over her body and she was able to move me around and in the end, it worked in her favor.”

Wozniak also reiterated Team USA’s desire to reach the top of the podium on Saturday when she fences with Zagunis, Muhammad and replacement athlete Monica Aksamit (Matawan, N.J.)

“Gold. There’s nothing less,” Wozniak said when asked what she wanted out of the team event. “I don’t expect anything less for my team … I really believe in my team and I feel we’re really strong and can dominate, so I see us in the final.”