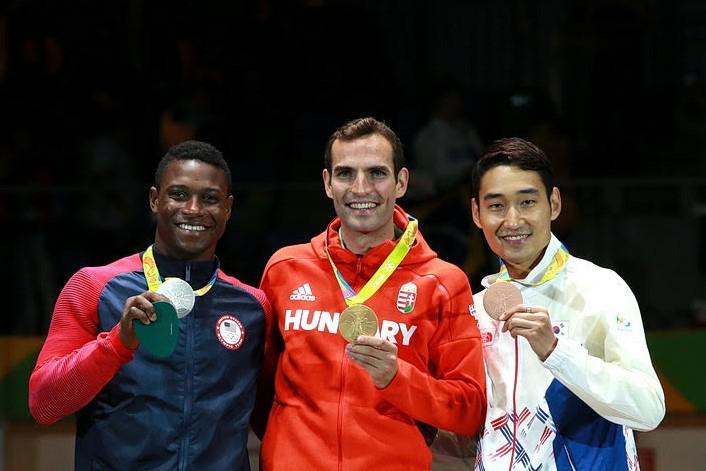 (Rio de Janeiro) – The history books were rewritten again on Wednesday as Daryl Homer (Bronx, N.Y.) put an end to a hard fought season with the one thing he has been fighting for since placing sixth in London – an Olympic medal.

The length of time since the last individual men’s saber silver for a U.S. fencer was 112 years since William Grebe accomplished the feat in 1904 – or more than four times the life span of a 26-year-old who wanted to follow his 2015 Senior World silver with some Olympic hardware.

The win marked the second medal for USA Fencing this week and the first time two U.S. men’s individual medals have been won at the same Games since 1904 after foil fencer Alex Massialas (San Francisco, Calif.) brought home the silver on Sunday.

“It feels great that we have such a strong team … We’re working hard, we’re competing with each other, inter-weapon squads. I was speaking to some of the men’s foil guys and I’m like: ‘I know you guys have a really good shot at winning a medal in team’, so I wasn’t going to be the friend that didn’t have a medal,” Homer said. “We are very competitive with each other and it’s great and I love that.”

Homer, whose top-10 world ranking gave him a bye into the table of 32, fenced Ilya Mokretcov (KAZ) in his first direct elimination round and won the bout, 15-11.

Homer was up by six at 9-3 in the quarter-finals when Matyas Szabo (GER) mounted a comeback in the second period. The American held Szabo off, however, to finish the bout at 15-12 and secure himself a position in the semifinals.

Homer’s semifinal opponent, Mojtaba Abedini (IRI) was having the day of his life and took an early lead against Homer who fought back with five straight touches to end the first period with a 8-6 advantage. In the second period, Homer was leading the bout, 12-9, when Abedini fought back to tie the score first at 12 and again at 14. Homer launched an attack and scored the winning touch.

“I think that the main thing is that I stopped the bout a little bit. I don’t know if you guys realized that and I took a little bit longer to get en garde, but I’m like, ‘You know, he might cut a different place, he might not, but you’re going for it and you have to lose on your own sword,’” Homer said. “You can’t fall down. I didn’t want to lose on something he initiated. I wanted to lose on something that I believed would work, if that was a possibility, but I did believe it would work obviously. If you want the medal, you have to do something big for it.”

“I think I just overthought the match a little bit, got a little bit of the heebie jeebies. We’ve competed together since we were 16 – cadet, junior, senior – so we know each other very, very well. But, you know, he’s a great competitor and the returning Olympic Champion, so I tip my hat off to him,” Homer said.

The win comes on the heels of a season in which he watched his world ranking fall from a high of No. 5 to a low of No. 12.

“The hardest part of the journey would definitely be the season. I struggled a lot individually. Luckily we did amazing as a team. We’re currently ranked No. 2 in the world. I struggled with my own confidence this year after climbing the podium last year in Moscow at the World Championships,” said Homer who noted that he performs best at major events. “I just perform way better on bigger stages and that’s what all the other guys are saying. They’re like, ‘This guy always shows up when it counts.’ I just love the pressure of it and I Iove being free and I love putting all the marbles on the table and seeing who’s going to get them. I’m an all or nothing dude.”

Homer’s teammate, Eli Dershwitz (Sherborn, Mass.) made his Olympic debut in Rio, but was eliminated after a 15-12 loss to Seppe Van Holsbeke (BEL).

“It really just flew by. It feels like it was a lot shorter than normal bouts. I really wasn’t moving as well as I would’ve liked to. I think I usually move on my feet a little more in and out and up and down the strip,” Dershwitz said. “I thought I was getting caught on a lot of long run just from my opponent. I feel like I prepared to the best of my ability, but today I just wasn’t there where I wasn’t feeling my absolute best on the strip.”

Competition for the team events begins on Thursday with the women’s epee events where Team USA will attempt to return to the podium after winning bronze in London.