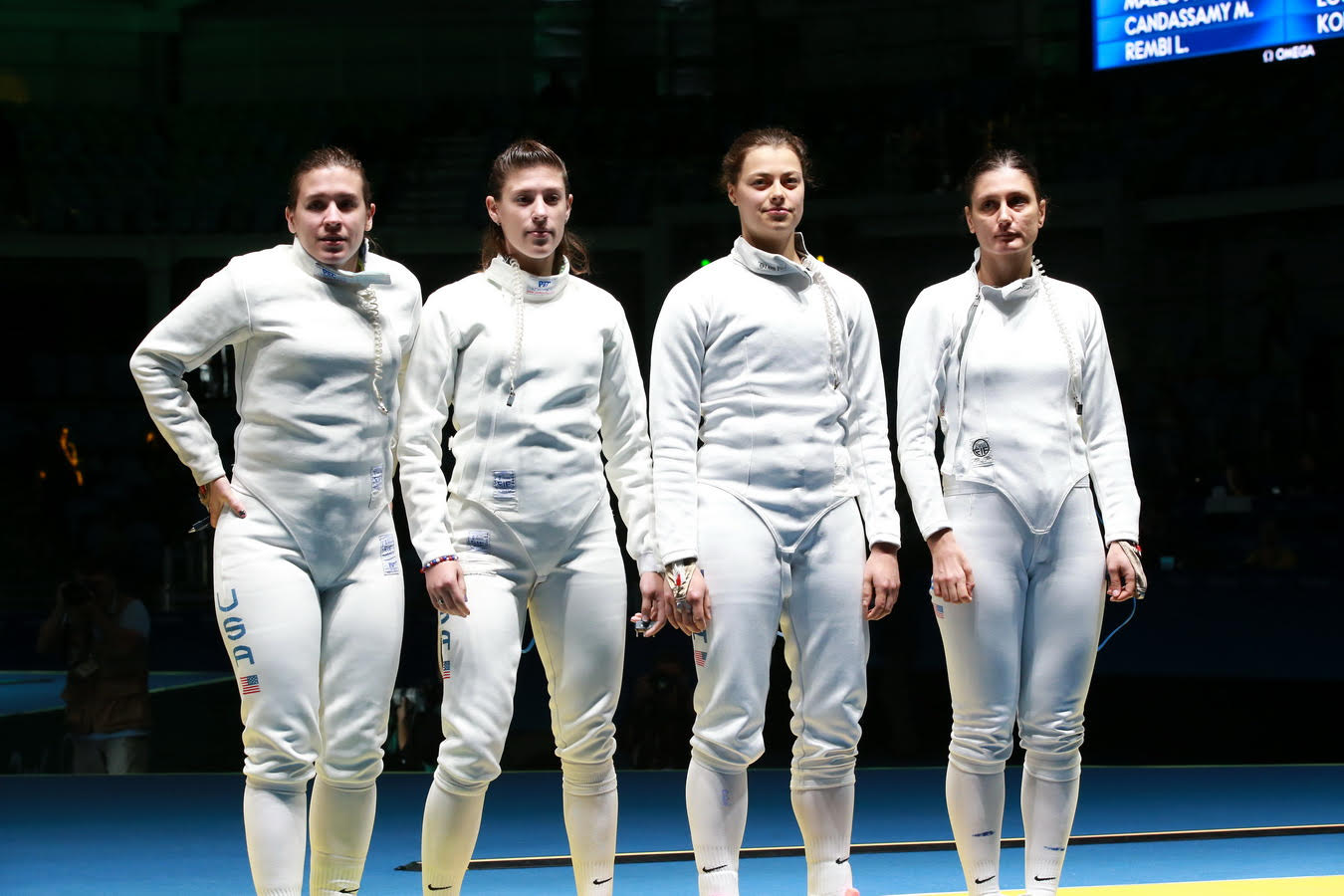 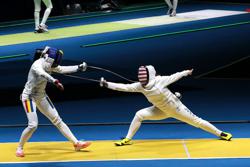 (Rio de Janeiro) – While the U.S. Women’s Epee Team won bronze at the 2012 Olympic Games, Team USA came into Rio on Thursday as the seventh seed in the table and drew Romania, the 2015 Senior World silver medalists, in the first round.

The Americans kept the bout low scoring as 2012 Olympians Courtney and Kelley Hurley (San Antonio, Texas) and first-time Olympian Kat Holmes (Washington, D.C.) kept the Romanians within a handful of touches throughout.

“The whole match, when we got down, we tried to stay optimistic and tried to stay in good spirits. In the past when we fenced Romania, I think one of the big reasons why they kill us so badly is we kinda fall apart in the middle and we just lose hope really quickly,” Kelley Hurley said. “For this match, we practiced and focused on staying happy, staying positive. They have all the pressure on their shoulders. We were the underdogs.”

With Romania only up by one at 16-15 at the start of her anchor bout, Courtney Hurley tied the bout at 16 and went on to score three singles to put the U.S. team ahead by two touches at 19-17. A silver medalist with the Romanian team at the 2008 Olympic Games, Ana Maria Popescu fought back to tie the United States at 23 in the final minute.

In a moment reminiscent of the 2012 Games where Courtney Hurley also fenced in sudden death overtime to secure bronze for Team USA, the two-time Olympian faced off against Popescu, but it was the Romanian who put up the single light needed for a 24-23 victory.

The bout would be the closest of the day for Romania who would go on to win gold.

“Romania [is] the one team on the circuit that we’ve never beat,” Holmes said. “We knew that it was going to be a hard match. We’ve gotten our butts kicked by them in the past, so for the past month, we’ve really worked on video analysis, and then applying that to technical lessons.”

Despite the loss, the Americans were pleased with how they fenced the bout.

“We came up with a plan and we executed that plan. I don’t think we could’ve fenced a more perfect bout. All of us, we played our part, we did what we set out to do, and in epee -- I said this in the individual -- but in epee anything can happen and in overtime anything can happen,” Holmes said. “It did not go our way this time, but we can walk away from that bout knowing that there’s absolutely nothing more that we could’ve done.”

After the loss, the Americans would need to fence two more matches to determine their placing in the 5th – 8th place table.

Team USA would take on France first following a quarter-final in which France led Russia for most of the match by as many as five touches before falling to Russia, 44-41.

While both teams were still heartbroken from their losses, the Americans dug deep and won five of the eight bouts to give Courtney Hurley a 22-21 lead going into the final bout where she defeated Auriane Mallo, 10-7, to give Team USA the win at 32-28.

Showing the depth of the field in women’s epee, the bronze medalists from 2012 would fence Korea, the silver medalists from London, in a match for fifth place.

Team USA won or tied five of the first six bouts in a low-scoring match.

With the United States up by one at 9-8, Katarzyna Trzopek (Redwood City, Calif.) was put in for her first action of the Games.

Trzopek gave up just one touch to Eunsook Choi before taking a passivity call with the score tied at nine.

Kelley Hurley took another passivity call and Courtney Hurley returned to the strip for her final anchor performance of the Games, taking on Injeong Choi in the final bout.

“I’ve actually probably only lost once to her before, so I felt confident. It’s rough that there are so many touches left so anything can happen … but I was confident,” Courtney Hurley said.

Korea stayed close for much of the bout, but, with the score tied at 12, Hurley ran away with the end of the match, outscoring Choi, 13-9, as Team USA earned the fifth place win, 22-18.

“Courtney, she’s such a great fencer and it’s hard to go out there and have all the pressure on your shoulders. She does that. She puts it all on her shoulders and she feels so sad if she doesn’t win because she feels like she let the whole country down,” her older sister said. “It takes a lot of person to deal with that. We did all we could do, she did all she could do.”