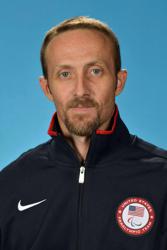 (Colorado Springs, Colo.) – Joey Brinson (Florence, Miss.) has been named to the U.S. Wheelchair Fencing Team that will be competing at the Rio Paralympic Games after the U.S. Olympic Committee received a reallocated wheelchair fencing slot due to the suspension of NPC Russia by the International Paralympic Committee.

On Tuesday, the Court of Arbitration for Sport confirmed the suspension of NPC Russia. Consequently, no Russian athlete may enter the Rio 2016 Paralympic Games in any sport. All 267 qualification slots previously held by NPC Russia were returned to the IPC, which has the authority to redistribute these slots to any athlete in any sport.

A 2012 Paralympian and four-time Wheelchair World Championship Team member, Brinson was selected by the International Paralympic Committee to compete in the Category B men’s individual saber competition.

Brinson is ranked No. 1 in the nation in men’s saber and No. 17 in the world in Category B men’s saber.

Winning the silver medal at the Pan American Wheelchair Championships in May, Brinson came up just short of the needed gold which would have qualified him for Rio. A month earlier, he earned the gold at the Wheelchair National Championships.