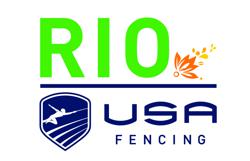 (Colorado Springs, Colo.) – During the months of September and October, USA Fencing will be honoring the achievements of our Olympians who brought home four medals from the Rio Olympic Games.

USA Fencing Celebrates Rio will feature celebrations in five cities throughout the nation:

Each city will host a series of events in which fans can meet Olympians and Paralympians, try fencing for the first time and hear about the athletes’ experiences at the Games in Rio. Special VIP events also will be hosted in each of these cities, including cocktail hour and dinner with members of the 2016 U.S. Olympic and Paralympic Fencing Teams.

The U.S. Olympic Fencing Team had one of its most successful Games in history in Rio where the Americans brought home four medals, including individual silvers from men’s foil fencer Alexander Massialas (San Francisco, Calif.) and men’s saber fencer Daryl Homer (Bronx, N.Y.) as well as team bronzes in men’s foil and women’s saber.

The first host of the USA Fencing Celebrates Rio series will be on Sept. 4 in San Francisco. Hometown fencer Massialas will be joined by women’s epee Olympian Katarzyna Trzopek (Redwood City, Calif.) as well as two-time Olympic Champion Mariel Zagunis (Beaverton, Ore.) and Dagmara Wozniak (Avenel, N.J.) who won bronze together in the women’s team saber event in Rio.

For more information on how to see members of Team USA in San Francisco, visit www.usfencing.org/celebraterio-sanfrancisco.

Visit this page for details in the coming weeks on where to meet members of Team USA in a city near you.