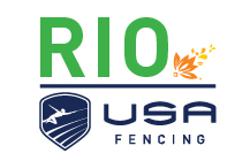 The USA Fencing Celebrates Rio tour will arrive in Detroit this weekend as members of the U.S. Olympic and Paralympic Teams come to the October North American Cup to join the nationwide USA Fencing family for the first NAC of the new season.

Local clubs will be participating in fencing demonstrations and the Detroit community will have the opportunity to try fencing as well.

On Saturday, a VIP reception will be held at the Cobo Center Ballroom with Pryor, Brinson and 2016 Paralympian Lauryn DeLuca (Parma, Ohio). Admission is $25 and includes two drinks as well as hors d’oeuvres. Tickets to the reception are limited and can be purchased online here.

Following the conclusion of the Division I women’s epee finals at 7 p.m., members of Team USA will be recognized on the finals stage in Hall B and C at the Cobo Center. Members of the USA Fencing community are invited to celebrate Team USA athletes, including Pryor, Brinson, Deluca and U.S. Women’s Epee Team fencers Kelley and Courtney Hurley (San Antonio, Texas) and Kat Holmes (Washington, D.C.) The celebration will include an Olympic cake as well as a photo and autograph session with the Olympians and Paralympians.