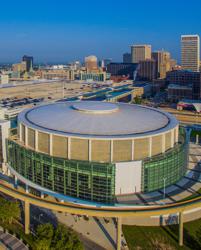 (Colorado Springs, Colo.) – On the heels of a successful Olympic Games in Rio, the North American Cup circuit will kick off the 2016-17 season in Detroit from Oct. 7-10 at the Cobo Center, 1 Washington Blvd.

The four-day competition begins on Friday and runs through Monday with events including more than 1,800 fencers, including members of the 2016 U.S. Olympic and Paralympic Teams.

Events will be held in each of the three weapons (epee, foil and saber) in the following categories: Division I, Wheelchair, Cadet (U17) Individual, Cadet Team and Division II.

Among the athletes scheduled to compete include the following members of the 2016 U.S. Olympic and Paralympic Teams:

Competition will begin daily at 8 a.m. and will conclude at approximately 8 p.m. The Division I events will serve as the one of the first qualifying events for the 2017 Senior World Championships while the cadet events are a key portion of the qualifying process for the 2017 Cadet Worlds.

In addition to fencing action, members of the community will have the opportunity to meet members of the 2016 U.S. Olympic and Paralympic Teams as the USA Fencing Celebrates Rio tour comes to Detroit.

This hometown tour, which previously included stops in San Francisco, New York City, Houston and Portland, is an opportunity for fans to celebrate Team USA’s four medal wins at the Olympic Games as well as meet the fencers and be introduced to the sport for the first time.

The schedule for the USA Fencing Celebrates Rio in Detroit is as follows:

USA Fencing Family Celebration – Cobo Hall B and C Finals Stage
7 – 8 p.m.
Members of the 2016 U.S. Olympic and Paralympic Teams will be recognized on the finals stage in Halls B and C. Come meet U.S. Olympians and Paralympians and Celebrate Rio with cake and autograph signings.
Free and open to the public.

Visit www.usfencingresults.com for complete rosters and seeding for each event.

Competition schedule for the NAC is as follows (note: all times listed are estimated start times, not check-in times):