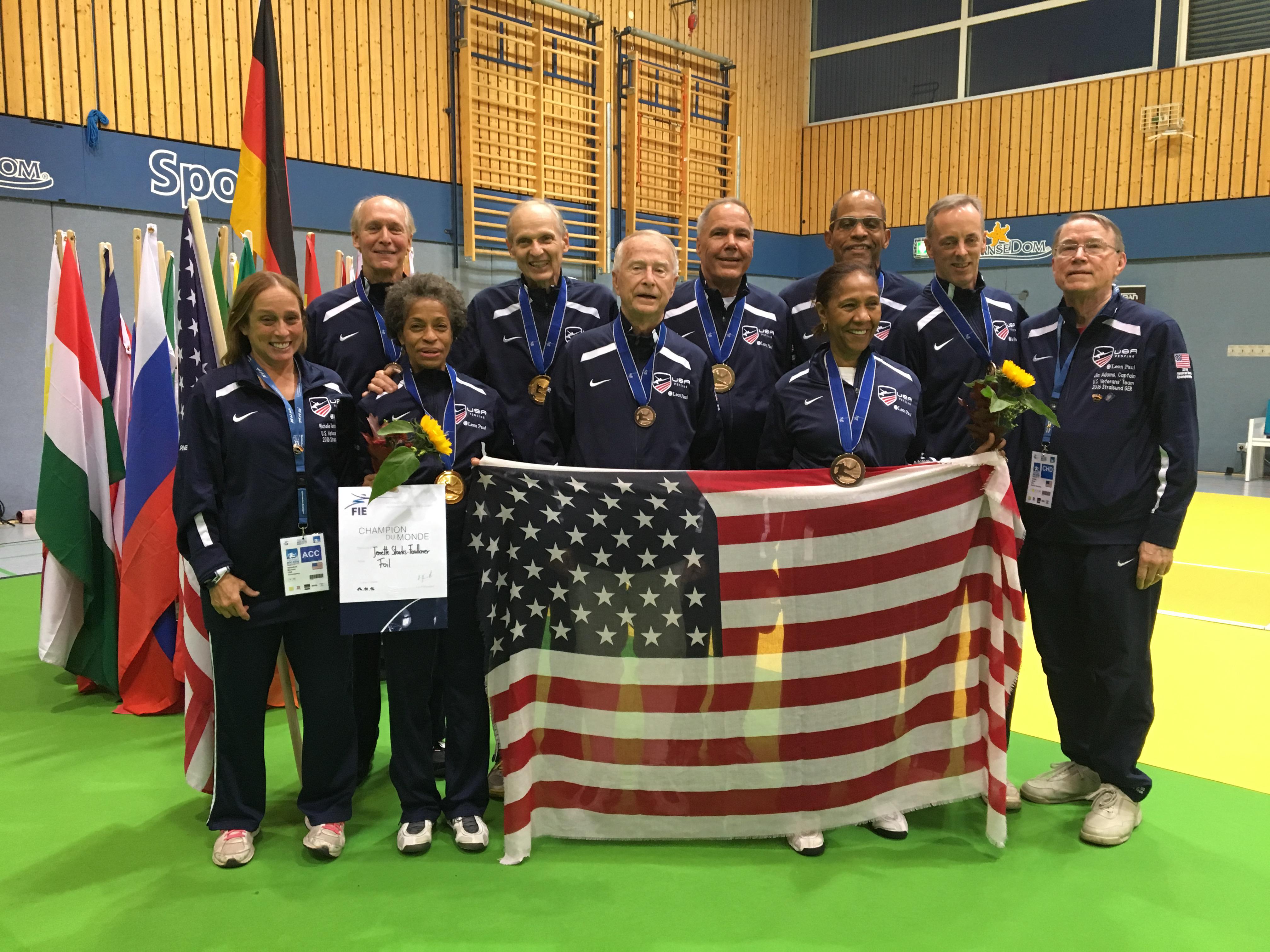 (Colorado Springs, Colo.) – Team USA had its most successful day of competition yet on the fourth day of the Veteran World Championships in Stralsund, Germany on Friday, winning six medals, including golds from Jennette Starks-Faulkner (Middletown, Conn.) and Arnold Messing (Brooklyn, N.Y.)

The six-medal haul brought Team USA’s medal total for the Championships to 12 with two days remaining in the competition.

In men’s epee, three Americans won their first Veteran World Championship medals. With his gold, Messing became the first American, man or woman, to win the +70 epee event since the +70 category was introduced in 2009. Frank Hewitt (Jamul, Calif.) and Daryl Taylor (Los Angeles, Calif.) each won bronze in the men’s +70 and men’s 60-69 epee, respectively.

The men’s saber team also earned the Americans’ first team medal of the competition with a bronze.

Both Starks-Faulkner, who won gold in this event in 2014, and Walters, the reigning Vet World Champion, went undefeated in pool play, earning the No. 1 and No. 2 seeds, and defeated their table of 32 opponents 10-1. Starks-Faulkner cruised through the next two rounds with a 10-2 victory over Laura Grande (ITA) in the table of 16 and a 10-4 win over Corinne Aubailly (FRA) in the quarterfinals while Walters, competing at her 11th Vet Worlds, edged out Jennifer Morris (GBR), 7-6, and Jane Clayton (GBR), 10-7, to guarantee a spot on the podium.

In the semifinals, Starks-Faulkner controlled her bout against Kaoru Amari (JPN), 10-5. The final saw the five-time Vet World medalist earn a 10-8 victory over Annabelle Ballard (AUS), who had ended the day of Walters in the previous round on the final touch, 10-9.

Beginning the direct elimination rounds of the men’s 60-69 epee competition with a narrow 6-5 victory over Pawel Krawczyk (POL) in the table of 64, Taylor then bested Philippe Pfulg (SUI), 10-2, and Thomas Merky (SUI), 10-6. After defeating Mark Ballard (CAN), 10-4, in the quarters, Taylor fell 10-4 in the semis to Francois Gaudry (FRA), 10-4, winning his first Vet Worlds medal in his second Veteran Worlds appearance.

Two rounds earlier in the round of 16, Gaudry defeated Drew Ridge (Warminster, Pa.), 10-9. Ridge started his day with a 10-3 win over Peter Blaksteen (DEN) before defeating Eiichi Ide (JPN) on the final touch, 10-9.

Charles Schneider (Novi, Mich.) and Thomas Henzler (Houston, Texas) also competed for the U.S. with both falling by a single touch in the table of 64.

In the men’s +70 epee event, Messing’s journey to gold began with a bye to the 32, where he beat Jean Luc Lenoir (FRA), 8-6. He then overcame Masashi Narita (JPN), 8-5, setting up a quarterfinal match-up with teammate Bruno Goossens (Jacksonville, Ore.) Messing took the bout 10-8, coming back from a 4-0 deficit to secure a medal. Messing defeated Reinhard Muenster (GER), 10-7, in the semifinals and easily handled Wolfgang Vehrs in the final, 10-4.

To claim his bronze, Hewitt shut out Ilkka Seppanen (FIN), 10-0, in the table of 32 and beat reigning champion Winfried Suchanek (GER), 10-7, in the 16. Hewitt had no problems with the 2014 champion, William Osbaldeston (GBR), in the quarters, winning 6-0, but came up one point shy of facing Messing in the finals with a 10-9 loss to Vehrs.

Two other members of Team USA earned top 16 finishes with Goossens finishing fifth and Jonathan Jefferies (Alameda, Calif.) taking ninth place. Goossens defeated Per Svensson (SWE), 10-5, in the 32 and Ermes Cassago (ITA), 10-9, before falling to Messing. Jeffries advanced to the table of 16 with a 10-3 victory over Dieter Allkaemper (GER), but lost 9-3 to Osbaldeston in the next round.

The gold medalists at the last two Veteran World Championships, Team USA dominated its pool bouts, defeating Spain, 30-9, and the Netherlands, 30-16. In the quarterfinals, the Americans beat France 30-22 but would not get to defend their title as they fell 30-26 in the semis. However, the U.S. rebounded for a 30-19 victory over Russia to bring home bronze.

In the women’s +70 foil competition, Ruth Dodge (Loudon, N.H.) earned a bye to the table of 16, where she fell 10-3 to 2015 bronze medalist Judith Hendricks (AUT). Her three teammates, Diane Reckling (White Plains, N.Y.), Bettie Graham (Washington, D.C.) and Mary Turzillo (Berea, Ohio), each lost in the table of 32.